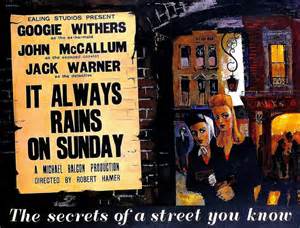 It Always Rains on Sunday

"It's flattering to make a picture which becomes a classic within 10 years; it's not so flattering, however, when people get the impression it's the only picture you've ever made."
~ Robert Hamer (on the reputation of Kind Hearts and Coronets)

The ill-starred Robert Hamer was hand picked by Ealing Studios head Michael Balcon to rise from editor to director with a section of the four-part, anthology thriller Dead Of Night  in 1945. Hamer distinguished himself with a spine chilling section about a haunted mirror, starring the inimitable Googie Withers, an actress who would become his muse in two other excellent features, Pink String and Sealing Wax  and the stunning Brit Noir, It Always Rains on Sunday.  The latter gives a brutal and clear eyed picture of a post WWII working class suburb in the East End, a world away from the light, entertainment heavy fripperies that Ealing had made their name with. The films stark realism ranks with the much vaunted neo-realism of the post war Italian cinema and stands along side the best American docu-noir of the same period, particularly the films of Elia Kazan and Jules Dassin.

Rose (Googie Withers) is a former barmaid who has settled for domestic drudgery in the working class, East End suburb of Bethnal Green. Rose is neck deep in keeping her busy household functioning when an unexpected visitor turns up in the family air raid shelter. Tommy (John McCallum) is Rose’s former lover who has escaped from prison and is on the run from the law. George (Edward Chapman) is Rose’s unglamorous, hard working but dull husband, who expects Rose to look after his every needs as do her ungrateful teenage children. Rose has to confront the shadows of her past and juggle the needs of her current family as she looks to a future that has suddenly become far less certain.

In the immediate aftermath of World War Two, where areas like the East End suffered hugely during The Blitz, Hitler’s strategy to bomb Britain into submission, the plucky common Londoner was picking up the pieces. Rose is a survivor, a woman who has raised a family through this perilous period, carrying on and keeping calm in the face of enormous stress. But Rose is also a woman who has settled for less, leading a mundane existence after having tasted life on the edge in her younger years. Tommy shows up like an incendiary device dropped from the skies, and Rose has an explosive set of circumstances to juggle, as she confronts the fact she still has feelings for Tommy.

Robert Hamer’s gritty fable is a delicate and nuanced dilemma about the road not taken, filmed with the influences of French Poetic Realism front and centre. Hamer uses an unexpected melding of the French visual style, crossed with a documentary like realism more akin to the Italian Neo-Realism of the time, to produce an entirely English take on fate and longing. Some of the night time shots of rail yards and rainy streets are pure Carné from the immortal Port Of Shadows,  while the hustle and bustle of the market scene owes something to the large and much vaunted street scenes of Les Enfants du Paradis.  Not only do the visuals align with the French style, but also the fatalism surrounding Tommy, as he seems to be as condemned to play out his hand to the bitter end as any of the famous Jean Gabin roles of the 1930’s in masterpieces like Pepe Le Moko  and Le Jour Se Leve.

Googie Withers was one of the unsung stars of post war British cinema, a ballsy actress with a startling presence, the antithesis of the fey Margaret Lockwood or Celia Howard heroines of the time. She delivers a first rate characterisation as Rose, conflicted and confused as she’s pulled between competing emotions. This type of performance was rooted in a frank realism and also pre-dates the much hyped ‘method’, both tender and tough at the same time. It’s hard to think of an American equivalent, (maybe Shelley Winters) but Googie beat the kitchen-sink luvvies and the working class essays of the British New Wave to it by a decade at least. Jules Dassin gave her one of her best roles 3 years later when he fled the Hollywood blacklist and directed the superb noir Night and The City  in London for Zanuck, a Dicky Widmark Wrestling pic! Rose, as realised by Googie Withers is simply one of the great English screen performances, a tribute to Hamer’s ability to extract the best from this remarkable actor.

John McCallum met Googie in 1947 in the film that she made preceded this one, and they married early in 1948. McCallum was an Australian actor and the couple moved to Australia in 1959 where they promptly became fixtures in the theatre and film world.  McCallum provides a strong and magnetic presence as the criminal on the run, the antithesis of the stolid George, and the seduction scene with Rose is particularly racy for the time. Jack Warner, a stalwart of English cinema and forever associated with PC Dixon in the BBC’s Dixon of Dock Green,  is wonderful as the dogged policeman on Tommy’s trail, a solid and authoritative performance. Robert Hamer also cast the supporting roles with talented actors, a Michael Powell technique of treating even the smallest roles as important, and Hamer uses several character actors to fine effect. Hermione Baddeley and Sidney Tafler deserve mention as rendering memorable characters, bringing a tacit verisimilitude to the scenes they’re in.

Hamer teamed up with the remarkable cinematographer Douglas Slocombe, a house technician for Ealing Studios who would go on to shoot most of the iconic 1950’s comedies. Slocombe captured both the battered beauty of the suburban milieu as well as the gloomy and moody atmosphere of the dangerous, crime ridden streets at night and the film represents a visual feast at many levels. Slocombe went on to film Hamer’s masterpiece Kind Hearts and Coronets  as well as an astounding array of features, including such award nominated work as The Servant,  The Lion in Winter,  Julia  and Raiders of the Lost Ark.  As of late 2014 the remarkable Slocombe was still going strong at 101 not out!

Robert Hamer, unlike Douglas Slocombe, did not live to a ripe old age, he died young and miserable in an alcoholic haze aged 52 in 1963. Hamer was a closet homosexual in an era where to be so was to be condemned to a life of lies and danger, of shadows and secrets – no wonder he rendered Rose’s dilemma so sympathetically. The grit and grind of It Always Rains on Sunday  (the title alone is a big clue that life is not a bowl of cherries) is a marker towards the kitchen sink realism that became the fashion a decade later, where a collective post war neuroses was purged in a most un-English way, a welter of bleak introspection. Hamer would take his razor sharp incisiveness to the upper classes next with his immortal and justly lauded Kind Hearts and Coronets, but It Always Rains on Sunday  needs to be seen as its equal in every way. 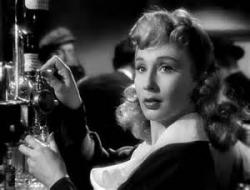 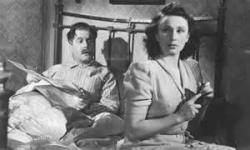 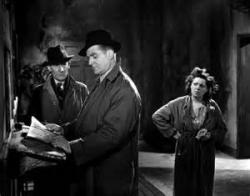 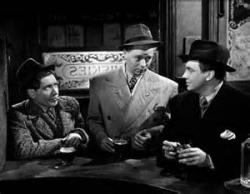 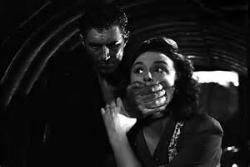 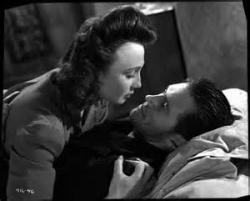 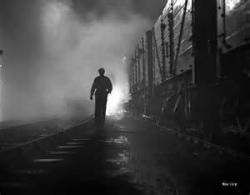