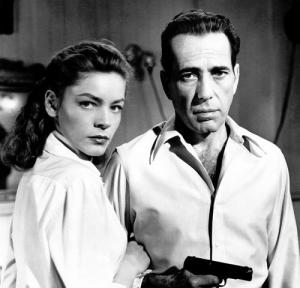 John Huston and Humphrey Bogart’s friendship took a battering just prior to them teaming for this wonderful intersection of film noir and Warner Bros gangster flick. The cause of the angst was the HUAC investigations run by Parnell Thomas and the delegation of Hollywood types, organised by Huston, William Wyler and writer Philip Dunne and their Committee for the First Amendment, who went to Washington to personally protest. Amongst the several stars that went to Washington, Bogart was far and away the biggest, and when he realised that he’d take an unfair proportion of the heat the protest would generate by a press eager to promote the ‘red’ scare and fuel the government’s cold war agenda, he recanted his condemnation of HUAC. Huston was furious with his friend, and both he and fellow committee member Richard Brooks, wrote Key Largo in response to the fascist threat a bully like Parnell Thomas represented, investing all the odious traits they saw in Thomas in the gangster character Rocco, played by noted liberal and Bogart friend Edward G Robinson.

Frank McCloud (Bogart) is a war veteran heading to the Florida Keys to find the father of George Temple, a man with whom he served in Italy and who was killed there. Arriving at the family hotel in Key Largo Frank finds the hotel closed but  with several people in residence. George’s father James Temple (Lionel Barrymore) is delighted to meet Frank and explains he’s privately letting rooms to unexpected guests, but invites Frank to stay on and relate episodes of  George’s service to him and to George’s attractive widow Nora (Lauren Bacall). Frank discovers the other guests are on a fishing trip, but it’s obvious those he meets are not the fishing type. A hurricane is approaching and soon the Temples and Frank are being faced with the true nature and purpose of the guests, they are gangster exiles, returning from Cuba and led by Johnny Rocco, who is dreaming of a return to prohibition era prosperity for him and his cronies.

Rocco decries the fact he has been named as an ‘undesirable alien’ in his own country, ‘like I was a dirty Red or something’, underlining the political sub-text Huston and Brooks were plotting. The gang holds the temples and Frank hostage, and also a deputy who is hunting a couple of native American Indian prison escapees on the loose in the area. Rocco attempts to goad Frank into an heroic action, hoping for a pretext to dispose of him, but Frank declines, even if it makes him appear a coward in Nora’s eyes. The storm hits and in the aftermath it’s revealed that Rocco had denied access to shelter to the local Indian tribes. Rocco meets the local gangsters with whom he is selling counterfeit money, and concludes the deal, but lacks the means to escape and presses frank to skipper a small boat to take them back to Cuba, and to Frank’s death. Rocco’s estranged girlfriend Gaye Dawn (Claire Trevor) a faded showgirl, slips Frank a gun and he battles the gangsters on the boat.

Huston and Brooks adapted the play of the same name by reactionary conservative Maxwell Anderson, it had a short run on Broadway in the late ’30’s with Paul Muni starring. The changes from the play are telling, some to do with the movie convention that the hero doesn’t die and must get the girl, but in the play the war is the Spanish Civil War, which has an entirely different implication than WW2, and Frank was a coward in the war, not a hero. Huston and Brooks also used the Bogart persona, well established by 1948 as that of a cynical and taciturn man, who when called upon will come through. Rick Blaine in Casablanca and Harry Morgan in To Have and Have Not  were a metaphor for American isolationism and when called to action they joined the fight. In Key Largo Huston addresses the kind of world those characters fought for and asks ‘what kind of place do we want’? and rejects a post war return to the gangster-ism of the past, to the autocratic and bullying rule of a narrow minded philosophical clique as found in HUAC and Parnell Thomas.

Bogart is wonderful in the part, effortlessly investing Frank with a decency and purity of purpose that was required to make the transition to action from the ‘I fight no man’s battles’ attitude he espouses. Barrymore is brilliant as the ornery old man who would stand up to the mob if he physically could, and Robinson is measured and balanced as Rocco, which could easily have descended into caricature. The acting honours were stolen by Claire Trevor, who won the Academy Award for her tender showgirl, the song she sings in order to get a drink of whiskey is a stand-out scene. Bacall is fine in a part that doesn’t require much more than window dressing. Huston’s camera is fluid and probing, able to open up the essentially one set piece in ways that enhance the drama, aided by veteran cinematographer Karl Freund (Fritz Lang’s Metropolis and Tod Browning’s Dracula). The staging and set design gives a kind of dream world ambiance as well, giving the morality fable a nice edge of unease rather than a realist or documentary feel.

Bogart and Huston’s friendship survived the falling out over Bogart’s political retreat from the Committee for the First Amendment. Richard Brooks and Lauren Bacall have both commented on how Bogart suffered from his decision to recant, like Sterling Hayden, who eventually ‘named names’ under pressure, he never forgave himself for doing so. Bogart gave in to the extreme combined pressure of the Hearst Press, Warner Brothers and financial interests trying to keep his production company venture with Producer Mark Hellinger afloat, at a dinner with Huston and Robinson when the subject of the committee came up, Robinson said in regard to Roosevelt ‘The great chief died and everybody’s guts died with him’. Close friend Brooks simply said ‘Bogie was never the same again’. 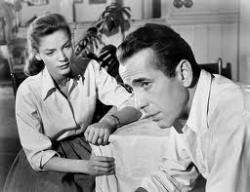 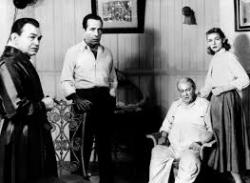 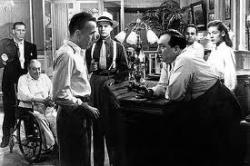 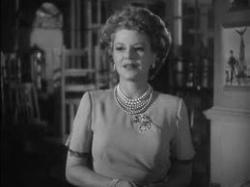 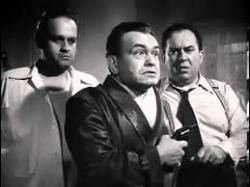