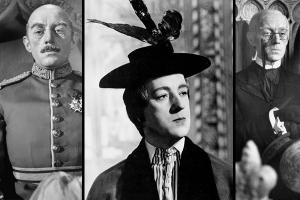 Ealing misfit Robert Hamer’s ‘Kind Hearts and Coronets’ is the ultimate black-as-pitch comedy of manners, full of keenly observed sketches of aristocratic foibles and dialogue worthy of Oscar Wilde himself. The source material was an Edwardian novel by a Wilde acolyte Roy Horniman, ‘Israel Rank’, but the Jewishness of the central character was removed and replaced by an Italian ethnicity by Hamer and co-scenarist John Dighton deeming the public not ready for that particular connotation post WW2. Hamer had difficulty getting Michael Balcon to fully support the project but as Ealing had many productions running concurrently he not only slipped under the radar but was sent off to the larger Rank studios        (Balcon had recently entered into a deal with them) to do the bulk of the filming, Ealing being fully booked in 1948. In fact TEB Clarke recalled the novel being originally picked up out of a second hand market stall by Ealing house writer Michael Pertwee only because of the connection in the Rank naming coincidence, from such little slices of luck cinema immortality can be achieved. Hamer as a writer-director was unusual at Ealing as mostly the team of writers and the stock directors were seperate and distinct groups, and Hamer has more claim than any to the lofty appellation ‘auteur’.

The film opens with a state executioner arriving for his next morning’s work, the hanging of the Duke of Chalfont, a job he considers to be the pinnacle of his career ‘once you’ve had the silk rope you don’t go back to hemp’ he dryly opines to the Warden, also worrying as to the correct form of address when meeting the Duke?. Hamer kicks off one of the themes here, the concern with proper etiquette is somehow more important than the gravity of the situation about to be enacted. The Duke, Louis Mazzini (Dennis Price) is in the middle of writng his ‘memoirs’ as a means of informing the audience how we got here. Louis’ beloved mother was an estranged member of the aristocratic D’Ascoyne family, disowned by marrying beneath her position to an Italian in a love match. Several overtures for reconciliation are rebuffed and his mother eventually dies hoping to be interred in the family vault, but when this request is rejected too, Louis resolves to kill off all the D’Ascoynes in an act of revenge. By a quirk in the title, that it can pass through the feminine line it also means that Louis will inherit the title if he can successfully carry out all the necessary murders.

Louis takes a menial job to keep himself, relying on the good graces of childhood family friends and falling in love with Sybilla (Joan Greenwood) in the process. After being promoted into ladies underwear Loius proposes to Sybilla, only to be informed she’s agreed to marry another childhood friend, Lionel. Louis dangles his potential Dukedom on front of Sybilla, unwittingly sowing the seeds of his own downfall in doing so. Now spurred into action he plots to take down his victims, but needs to get closer to them ’it’s difficult to make a neat job of killing people when one is not on friendly terms’ he comments in the droll voiceover Hamer employs to great effect. The first murder happens with apparent ease, after waiting 2 days for cousin Ascoyne (Alec Guiness) to surface from his hotel room during a weekend long tryst with his mistress he ensures the couple sail over a weir, regretting vaguely the girl being collateral damage but consoling himself with the thought that ’she’d already undergone a fate worse than death’. Studiously he finagles his way into Ascoyne’s fathers affections, fake sympathy at the passing of the son his entree to the private bank he owns. Now working from inside the family he ratchets up the action, finding photographer and tippler Henry he dispatches him while taking tea with his abstemious wife Edith (Valerie Hobson), a ‘beautiful prig’ in Louis’ estimation but a woman he will eventually fall in love with, or an aristocratic approximation of that emotion at least.

At Henry’s funeral all the remaining D’Ascoyne’s are arranged like sitting ducks for Louis to peruse, including the boorish Bishop conducting the service, Loius observing the family has followed the tradition of the landed gentry by ‘putting the fool of the family into the clergy’. In the meantime Sybilla has married Lionel and when Louis inquires if she enjoyed the continental honeymoon her reply, ‘not al all’, is very un-Ealing in the erotic charge it engenders. Her complaint that visiting Italian galleries was an attempt to improve Lionel’s mind is met with a delicious ‘he has room to do so’ from Louis. The series of inventive murders progresses well and soon Louis is the heir apparent, Sybilla now focused on the main prize herself and conducting an illicit affair with him all during this time, Louis giving her a very direct assessment of her faults and charms at one point, also very un-Ealing. Lionel asks to see Louis on a matter of ‘some delicacy’, and it seems some of the web is about to unravel, but Lionel is simply bankrupt and threatens suicide unless Louis agrees to help him. Louis rejects him and they scuffle, Lionel producing a knife, Louis strikes him down and leaves. Edith surprisingly agrees to marry Louis and they take the news to the current Duke, the weekend opportuntiy enough for Louis to remove the final obstacle and assume the title. Scotland Yard come knocking accusing Louis of one murder he didn’t commit, that of Lionel’s. Louis elects to face trial by his peers (in this case literally) in the House Of Lords, who in the absence of a suicide note find him guilty and sentence him to death. Sybilla visits Louis in prison the night beofre the hanging with the deal that she produces the suicide note that she does indeed have and Louis bumps off Edith. Deal done, Louis walks out to make his choice between the women only to remember he’s left his ‘memoirs’ detailing all of his actual murders inside the prison.

Mention needs to be made of Dennis Price’s splendid performance, while Alec Guiness got all the justified accolades for his scene stealing array of 8 different D’Ascoyne characters (the Bishop especially good) Price is the heart and soul of the film, his Louis is superb at every level and the fulcrum on which the entire project pivots. The razor sharp writing elevates this comedy to the highest of places in cinematic satire, Hamer unloading on the absurdities of the aristocracy at one end and upon the fawning nature of the ‘lower’ classes at the other that allows such unearned privilige to survive. In this social milieu the trapping of wealth and title are enough to confer on individuals competence by default regardless of any evidence to the contrary, the antithesis of democracy and egalitarianism. Louis may be a murderer but at least he’s good at his work! he ascends to take ownership of a castle which is as he puts it ‘a building lavishly equipped with instruments of violent death’. Such are the tools of the aristocracy, the old Duke having a poacher thrashed in disregard for the law. Also one assumes the House Of Lord’s found Loius guilty mostly because he’s ‘not one of us’. No greater sin against geneaology could have been committed than to have weakened the bloodline by compromising it with a common Italian variant. The falsity of ‘behaving like a gentleman’ when living a superficial life of priviliged indulgence, that good form and breeding matters above all else, these are the sacred cultural cows Hamer roasts. He himself fell victim when as a student at an elite school he was ‘sent down’ for having an affair with a man. The works of Wilde must have had a special resonance for him and it’s those harmonic intervals and grace notes that adorn this symphony to language. Balcon came to say this was his favourite Ealing film, ironically so atypical of the studio it would not be recognisable as an Ealing production, but no matter, it’s a small miracle of a film that we can all be thankful for. 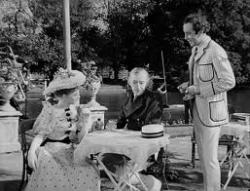 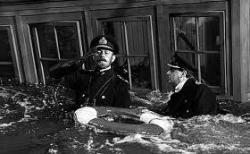 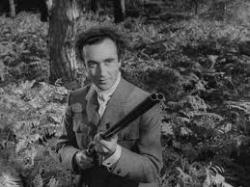 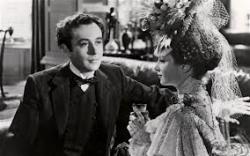 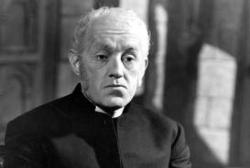 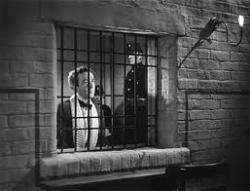