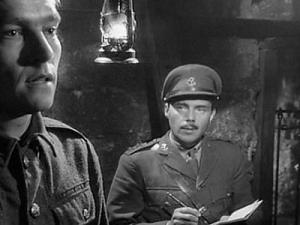 To end all wars?

Joseph Losey, an expatriate American left-ist, blacklisted during the McCarthy era found a ready home in England where he was able to rebuild his career, eventually rising to the very top of the1960’s ‘serious’ cinema director’s pantheon. At first he may seem an odd fit to a tale where the horrors of the Western Front between 1914 and 1918, together with the nuances of the British class system are examined through the microcosm of a court-martial, but puffed-up officialdom and a kangaroo court anywhere have much the same hue. Private Hamp (Tom Courtenay) is to be tried for desertion, and the defence raised for him by Captain Hargreaves (Dirk Bogarde) teases out issues of competence and procedure, accompanied by the distant thud of exploding shells in the muddy fields of France in 1917.

The success of Lord Kitchener’s ‘Your Country needs You’ recruitment campaign three years earlier saw over 1 million British men volunteer to join the BEF to fight in France. Many of the men, perhaps naively, believed the widespread view that the war would be over by Christmas and that it would be a kind of ’boy’s own’ adventure to do their duty and fight ‘for King and country’. Unfortunately with general’s in charge wedded to old fashioned notions of ’ superior character’ and dreaming of great cavalry break-throughs in an era where developments in technology meant slaughter was able to be carried out on an industrial scale it meant foot soldiers were merely cannon fodder, the Tommies known as ‘lions led by donkey’s’ in the eyes of their enemies. The conflict soon bogged down to the stalemate of trench warfare where gains of several hundred yards were paid for with the blood of tens of thousands of soldiers. Superior character meant little when charging across open ground into machine guns that could fire 600 rounds per minute.

Losey opens the film with shots of present day war memorials, soldier’s carved in stone and venerated for eternity for paying the ‘ultimate sacrifice’ in doing their duty. Silently the camera examines in close up the tomb of the unknown soldier, forcing us to reflect on a part of the official legacy of a war that inflicted unimaginable losses on the countries involved. Losey uses a haunting hamonica only score by virtuoso musician Larry Adler very effectively, and when we meet Hamp in his makeshift cell he’s gently playing a harmonica. Hargreaves enters, insisting on formal protocols when Hamp fails to stand and salute him, to interview him for his defence in the coming court martial. He hears Hamp relate how after 3 years of being on the front lines, and with all of his original unit being killed except him, he simply started walking away from the guns after one battle, eventually found wandering by military police and brought back and charged with desertion. After initially believing he’d be simply going through the motions of defence for the sake of proper process, Hargreaves comes to see another dimension to Hamp’s plight, and believes he should seek a not guilty verdict  on his behalf.

The court is convened in ramshackle surrounds, nothing like the majesty of the buildings in Kubrick’s ‘Paths of Glory’, and Hargreaves mounts a defense upon the belief that Hamp is shell shocked and not responsible for his pathetic, unorganised attempt to simply ‘walk away’. Captain O’Sullivan (Leo McKern) is called, he is the Doctor who’d examined Hamp most recently and he maintains he saw no sign of ‘nerves’, a euphemism for shell shock. Hargreaves relates Hamp’s experiences, his anguish at nearly drowning after being pulled into the mud by a dying soldier, his new uniform necessitated by the fact that his comrades had been blown apart and the ‘red mist’ had settled across Hamp, the sole survivor in their part of the battle of the Somme. O’Sullivan takes a common view both of the period and of the officer class, that ‘nerves’ were a cover for a malingerer’s cowardice, and his prescription for Hamp was a dose of laxatives, ‘a good clean out always helps’. Hamp testifies with ‘ebarrassing honesty’, he is guileless and even though he knows the charge is serious he’s convinced they won’t shoot him given the facts and his record of 3 years service after volunteering. Hargreaves pleads that this ‘hopeless, desperately stupid act’ of walking away from the guns could only have been done by a soldier who’d taken too much, as Hamp said ‘it was worse than anything’. Another officer Lieutenant Webb (Barry Foster) who likes Hamp testifies for him, but could only really sum up his efforts with ‘he brewed a damn good cup of tea’. At one point after the trial Hargreaves engages the prosecuting lawyer in a conversation, only to be told that his plea for justice was a ‘bit amateur’. The court finds Hamp guilty, but recommends mercy, HQ sends back a note that they are not interested in mental health, and as their battalion is going into the line Hamp’s execution will ‘increase morale’, no mercy is granted.

Counterpoint to the officers arguing points of law and form Losey shows the working class soldiers, out in the mud and coping with the rain and the rats. At one point they lure a large rat out of the belly of a dead horse and put it on trial, before beating it to death. They are scathing of the officers who lead them and on the night before Hamp’s execution they join Hamp, plying him with alcholol and they all proceed to get rolling drunk. Their revelry is interupted by a Chaplain who talks to Hamp of his ‘sins’, administering communion, only to have Hamp regurgitate the ‘blood’ of the saviour. Hamp is at one point blindfolded in a macabre game of blind man’s bluff, later Webb gives him a sedative, and in the morning he’s led out to meet his fate. The execution is almost perfunctory, no sentiment of moving farewell’s. The firing squad, as was common, mostly avoid the target, the doctor pronounces him still alive and Webb, who’s job it was to administer the coup de grace in this case hesitates. Hargreaves takes his gun and kneels down to Hamp, raises his head sympathetically and says ’Isn’t it finished yet’? ‘No sir, I’m sorry’ replies Hamp, he puts a revolver in his mouth and pulls the trigger.

The lasting effect this film has is because it rises above the theatricality of it’s material, the poignancy and futiliy of that war perfectly underscored by all the elements involved, the perfomances not least. Bogarde rises to the gravitas needed for the slight awakening his upper class officer undergoes, and Courtenay beautifully captures the bewilderment of the little soldier with resort to sentiment. Losey opens out the context with clever use of war photographs cutting through the narrative. The look and feel of the film, the claustrophobic camera angles and gritty art direction gives an air of brutal reality, and the staging of the final execution puts the viewer in the same position as Hamp’s battalion who had to watch it. Losey understands that the battles within the battles were sometimes fought between the classes, thrown together in war in ways they would never be in civilian life. Hargreaves’ preconceptions about his working class client are broken down by Hamp’s innate humanity and it’s this Hargreaves sees that the procedural blindness of his class is destroying, ‘If justice is not done for one man, then other men are dying in vain’. Losey constructed with ‘King and Country’ a timeless and compelling reminder of the failure war represents at every level. The grand illuson of WWI is that it was the ‘war to end all wars’, and this film, visceral and haunting belongs in the front rank of those that looked into it’s hollow eyes.

Interestingly in 2006 the British Government granted conditional pardons to the nearly 300 Tommies exectuted for desertion in WW1, acknowledgement that most were probably cases of the then little researched and understood condition of shell shock 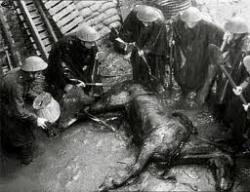 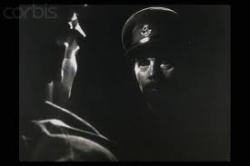 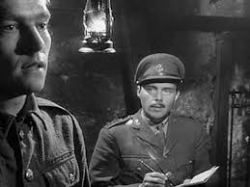 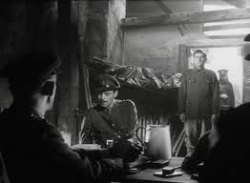 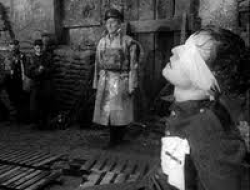 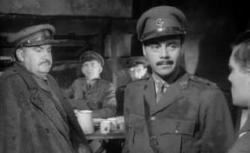 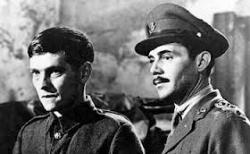