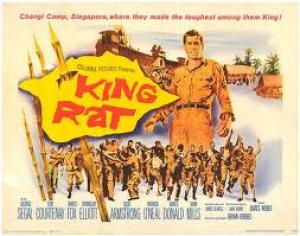 You are what you eat

Bryan Forbes is not a director who gets a lot of notice these days, and that's a pity, for if evidence is needed of his particular ability then look no further than his remarkable adaptation of the James Clavell WWII novel King Rat.  Clavell was a prisoner of war in the Japanese occupied Malayan hell hole of Changi and wrote with great authenticity about the experience, Forbes managed to transfer it intact via his own screenplay without artifice or sentiment and with startling visual sophistication. Burnett Guffey, the veteran cinematographer who had won an Academy Award on From Here to Eternity  helmed the superb black and white shoot, which was Oscar nominated, as was the excellent art direction by Frank Tuttle. It was Forbes' first American movie, and after Steve McQueen and Paul Newman turned down the lead  George Segal was cast as the cunning American, playing against a raft of wonderful British character actors, including Tom Courtenay, James Fox, John Mills and Denholm Elliot.

Forbes begins stylistically as if he's delivering an 'art' film, the composition of angular frames, the delicate moods and tones and meditative feel all indicate a different prisoner of war film is on hand. He introduces the main character King (George Segal) as a neat and well presented soldier, his combed hair, smooth demeanour and leisurely gait contrasting completely against the rags and working grind of the other prisoners. King is confronted by Grey (Tom Courtenay), a Brit Provost marshal, who has it in for the fast talking American, "I've never seen a run of luck yet that doesn't run out".  It's soon clear that King runs the black market in the camp and has purchased protection from higher up, as he's been able to purchase everything else via his rat cunning. King spots Peter Marlowe (James Fox) conversing in Malay and offers him some work translating on some deals, sealing the deal over the exotic delicacy of a fried egg. Peter is an upper class dilettante and strikes up a relationship with the Yank for several reasons, but none of them to do with the money he's paid. King can't understand this, and when Peter gets sick King goes out of his way to protect his asset, which Peter insists is an act of friendship. Peter can't believe that King doesn't find a deeper connection than the money, "friendship isn't ten percent",  he tells King. The two men also bond through the perverse pleasure they get in putting it over the officious Grey. Inevitably the war ends and circumstances change.

King's scheming leads him to the centrepiece of the film when the lack of meat in the camp diet gives him the idea to breed rats and serve it to the officer's, "Major's and up"  as mouse deer, a local Malay delicacy. It tickles the nascent contrarian in Peter, and he goes along with the plan. A series of well observed vignette's shows the grinding repetition and boredom of camp life, relieved for some by small moments of grace. Two of the men have formed deep attachments with animals, one with his chickens who provide the prized eggs, and one with a small dog. When the dog kills a hen Grey orders it's destruction, it's a wrenching moment for most, but for King an opportunity. Clavell contrasts the lower ranks willingness to pass off meat to the officer's with a feast laid on for King's intimates that sees them eating meat of indeterminate origin. When it's revealed that the feast is not what they assumed, "You said pig, I said nothing",  King retorts, "It was Hawkins' dog, now it's just meat".  It's Clavell's way of saying that what was taboo on the outside is fair game on the inside, different rules apply. The camp medical officer is in an obvious homosexual relationship with one of the orderlies, regardless of whether such arrangements would exist in his 'normal' life. Rationalisations abound, "You nail the feet of Geese to the floor to get liver pate"? spits King at the upper class snobbery Peter exhibits. King prepares the meat in a ritual that borders on the sacred, and in many ways it is, and the reality of the delicious meal soon overcomes any civilised niceties or 'hair splitting' over what the meat is.

Forbes delivers a prisoner of war film with very little presence or interaction from the guards. The Japanese here leave the men to their own devices, probably an indicator of how stretched they were and how near to the end the war was? Ultimately they only interact over black market business with King, and at the end when the war is declared over. The film mentions in a pre title card that they were surrounded by impenetrable jungle outside, nobody was going anywhere, and this leaves the men at the mercy of the law of the jungle inside. King's American street smarts makes him ideally placed to take advantage in this environment, where for people like Peter the system is set to his advantage back home in the not-so-mean streets of the upper class British Establishment. King incredulously asks the naive Peter at on point of his time in the camp , "How did you ever survive"?  The wheel however turns full circle and King knows his days as King Rat are over. We learn at the end that Max, one of King's sycophants, actually outranks him and tries to reassert the military order of things, only to have King's skewered re-ordering survive a little longer. When one of the soldiers agonises about releasing the rats 'born in captivity' into the wild, King spits, "open their cages, they'll soon learn".  Grey, in an aside gloating about how things will be different tells Peter, "It's our turn now",  referring to the working class and upper class divide back home, and his hoped for ascension of the proletariat.

King Rat  is a wonderful examination of an hermetic world, Forbes' films are full of style, abound with literate and interesting situations and characters you care about. The performances are all top shelf, a reminder that Forbes started his career as an actor before moving into writing and then direction, and the array of wonderful British actors strengthens an already solid project, but a special delight is seeing the nuanced gurning of Leonard Rossiter in amongst them, a superb and under used screen actor. Segal however dominates in a beautifully realised and rounded portrait as the scrounging and relentless King, American chutzpah against British sangfroid is a no contest, this is no game of cricket. The film is also an antidote for the 'stiff upper lip' brigade of Brit POW films that had graced UK screens in a steady stream since the '50's, and an indication that '60's audiences liked their meals served spiced with a little cynicism.

Bryan Forbes made some delightful British classics in the early '60's like Whistle Down The Wind  and Séance on a Wet Afternoon,  and later decamped to Hollywood, on and off, to try his luck there with mixed results. 'King Rat' is a great entry in a very respectable body of work from a director who deserves to be lauded just a little more. Jolly good show. 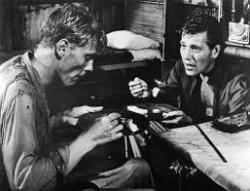