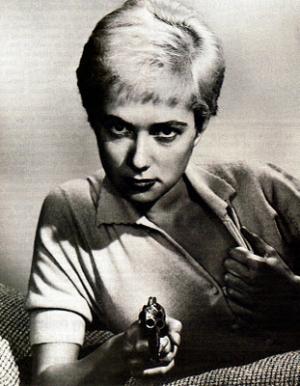 Robert Aldrich’s adrenaline charged noir updates Pandora’s Box for a cold war generation no less, and delivers a cynical kick in the nuts to an anesthetised, Eisenhower consumerist culture, where the thing that is in the box is an explosive mirror help up to mendacity and greed. Aldrich served a long apprenticeship as an assistant director, and his work on Losey’s The Prowler and Polonsky’s Force of Evil served him well in coping with the bleak theme’s and tones of Micky Spillane’s vanity-noir Kiss Me Deadly, freely adapted by leftist writer A I Bezzerides, who’d scored a success a few years earlier with Dassin’s Thieves Highway. Aldrich’s liberal humanism was the ideal prism with which to interpret Spillane’s trashy characters, giving them a fatalistic detachment that placed their mostly vacuous actions into a wider context and contrasting them against the epoch destroying potentialities of the nuclear age.

In a clue that we are entering a world where the priorities are upside down, Aldrich runs the opening credits in the wrong direction, it both forewarns and disarms the viewer. Mike Hammer (Ralph Meeker) may be the most unlikable lead in any mainstream movie, cruising through Los Angeles like a vain and self-centred rat with a gold tooth. We meet Mike picking up a distressed damsel on a highway, a memorable turn from Cloris Leechman in her film debut, and right away things seem askew. ‘If we don’t make the bus stop, remember me’ says the mysterious woman, and soon she’s dead and Meeker is left to piece the puzzle together. The usual devices of being warned off by the authorities, of finding people who are not what they present as being, all add up to making Hammer more determined than ever to find ‘the great what’sit’. Hammer uses everyone and everything in equal measure, even his devoted and morally questionable ‘secretary’, who he’s happy to pimp to key villains or connections that might shed some light on the mystery. The impression is that she’s been around him so long she’s become as amoral as he is. Mike may not be the brightest guy in the world, but his dogged persistence finally pays off in ways he could not have imagined, and leaves him and Velda fighting for survival in the memorable final shot.

The ‘great what’sit’ may be the ultimate Hitchcockian ‘Macguffin’, and Hammer is not pursuing it for any higher purpose, or to clear himself from an unfair charge, merely to have something valuable. During his investigations he tramples over symbols of culture and refinement, opera and poetry and science are treated with contempt in his world, and he’s unable to disguise the perverse pleasure he gets in the violence he commits on others as he stumbles his way ineptly from one clue to another. Unlike Bogart’s Marlowe, who is quietly one step ahead of everyone, this P I ‘bedroom dick’ is noisily one step behind. Aldrich provides a lighter touch with Hammer’s manic mechanic friend, Nick, who is subtly made to embody the death motif that underpins the narrative, being called ‘Lazarus’ at one point, and dodging his own personal ‘Hiroshima’ at another, only to be crushed by the status symbol of 1950’s US consumerist culture that he covets himself so badly, the car. Velma says as she nuzzles Hammer’s ear, trying to take his fixated mind off the dead girl ’I’m not dead’, and indeed the key to the whole mystery is found as an actual key in the dead woman’s stomach by the corrupt coroner.

It’s a bleak and corrupt world that Aldrich essays in Kiss Me Deadly, and the conclusion is fittingly appropriate, as the girl with as few scruples as Hammer embraces him and requests ‘kiss me’. Hammer doesn’t really understand the implications of what he’s inadvertently uncovered, and ends up stumbling out into the surf no more enlightened than when he started. Aldrich is saying that humans as inept and venal as Hammer can’t be entrusted with the safe custody of the planet when they play with substances that compromise it’s very existence, can’t be given Pandora’s Box and then be told, ’don’t open it’. Hammer is an existentialist man too dumb to know he’s in an existentialist crisis, a representative of all humanity in a cold war cosmic game  where we can never cheat death, no matter how we try. If curiosity killed the cat, then the ‘great what’sit’ obliterated the entire feline species. Kiss Me Deadly may well be a ‘riddle without an answer’, or it may be saying ‘Death wins every time, you might as well choose a good one’. 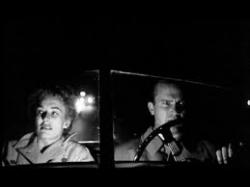 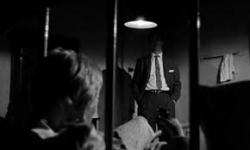 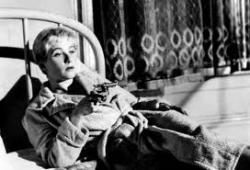 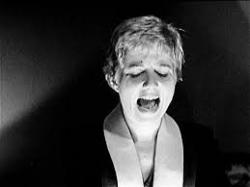