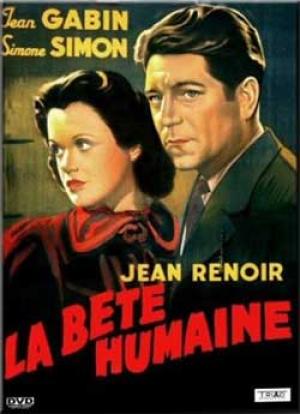 'La Bête Humaine' is a film about blood, poisoned blood to be precise. Jean Gabin plays a working stiff train driver, in love with his train, seemingly in place of an alternative and more complex relationship with a woman?! The train is reliable and mechanical and if it breaks down it is able to be fixed, yet the human machine is not so obliging. Simone Simon is the third part of the puzzle, a noir-ish femme fatale and a delicate enchantress, the train had no chance. Renoir called it a triangle when recalling the film in his introduction filmed in 1967, so we’ll take him at his word.

Renoir wrote the script, based on Emile Zola's novel but only focused on a small part of the story and diluted some of the leftist politics to the chagrin of some of his admirers. France, in 1938, surrounded by Fascist stood exposed in Europe, particularly after the short-lived Popular Front of 1936 that saw a broad coalition of the left take government, and the arts community expected Renoir to continue the good fight. Among the state backed art projects the poetry of Marcel Carné collaborator Jaques Prevert is notable as is the Renoir directed and Prevert scripted film, 'The Crime of M Lange'. Renoir apparently levelled the charge of fascism against 'Port Of Shadows', written by Prevert, adding to the layers of political complexity of French liberals in a post Russian revolution Europe. Jean wrote a weekly column for a communist newspaper, warning his compatriots to wake up to the threat of imminent war, but the Popular Front government disintegrated soon after. Against this backdrop, it's no wonder Jean sought relief in the melodramatic and poetic elements of the story, but he would return to politics with a vengeance in his next film, the mighty 'La Règle du Jeu'.

The mood of 'La Bête Humaine' is downbeat and the style suggests film noir long before the term became popular coin. The cinematography by Curt Courant is superb, redefining what was achievable outdoors, with cameras mounted all over the train engine, nearly killing Renoirs nephew Claude, a cameraman, in the process. Courant shot Hitchcock's original 'The Man Who Knew Too Much' and would helm Carné's wonderful 'Le Jour se lève' in 1939. The shots at night in the train holding yards are pure noir, a visual bridge that links the German expressionists and Von Sternberg's variations to the later Hollywood style.

Lantier curses the blood of his ancestors, the stuff that has left him with dark moods, depression and fits of compulsive homicidal behaviour. Incredibly, Gabin manages to make his character sympathetic, and we feel for his struggle. His sense of dread at revealing his true nature to another human, only to want to strangle the life out of them, hangs like a sombre pall over the proceedings. The first exposure we have to this violent mood swing is shocking in it’s suddeness, but then right from the opening scene Renoir takes us along at a rattling pace, mostly 60 mph at the front of a train. Lantier is drawn into a relationship Severine, the wife of a stationmaster he knows, covering up for them both in a murder investigation. He takes the opportunity to get close to her and soon falls in love. Just as he is aware of his limitations in regard to l’amour, she has no illusions about her ability to feel love given the way men have abused her in the past.

Renoir encourages us to think that the past can be overcome, with moments of happiness emerging as both Severine and Lantier lose themselves in each other, grasping on to the possibility of redemption and change. But what ‘new’ selves will they find? Roubard the stationmaster needs to be disposed of for the lovers to have a chance. Severine cajoles Lantier to do the dirty work, dirtier than the grimy day-to-day grind he shares with his stoker played beautifully by Carette, a Renoir regular. Just as the patriarchal culture has destroyed her chance at happiness, Severine exacts a bloody revenge on the men she bewitches, as seemingly Lantier agrees to her deadly scheme.

The philosophy of the poetic realist films is straightforward and unsentimental, and 'La Bête Humaine' is no exception. Most of the characters are carried along by fate, aware of it yet unable to challenge it’s inevitability or to change the course and outcome. Therein lies the tragedy, momentary bouts of struggling against destiny are overtaken by the sombre realisation of it’s futility. The fatalism that infuses the film speaks to Jean's political side, as he fully expected France was heading towards another war, and rather than address that overtly he allows the prevailing atmosphere to provide an oblique commentary. Renoir here is saying, ‘try as ye may, blood will out’, and soon after in his stunning 'La Règle du Jeu' he turns his focus to a different and bluer kind of blood.

'La Bête Humaine' is a landmark film in so many ways, undeniable and essential, full of starling imagery and superb performances from an artist in top form. One of the very best. 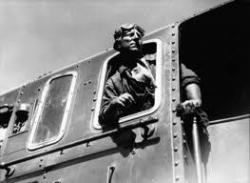 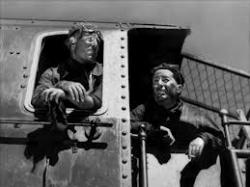 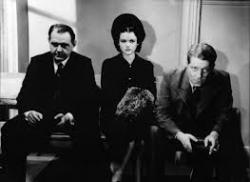 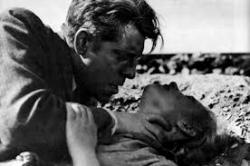