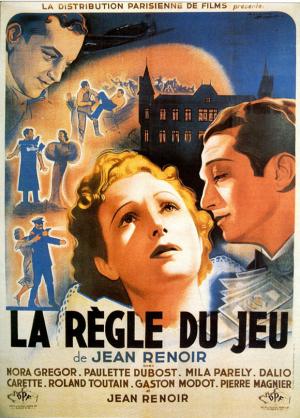 Everyone has their reasons?

'To the question, ‘Is the cinema an art?’ my answer is, ‘what does it matter?’... You can make films or you can cultivate a garden. Both have as much claim to being called an art as a poem by Verlaine or a painting by Delacroix… Art is ‘making.’ The art of poetry is the art of making poetry. The art of love is the art of making love... My father never talked to me about art. He could not bear the word.' ~ Jean Renoir

The Rules Of The Game was the French film that for me unlocked the door to the philosophical way the French see things. After being force fed the artificiality of Carne’s Les Enfants Du Paradis, and being underwhelmed with Breathless, both of which I was too young to appreciate (but eventually did), it was easy to succumb to the humanist charm of a Renoir fable. The fatalistic element of pre-war French cinema which came to be the dominant tone of Poetic Realism reached its apogee in this film, where the characters act out a seemingly predetermined path, accepting the twists with a metaphorical Gallic shrug. The existentialism of Sartre and Camus is also part of the fabric of philosophical depth here, the characters needing to find meaning in a complex and bewildering world where "everyone has their reasons". Men and women struggle for a level of self-awareness that will elevate their actions, aware that love yearned for is always superior to love experienced.

A beautiful pre-World War One song called Let The Great Big World Keep Turning has the exquisite line ‘Love they say must come to one and all, of high and low degree’, this could have been Renoir's jumping off point for The Rules Of The Game. The story unfolds as a series of interrelated affairs impact on the weekend activities of the upper class at play. Renoir seems to be saying this is what all humans do, but pretend not to, so are we not all hypocrites? Indeed it scandalised the French, the mirror held up to them was a little too revealing perhaps and Jean was virtually persona non grata overnight. He was bemused by the reaction as he himself said, he’d grown up amongst artists and bohemians and had always been taught to see the world as ‘one big knocking shop’! It seemed Renoir bumped up against the limit of French tolerance in 1939. Of course they had other things on their minds.

It is the quintessential ensemble piece, no one player dominating, but a couple of notable scene stealing turns from Julien Carette (a Renoir  favourite in his 4th appearance in a row for Jean) and Paulette Dubost as a flirtatious servant and a quiet aristocratic centre from Marcel Dalio are standouts. The filming of the hunt is brutal by modern standards, and it’s odd after years of viewing post Rambo Hollywood violence-porn that seeing some rabbits actually get shot could be so confronting, but as with the dialogue we are not spared the harsh realities that convention would have had Renoir water down.

In the Renoir canon, this surely belongs in his top 2 or 3. It would be hard to imagine a more insightful, heartfelt film. Renoir might have been saying everyone has their reasons, but he was not judging, he was not putting himself outside all of us, merely pointing out that human longings are a common thread that can easily lead to transcendence or tragedy, and that the dividing line can be a very slender one. The Rules of the Game is part farce, part drama, part romantic triangle, but all the parts are working sympathetically to create a masterful, coherent whole. Renoir is saying that the things that unite us are greater than the things that divide us. It’s for the politicians to appeal to our base prejudices, to exploit our insecurities, here the artist lays them out for us to view and consider during an era where politicians would march the whole world into conflict once more.

Renoir was coming off one his greatest hits with La Bête Humaine and the earlier La Grande Illusion had brought him world acclaim, and this film was to be the most expensive ever produced in France, When asked what the film would be, Renoir said "A precise description of the bourgeoisie of our time". In retrospect, Renoir reflected on it's utter commercial failure, "People go to the cinema in the hope of forgetting their problems, and it was precisely their own worries I plunged them into... I showed them a society in the process of disintegration, so that they were defeated at the outset... the truth is that they recognised themselves. People who commit suicide don't care to do it in front of witnesses". Renoir fled the Nazi's and soon arrived in Hollywood, for an uneven and under-appreciated period of fractured productivity.

Both John Ford and Francois Truffaut called him the greatest director. He is not only a great starting point for understanding French cinema, he’s the point you’ll probably arrive back at after you’ve unravelled the mysteries of Godard, Bresson, Melville, et al. If Carné and Duvivier came to be restricted by being solely thought of as ‘Poetic Realists’ Renoir’s legacy transcends any such summation, even if he provided some of the genre’s most enduring masterpieces in La Bête Humaine and The Lower Depths. Renoir's deep humanity illuminates all his work, so if this is his greatest film, it will stand as long as we behave like humans, with all our follies, foibles and affairs of the heart. Art? probably. Regardless, c’est magnifique! 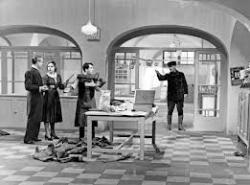 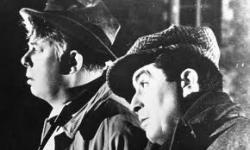