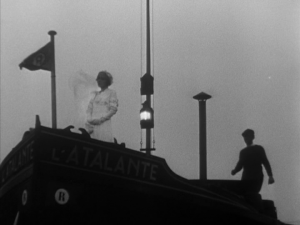 Love, unbound by time and place

"Life is a rainbow of chaos"
~ Paul Cézanne

Hollywood primarily, but most global cinema has traduced, commodified and cheapened the notion of romantic love for most of the medium’s existence, but if proof is needed that cinema can also create a sublime and transcendent statement on the same subject then here it is in ’L’Atalante’ . Jean Vigo battled ill-health and an unsympathetic studio to magically assemble one of the most poetic and beautiful films of all time, that he achieved it under such conditions is a miracle, that he didn’t live to see it find it’s place in the cinematic firmament is a tragedy. Like others of his era, building on Clair and Fedyer, Vigo found poetry in the banal and ordinary, and also a subtle undercurrent of surrealism, then much in vogue in Paris. Indeed Jean Gremillion’s dictum of rejecting “mechanical naturalism” and instead focusing on “the discovery of that subtlety which the human eye does not perceive directly but which must be shown by establishing the harmonies, the unknown relations, between objects and beings; it is a vivifying, inexhaustible source of images that strike our imaginations and enchant our hearts.” could serve as the paradigm for the entire genre of Poetic Realism, which could happily date it’s beginning with ’L’Atalante’.

Vigo commences with a wedding, as Jean (Jean Dasté) and Juliette (Dita Parlo) exit the church they march towards the titular barge that will carry them away to a life on France’s working canals, followed by her family. Vigo gives us no background but it’s soon obvious she’s from a small village, dreaming of paris and he represents escape for her to the romance of the canals. Jean, however, is a pragmatist, the canals are for working not escape, and even though he’s fallen deeply in love with the luminous Juliette he intends to continue the hard working life he’s always known, Parisian lights or no. The set up is completed by the marvellous Michel Simon as Jules, the first mate of the L’Atalante, he is a force of nature, a paradoxical brute who can wear a dress, a bear who wrestles with himself but yearns for tender music. Jules and Juliette dance around each other, metaphorically and literally, unsure if either is friend or foe, only to find they are indeed kindred spirits. Jules has lived a full and interesting life, and Juliette realises he is not a man who will die wondering, a condition she earnestly wishes upon herself.

After the first flush of married life starts to wear off, and the playful eroticism of the couple recedes, Juliette sees the monotony and routine of the working barge begin to overwhelm her. Jean is distracted and unaware of the depth of feeling of his new wife, and in the same way Renoir called ‘La Bete Humaine’ a love triangle with the train as the third party, here the barge fulfills that function too. Juliette attempts to reach Jean by telling him of the fable that ‘under water one can see their true love’, Jean plays along and puts his head in the river but doesn’t fully comprehend the concept. As Jean is consumed by his work Juliette continues to identify with the anarchic spirit she sees in Jules, and once jean registers this connection he becomes jealous, aggressive and sullen. In an attempt to win back his love Jean takes Juliette to a dance club on the outskirts of Paris, only to become jealous again once Juliette is flirting with a peddler who dances with her and fuels her dream of Paris. The peddler promises to take her to Paris, but after arriving at the barge Jean drives him away. Juliette decides to take some time for herself and see Paris on her own, while they are docked on the Sienne.

Juliette walks the Parisian boulevards alone, entranced by the beautiful things on offer, and happy gazing into the store windows. She returns to the river only to find an empty dock, Jean has weighed anchor and left without her in a fit of pique. She stumbles around the streets in a daze, seeing another side to Paris, a not so attractive one. Jean, realising the foolishness of what he’s done, spirals into a depression. He dives into the water at one point, seeing the vision of Juliette in accordance with the fable, and yearning to re-connect with his true love. As both of the lovers take to their separate beds Vigo employs one of the most famous sequences in all of cinema as the two mystically feel the absence of each others bodies and then conjure a visceral presence by strength of their love alone. Jean is in danger of losing his contract by his careless behaviour and Jules sees that he needs to act, to find Juliette and return her to the barge. Using the mystical power of music, Juliette plays the Chant of the Mariner in a record shop, only to have it produce Jules in the flesh to take her home.

Any summary of the plot will fail to do justice to what is achieved by Vigo. The remarkable visual world Vigo constructs, with the aid of Russian cinematographer Boris Kaufman (Oscar winner 20 years later for ‘On The Waterfront’) is a dreamscape of water and desire. The shots of Juliette walking the length of the moving barge in her bridal dress are pure poetry, unforgettable and moving. Water is everywhere, life giving and threatening at the same time, a metaphor for love in it’s capacity to consume, obfuscate and devour. The surreal playfulness of Jules’ sight gag with a record and his finger, or with the grotesque home drawn tattoo’s gives the film a humour and humanity that fills in the realism part of the poetic realism equation. The final shot of the barge from above, intrinsically part of the river with the two lovers safely on board is a fitting frame of nature surrounding and neutralising machinery, of subsuming and contextualising it in relation to the cargo of love it’s carrying. Stunning.

The film has found it’s champions in the years since Vigo’s death, now fully restored and able to be enjoyed for as long as is possible. It’s one of Truffaut’s 10 favourite films, it’s influenced geniuses like Tarkovsky and mavericks like Jarmusch. Once seen it’s not hard to see why. 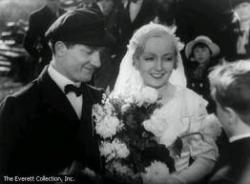 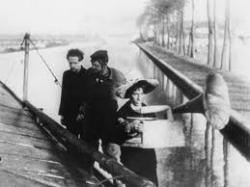 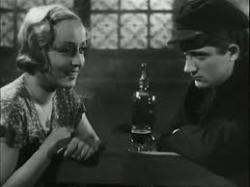 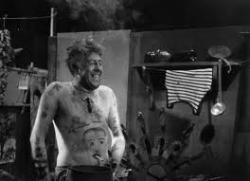 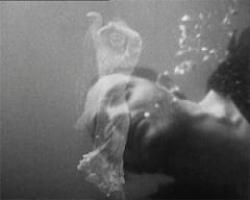 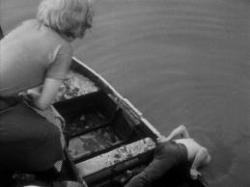