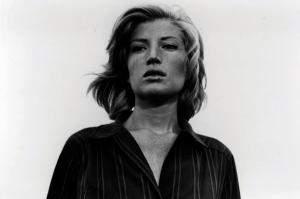 "People often ask us, "How is a picture born?" A picture probably has its birth in the disorder within us, and that's the difficulty: putting things in order."
~ Michelangelo Antonioni

Antonioni conducts his existentialist symphony in bleak minor, showing us that film can be as mysterious in its workings on our senses as music, stirring up responses in the way an elegant harmony or sustained rhythmic or melodic motif does. L’Avventura is also his paean to the endless possibility of absence. He gives us several clues early in the piece as Anna (Lea Massari), a diplomats daughter, is about to make a marriage to Sandro (Gabriele Ferzetti), a man her father disapproves of. Sandro has been away for a month and they are to meet up with friends and take a cruise around the islands. Anna is accompanied by her friend Claudia (Monica Vitti) to the reunion and cruise. They talk about Anna’s feelings for Sandro, where Anna explains to Claudia that the reality of having him present is not as interesting as the possibilities he represents when he’s not there. This idea becomes the heart of Antonioni’s film.

Anna inhabits the realm of the disappointed, she has the privilege to belong to a class where money is not an issue and survival is assured, she therefore has the luxury to concentrate on the abstractions of life, in short her societal position affords her the luxury of an existential crisis. She finds her relationship with Sandro hollow, but the things she’s unable to express get cast aside in the numbing, routine sex that she accedes to upon their reunion, repairing to his hotel room alone and leaving Claudia outside in the plaza, framed in the hotel window and waiting. On the cruise shortly after we meet the trio’s companions, the fellow idle rich, all attempting to keep ennui at arm’s length for as long as possible. The middle aged women either pursue or avoid dalliances with younger men, while Anna draws attention to herself by bringing the swimming activity to an abrupt halt by calling a shark alert, a phoney as it turns out. Alighting onto the island she corners Sandro and again tries to voice her dissatisfaction with things as they stand. Tellingly, as he remains as impervious to her musings as the basalt he stands on, she says ‘you don’t feel me’. Ironically from that point Sandro is condemned to ‘feel’ Anna for the rest of the film.

Antonioni makes an unconventional choice at this point in the film, one that the viewer doesn’t fully comprehend until the end. Anna vanishes. Sandro and her friends become increasingly concerned as they can find no trace of her on the tiny island and eventually call in the police and Anna’s father. Sandro is forced to confront the absent Anna in ways he never did when she was present. The resultant choices he makes reveals confusion and shallowness, the things we assume that were driving Anna away from him. Claudia can’t let go of Anna quite so easily, she takes it as a personal mission to discover the truth. Sightings or half clues take on a life of their own, as she follows these leads, Sandro tags along seemingly out of some sense of duty. Claudia and Sandro form an attachment, hinted at on the island, that deepens as the search progresses. Claudia reaches the point where her feelings for Sandro means she dreads the thought of her friend returning, so the meaning of the search changes. Anna casts an ethereal shadow over the union that neither can deny or easily digest.

L’Avventura is a mystery, but the disappearance of Anna is not it, Antonioni sees that as a superficial mystery. The true mystery is the meaning of love and commitment between two people. Sandro insults Anna by insisting that ‘feeling’ her equated to sex, he doesn’t have the emotional depth to satisfy the connection Anna needed, his easy betrayal of her memory is testament to his narcissism. He needs the beautiful Claudia in order to bask in her reflected attractiveness. Antonioni takes a brief moment to reflect on the sexual politics of the place and time by having a glamourous Italian starlet-wannabe/hooker being mobbed by a bunch of frisky males, she’s supervised by the local constabulary for protection so it’s playful and lightweight mostly, as she exits the police station. Contrast this slightly later with Claudia walking the street alone, with the lustful eyes that follow her she might as well be naked. It’s a disturbing moment and a reminder that primal lust is maybe only a thin veneer of civilised behaviour away.

Claudia, who went in search of Anna, actually finds herself. Sandro, like the idle rich he mixes with, proves as shallow as a toddler's wading pool and betrays Claudia’s affections for the cheap hooker. His inability to find contentment with Claudia’s love causes him to breakdown at the realisation of his hollow heart, dissolving into tears as Claudia places a hand on his shoulder in the memorable final shot. He confronts the behavioural pattern that’s condemned him to superficial relationships with women, always incomplete, never able to ‘feel’ as emotional equals. She at least has transcended his emotional immaturity and seems to be gazing at a future that won’t feature him. Anna, for whom contentment was death, never returns remaining a ghostly absence haunting Claudia and Sandro’s actions.

Antonioni had been making films for over 18 years when he came to L’Avventura, it being his 13th feature he was at the height of his power and a man in touch with his muse. Remarkably he had written the screenplays for all of his films, long before the writer/director credit became commonplace. In L’Avvventura, as he would in his later masterpiece L’Eclisse, he uses large backdrops and empty spaces to contrast the small moments of heartbreak, architectures of nature and man that mock petty human foibles. All emotion will pass but beauty will stand, and beauty of spirit will remain an elusive ideal. The visual ‘music’ of an Antonioni from this period is beguiling and mystical, themes are reiterated and motifs re-incorporated in the same way a great piece of aural composition insinuates its way into your psyche. Antonioni wrote the notes and waves the baton with elegance and style, and with the gorgeous Monica Vitti playing ‘first violin’ how could you not fall under its spell? If you’re open to it, this film will fill you in ways few others can. 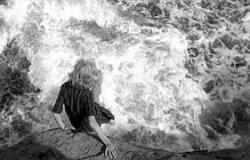 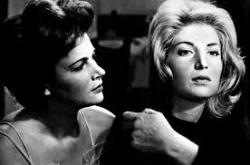 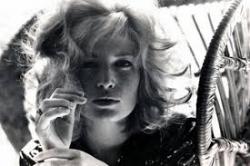 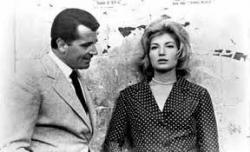