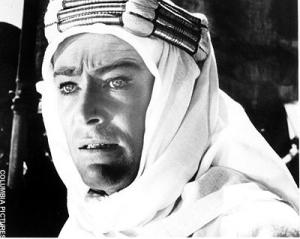 " I think people remember pictures not dialogue. That's why I like pictures"
~ David Lean

Lawrence of Arabia  comes across as a miracle of cinema when weighed against the empty, bloated ‘epics’ of recent times, all fake CGI grandiosity but no style, no script, and no ‘gravitas’. Lawrence  has one of the best scripts ever committed to celluloid, a photographic legacy of incredible and indelible images and a lead performance from Peter O’Toole that ranks amongst the best of all time. David Lean had acquired the necessary clout from the massive success of Bridge on the River Kwai  and was finally able to gather enough resources to attempt a film as ambitious as the 3 1/2 hour plus Lawrence.  Sam Spiegel was the American producer who stumped up the money and held his nerve while Lean took two years to bring his vision to fruition, meticulously and brilliantly.

Lean had been interested in the story of T. E. Lawrence since his editing days in the ’30s, and after considering making a film on Ghandi to follow Kwai,  he abandoned that in favour of a biopic on Lawrence. David Lean employed his Kwai  scriptwriter Michael Wilson (uncredited on Kwai  because of the despicable blacklist, which also extended to getting no credit on Lawrence) to do the script, but after finding it unsatisfactory he had it re-written by playwright Robert Bolt. Lean had to buy the rights to the story from Lawrence’s brother, A .W. Lawrence who ran the estate, and who retained final script approval. Wilson’s script apparently focussed on the historical events, whereas Bolt turned the spotlight onto the type of man Lawrence was, which in turn allowed Lean to make an epic that worked on several levels. Brando was announced as the lead but got no further, Albert Finney turned it down and so when that fell through the part went to an unknown, lanky Irish stage actor who created one of the great parts in all of cinema.

T.E. Lawrence was very much a product of the British media and military myth making machines, becoming somewhat of a 'boy's own' hero to a generation of schoolboys, like Gordon of Khartoum before him, hungry for tales of thrilling exploits on the outskirts of the empire. Lean opens with the events surrounding his death and his burial at St Paul's where everyone who knew him agrees that no-one really knew him. Bolt's attempt to unlock this mystery begins in Cairo in the mundane bureaucracy of empire, a bored Lawrence as a junior officer is looking for a chance to get more involved in the war effort in the middle east. It arrives with a chance to 'find Prince Faisal', a key ally of the British in fighting the Turks, then allied to Germany. Lawrence treks off into the desert and in one of the many superb sequences he encounters Sherif Ali (Omar Sharif) as if a vision emerging from a mirage, and his deeper education into the ways of the desert begins.

Ali takes Lawrence to Faisal (Alec Guinness), and soon because of his local knowledge Lawrence starts to take primacy over his ranking officer Colonel Brighton (Anthony Quayle) in dealings with the Arabs. Lawrence proposes a bold attack across land on the Turkish held Aqaba, which is only defended from sea attack, and proceeds to cross the desert with the aim of gathering the support of nomadic desert tribes. He enlists the wary tribal chieftain Tayi (Anthony Quinn), who asks of Lawrence "who are these Arabs you speak of?"  underlining the problem of unifying a nation that does not see itself as a nation. The mad attack on Aqaba succeeds and Lawrence becomes a hero amongst his peers and is promoted accordingly.

Here is where what could have been a routine adventure-war film turns, as the subtle psychological probing that Bolt has set up earlier pays off. Lawrence has been severely affected by the grueling desert battle, fighting not only the environment but also many demons within, he is a broken man.  British interests in the future carve up of the crumbling Ottoman empire however require him to continue and General Allenby (Jack Hawkins) talks him into returning to the fray. Lawrence continues, wedded to Arab independence and unaware that the future territories have already been divided up under an 'agreement' between two French and English civil servants, semantically allowing the military to say there has been no 'treaty'. The real-politic of the situation eventually wears Lawrence down and on the back of his own hubris he's captured and tortured by the Turks, being raped in the process, and again confronting the masochistic elements of his own psyche.

Lawrence attempts to bring all the parties together after the fall of Damascus, an event that omits to mention (as does Lawrence's book) that the surrender was accepted by Australians who beat Lawrence to the punch. The Arab tribes remain fractured and colonial interests keep them splintered and unable to consolidate power, just as they had kept them toothless by denying them artillery during the war. The British parliament voted through the Balfour Declaration during the war, which dedicated the government to the establishment of a Jewish homeland in Palestine and every action towards the Arab peoples needs to be viewed through that prism, although this gets no mention in the film. The fact that this ambition was brought to fruition after the next world war via the ceding of British controlled Palestine has been a problem for the world ever since.

Lawrence wore his notoriety in a contradictory fashion, as he did most elements in his life. He both enjoyed and despised his own fame, fanned and decried his own myth, and this is what makes any exercise into examining what makes him tick so fascinating and what gave the brilliant Peter O'Toole so much to work with. While the entire cast of top notch Brit character actors is never less than excellent, and also the obligatory big Yank star (Quinn) is equally good, it is O'Toole's Lawrence that dominates proceedings. O'Toole found nuance and depth in every facet of his performance, and became a star overnight, as did Sharif in his memorable western cinema debut. O'Toole's maintaining the level of performance over such a long shoot and delivering such consistently breathtaking results is the framework from which Lean was able to hang his literary and visual epic.

David Lean took some visual clues from the poetic framing John Ford applied to his outdoor epics like The Searchers  and, together with ace cinematographer Freddie Young, he was able to conjure such visual alchemy that it's set the standards for intelligent epics ever since. It pretty much won every award in every category it contested and made Lean's reputation as a maker of epics after many years of making mostly smaller, taut and stylish British films, and he now became an 'international' filmmaker, maintaining his relationship to many key personnel that made Lawrence of Arabia  so memorable.  Stunning, timeless. 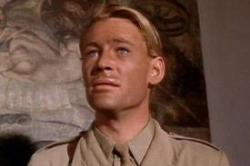 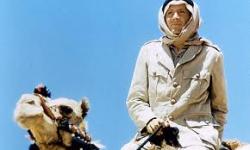 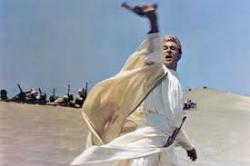 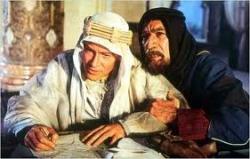 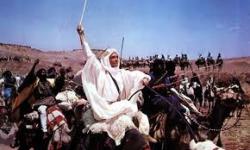