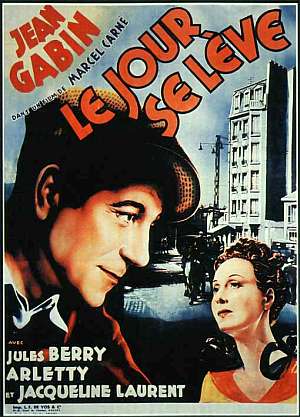 "Photography does not create eternity, as art does; it embalms time, rescuing it simply from its proper corruption."
~ Andre Bazin

Le Jour se lève  is another gleaming gem in the Marcel Carné  canon. His work from the mid 1930’s to the late ’40s represents some of the finest sustained filmmaking in the history of cinema, and when the phrase ‘poetic realism’ is trotted out,  Carné's name will not be far behind. The set up is pure film noir, Francois is a gunman holed up in an impossible situation, and all because of a femme fatale, actually in this film, two. The first is Clara, played by Arletty, who had already starred to great effect in Hotel Du Nord  for Carne and would achieve immortality in France with her iconic role of Garance in Les Enfants Du Paradis  under his direction. This despite being tried and condemned to a short prison sentence for being too close to a Nazi officer during the occupation of Paris. Her comeback line when quizzed on the affair was priceless "Of course, my heart is French, but my arse is international".  Tres formidable!  The second woman is Franciose, a seemingly naive florist, played by Mady Berry. The gunman is the embodiment of French masculinity at the time, Jean Gabin. His work through the ’30s and ’40s for  Carné and also Julien Duvivier and Jean Renoir is as good a body of work ever collected by any actor. Gabin’s range was extraordinary, a light touch for the love scenes and out and out brutishness when needed. Dark or light, whatever emotion was needed Gabin would go there, fearless and convincing.

Francois is seen working in a tough, physical job, blasting big steel machine components. Immediately in this testosterone laden environment he encounters a beautiful young woman carrying flowers, and of course polar opposites attract. Carné wastes no time in showing us contrasts in characters that could easily degenerate into stereotypes but never do. After a few weeks Francois is in love, but the flower girl is coyly keeping him hanging, and we soon find out why. She has a prior friendship with the villain of the piece Valentin, played with slimy efficiency by Jules Berry, and he seems to still have some sort of hold on her. In the interim Francios hits it off with Carla to complete the quartet and all now proceed to play relationship chess. Carla and Francois are using each other with no sentimentality at all attached, both understanding it’s the flower girl who owns his heart.

Carné plays out the lovers dance in flashback as the police try to flush Francois from his fourth floor apartment. It’s soon clear that Francois is out of his depth in this hurtful game, Valentin and Clara are old hands at duplicity and revenge, indeed the flower girl herself is more than adept at keeping up. Francois, a wounded confused soul sees his one chance at happiness threatened and falls back on the skill of a manual worker, put a tool in front of him and he will use it. The community regards him as a good man, he replies ‘everyone kills a little, bit by bit, so that you don’t notice’. The final shot as the tear gas fills the apartment is visual poetry, melancholy and memorable.

The denouement is of course downbeat, fatalistic and very French. Carné  uses quite theatrical and elaborate sets that give him a lot of control over where he can move his camera. He did the same in creating a beguiling river bank street in Hotel Du Nord  and the technique reached it’s zenith with the breathtaking grand boulevard of Les Enfants Du Paradis.  This artificiality did not endear him to the all powerful Cahiers critics it seemed and his style lost favour. Seen from a 21st century vantage point he has created a dream world of Paris, his apprenticeship to Clair was obviously not wasted, as the canvas he used to put motion and light to Jacques Preverts words is totally entrancing. And what words they are. The screenplay is sharp and lean, giving all 4 main characters the opportunity to voice their natures and stake their territory. Human desire is laid bare, the lovers stumble about in the terrain of the heart, sometimes directionless, but not without motive. When interests intersect a brief respite is gained, but when interests collide it’s every heart for itself no matter the consequences.

Carne was a brilliant creator of illuminating a humanist truth through a theatrical prism. The worlds he created were compelling and timeless, so much so that his work will date less than many of his contemporaries or of some of the Nouvelle Vague  generation who were his biggest critics. C’est ironic n’est pas?  (The fact that  Carné also worked as a published film critic prior to becoming a director should also not be missed!) Hollywood did it’s own re-make, The Long Night  with Henry Fonda starring and Anatole Litvak directing and it’s actually pretty good despite the changed ending. The disaster of RKO imperiously trying to have the prints of  Le Jour se lève   destroyed is too stupid to contemplate, but it serves to remind that 'show business ' is two words, show and business and some appalling things have been done under the impulse of both. Whilst Hollywood had it’s strengths it’s refreshing to find the grit and depth that was often missing there can be found in the French cinema of the period, and none moreso than this fatalistic masterpiece from an artist at the top of his game. 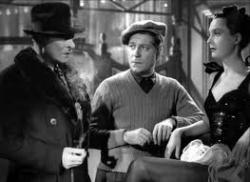 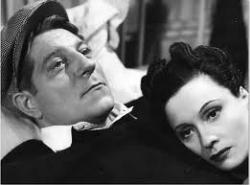 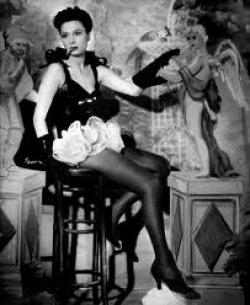 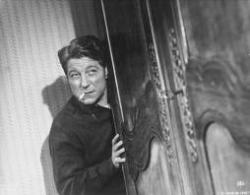