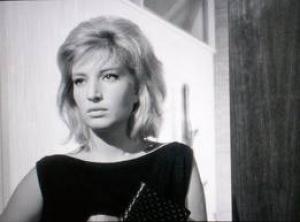 Michelangelo Antonioni's 1962 film L'eclisse  was his further meditation on the power of silence and an exploration into the nature of absence, the third feature in a trilogy of middle class relationship films, starting with his masterful L'Avventura  in 1960, and the follow up La Notte,  with Jeanne Moreau in 1961. Monica Vitti again stars, as she did in L'Avventura  as Vittoria, and French actor Alain Delon takes the male lead as Piero in one of his best roles of the period. Spanish actor and Luis Buñuel regular Francisco Rabal plays Riccardo, the older man who Vittoria breaks up with at the start of the film. The crisp black and white cinematography is by Gianni di Venanzo, who had shot La Notte  for Antonioni and who worked with other notable directors like Fellini, Rosi, and Losey.

Antonioni opens the titles with a jaunty pop sounding tune, before it breaks into ominous and doom laden piano chords, and right away he's given us the film in miniature, a relationship arc we'll observe of one that opens with joy and lightness and collapses into gloom. Visually we arrive in the middle of an argument between a couple, Vittoria and Riccardo, but all we have is silent tension for nearly 3 minutes as she stalks around the tastefully decorated middle class apartment and simply says, "I'm leaving".  A stunned Riccardo begs her to stay, "When did you stop loving me"?  he asks, "I don't know"  is her reply in monotone. She goes the next day to the stock exchange break the news to her mother, who invests her money in the latest hot stock tip with a smooth trader called Piero, who when asked what he's doing replies "Gambling".  Vittoria's mother is too self centred to take in any news at all about her daughter and Vittoria then seeks solace with her friend Anita in the apartment block. Together they visit Marta, who's husband has businesses in Africa, and get drunk, Vittoria dressing as a native to let off steam. Vittoria flies in a plane with Anita and her husband to Verona, where Vittoria dreams of an idyll away from the demands of the world she knows.

Vittoria can't identify the reasons for the feeling of emptiness she experiences, and in reaching out to a disinterested mother, distracted by a stock market collapse, she strikes up a relationship with Piero. Piero's world of trading is a riot of winners and losers, easily identified to him, less easy is working out the angle on a relationship. Vittoria asks, "Where does the money go"?  trying to understand, "Nowhere"  he replies. He comes around to her flat one night, but a drunk steals his sports car, the next morning Vittoria and Piero meet as the police are dragging it and the now dead driver out of a river. Piero is more concerned with the damage to the car than with the dead body. Later they arrange to meet at the corner of a building site, and both show up early to the rendezvous. Antonioni focuses on the little actions happening all around the location. A horse trots by, a pram with a baby is pushed past, the wind rustles the leaves, the water of a faucet drips into a trough. Vittoria observes to Piero that his trading job is like a boxing ring, but he tells of his passion in the gladiatorial surrounds of the Exchange, "passion for what, Piero"?  she replies. They have sex and vouchsafe eternal love towards each other, as they dissect the matter in a park afterwards. "I feel I'm in a foreign country"  says Piero. They agree to meet later at the same spot but neither turns up.

Antonioni boldly used space and architecture to balance the human components of his existential essays, and never more so than the ending of L'eclisse,  where we feel the absence of the lovers even more profoundly than any histrionic break up scene might convey. Antionioni fills the same space with the familiar things we saw in the context of them meeting in a happy assignation earlier, and now the same things take on a tone on melancholy, and yet they are the same things! We invest our own meaning in the world we encounter, and Vitorria's struggle is to see things as they are and to respond in a way that in consistent with her 'true' self. The divertissement that Piero represented is a hollow hope, and a fatalism that imbued their last moments together plays out fully, as the wind rustles the tress and water drops out of the tank into a gutter and a horse trots by.

Vitti is again the perfect face for Antonioni's visual framing of alienation and confusion, where reflection and repose replace action and driving narrative. Delon's oily-slick social climbing yuppie is a neat comment on the emptiness of pursuing money for it's own sake, and his performance is measured and authentic. The legacy of Antonioni's radical approach can still be found in bold filmmakers like Michael Haneke, who will hold a moment so long that some other sense takes over in the viewer, and almost another way or processing information is required to make sense of film at this level. Antonioni went from here to his first colour film, Red Desert  again with Monica Vitti and also with English actor Richard Harris and then to his English language period, with the wonderful Blow Up  in 1966, and then onto his two American films, before he returned for another run in Europe. L'eclisse  represents Antonioni at the high point and culmination of his 'power of silence' period, a brilliant and thought provoking film from a cinematic master. 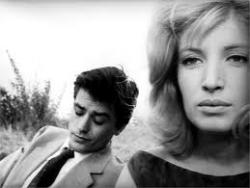