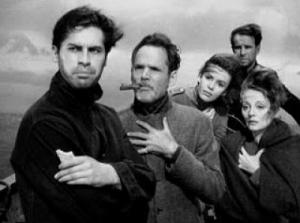 'I’ve become a body of films, not a man. I am all those films.' ~ Alfred Hitchcock

Hitchcock’s filmic realisation of John Steinbeck’s Lifeboat is a master-class in economy and visual wit, elegantly handling the separate and collective catastrophe’s that envelope the occupants of the titular vessel. Steinbeck wrote the story at Hitchcock’s suggestion, after Hemingway could not, but later disassociated himself from the film, suggesting it had undertones of racism. Jo Swerling and several other uncredited writers fleshed out the screenplay and Hitch began filming for Fox in August 1943, with Germany nowhere near as well positioned as when the idea was mooted much earlier. The film is thus the servant of two master’s, Steinbeck’s social realist tropes and Hitchcock’s wartime propaganda message, but mostly coalescing into a satisfying and coherent whole. Hitchcock’s frustrations were evident during the first year of the war, where it was effectively illegal for expatriate Brits to gather together in Hollywood in order to consider ways to encourage and accelerate America’s entry into WW2. Hitchcock spoke through his films, notably Foreign Correspondent and Saboteur. If Lifeboat arrived too late to encourage entry its themes of collective effort against a mutual enemy and the consideration of what is acceptable retaliation, of uncovering the darkness in yourself in order to fight, had one eye on a post-War world.

A ship is sunk in the North Atlantic by a German U-Boat, the flotsam of the wreckage floats past, neatly summing up in microcosm the type of people and cargo on board, a red cross box, a New Yorker magazine, playing cards, spoons, a child’s bottle, a dead German and a checkers board representing the type of game of position that will engage the survivor’s as they struggle to board the lifeboat. First aboard is a journalist Connie Porter (Tallulah Bankhead) taking advantage of the story opportunity the event presents, when Kovac (John Hodiak), the boiler room worker, crawls on he’s disgusted with the fur-clad, social climbing woman’s descriptions of what she’s captured in her lens. Porter shows no regard for anyone else and after she attempts to salvage a baby’s bottle of milk, he swats it with the tennis racquet she’d grabbed and says ’why don’t you wait for the baby’s body to float by’? No maternal feelings there. Gradually more survivors make their way to the boat, each representing different parts of society. A woman comes on board clutching her bundled baby, she’s in shock and in denial that the infant is dead. A German, Willi (Walter Slezak) crawls on, survivor of the U-Boat sunk in the exchange. Kovac is suspicious that he is the U-Boat Captain, but Porter speaks fluent German and says he claims to be only a crewman, Rittenhouse (Henry Hull) the capitalist argues with him as he want to throw the ‘Nazi buzzard’ overboard, and all agree he ’couldn’t help being born German’. The group all agree that the law should be followed and consider the German a prisoner of war.

The black porter George (Canada Lee) delivers a prayer for burial at sea, adding a level of dignity that eluded Rittenhouse’s stiff attempt. The mother jumps overboard at night to slip away from the boat un-noticed. The group are optimistic at first about being picked up, Rittenhouse starts to take charge and delegate areas of responsibility, only to encounter resistance from Kovac. Gus (William Bendix) is deteriorating from a wounded leg that’s turned gangrenous, and the German is the only one able to carry out the necessary amputation. The boat puts their trust in the seafaring skills of Willi, but he secretly is leading them towards German shipping lanes. A storm hits the boat and food and water is lost, as the days drag on they all deteriorate, except the Nazi who has some water secreted away. As Gus falls into delirium the German pushes him over while the others are asleep saying, ‘remember your name is Schmidt’, a reference to Gus’ parents Anglicizing his name to Smith. Ironically Willi, by his cunning and stealth has positioned them into an area that will allow rescue, but by whom? when the group are informed after finding the water they go into a rage and throw Willi overboard, stopping him from getting back aboard by hitting him with Gus’ shoe. The group struggle on and just when it looks like an enemy ship will pick them up after all that ship is destroyed by an allied vessel that comes steaming to the rescue. In the meantime another young German climbs aboard and pulls a gun on the group. Rittenhouse says 'you can’t treat these people as human’s, you have to exterminate them’. Jarret (Hume Cronyn) remarks that he’s thinking about the people who died when the question is asked, ‘what do you do with people like this?' Porter says, ’we’ll let them decide’.

It’s a poetic ending inasmuch as it affirms a better choice than the mob rule that killed Willi, all of the group feeling diminished by submitting to the herd instinct and murdering the man, who by his actions had put them in a position to be rescued. Hitchcock deliberately made his villains smart and attractive or accomplished, knowing that to overcome a worthy adversary is a better dramatic proposition, not to mention a man who rose to Captain a U-Boat obviously had leadership ability. The representation of business is admonished by reminding us that America profited after the last war and would do so again, not to mention the profiteering that went on for 2 years prior to it’s entry into WW2. Rittenhouse has an eye to the main game that would see the massive retooling of the industrial war effort to produce peace time consumer goods, that output coupled with the enormous savings pool the war bonds effort represented saw America constitute over 40% of global consumerism during the ’50s, an unprecedented domination. The workers on-board however are a mixed bunch, Jarret is ineffectual but decent, Kovac is prone to acting first and thinking later and Gus is easily led. All find themselves in a challenging situation that they are not prepared for, only Willi was able to adapt and plan in order to overcome. Hitch’s message is a simple one, that common effort can defeat the most determined enemy. Willi’s hubris is part of his undoing, bragging to the group of Aryan superiority after his scheme is discovered, not realising it will arm the group with a resolution to combine their talents to defeat him, blinded by his own arrogance.

The ensemble cast is fine, with Bankhead, a too infrequent screen presence making the best of it, in a brilliantly judged performance full of spark and sass, but also quiet and vulnerable when needed. The beef that Steinbeck had about the black character seems an over-reaction, as Canada Lee gives his George a great deal of depth and dignity, in an era when his kind were clearly treated as second class it seems churlish to not admit it. Hitchcock made brilliant use of the one setting, the claustrophobia almost being another character in the boat. America at the time of the release not interested in a theme that played as a plea to enter a war they were now winning, so it was a little redundant before it took its first ticket and fared poorly at the box office. Some critics complained that it glorified the German character at the expense of the others, but they completely missed the point, others recognised its quality and it has since found acclaim as a great example of Hitchcock’s contained setting films, like Rope and Rear Window, showing a mastery of space and character in order to provide a dimensional cinematic experience, albeit with a little humanism in the message. Lifeboat warns that something is lost in ‘becoming a monster in order to defeat a monster’, with Hiroshima and Nagasaki not far away it was a message that fell on deaf ears.

Overall a fine film and a worthy entry in the full to overflowing Hitchcock canon. 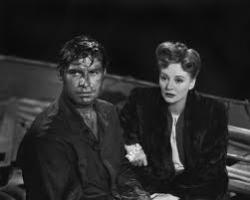 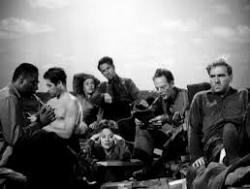 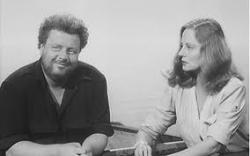 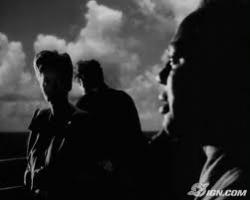 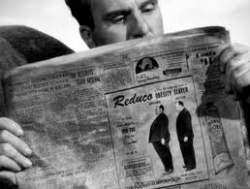 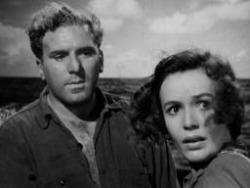 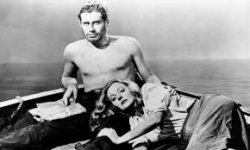