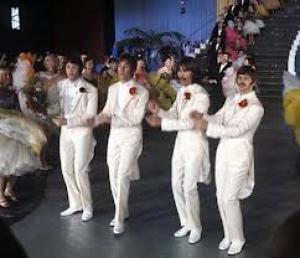 At the very end of 1967, the Annus Mirabilis of The Beatles, the lads decided on a romp around the counties in a tour bus to be the basis of a feature length film for TV and launched it on an unsuspecting, though heavily expectant public, to much head scratching or thundering indifference. The BBC had purchased the film on spec, and aired it on Boxing Day, to a bloated and sozzled audience, stuffed and hung-over from Xmas the day prior, and Magical Mystery Tour  did not aid anyone's digestion issues. What happened? here was a creative group at the height of their powers, coming off the masterful Sgt Peppers  album, and the triumph of the worldwide showing of the summer of love anthem All You Need Is Love,  with the world at their feet. Did they over-reach? Is the film as bad as all that? The truth, as ever, lies somewhere in between.

Ringo and Aunt Jessie are to take a mystery coach ride, an idea familiar to the English, where passengers board a bus and don't know where it's going. The bus is full of various types and ages of people off to see some sights and have some fun. The hyperactive Jolly Jimmy Johnson, and the bit-of-all-right Miss Wendy supervise the bus tour. Ringo argues with Jessie, who attracts the attentions of Mr Bloodvessle, and a bus romance blooms. The tour stops for some close inspection of an army depot run by Victor Spinetti's spluttering Sergeant, spend some time at the airfield to indulge in some funfair type games, before heading to the seaside to wet their feet. A piano accordion player leads the bus in some old fashioned sing-a-longs and the boys end up at a strip club in Soho. Good clean fun.

When viewed in the new millennium it seems interesting, charming and fairly innocuous. It lies somewhere between cinema's deconstructionist avant garde, a home movie, an excuse for some brilliant music 'videos', and some pre Monty Python humour. The framing narrative device of using the mystery tour is a telling one, it speaks to four English lads trying to reconcile the strange world they've ended up in with that of their roots. In 1967, they were kings of the world, feted as geniuses and their every utterance pearls of wisdom to be carved in marble. The wheels started to wobble slightly for the first time with the untimely passing of their manager, protector and real-world buffer Brian Epstein. The Beatles dabbled with transcendental meditation and the Maharishi, attempting to deal with the enormous pressures as best they could. In lieu of better advice, like 'get a good director', the boys attempted to direct the project themselves, and in that department they did over-reach, and it accounts for the patchy or lumpy nature of the end product.

The joys of the film are, however, manifold and not surprising. The piece comes into it's own when the band focuses on the music, and the highlight is undoubtedly Lennon's masterpiece I Am The Walrus,  which is filmed as a surreal and inventive romp around a disused airfield. In an era where 'promotional clips' for songs were a rarity, this elevated the nascent genre to an art form, and set the standard for all the advertising kids who moved into 'music videos' when MTV came to town in the 1980's. McCartney's Fool on the Hill  is well served by some moody shots in French hillsides, and Harrison's wonky Blue Jay Way , is equally as mysterious and atmospheric. The sing-a-longs are a throwback to the boys they were and the stock they came from, and are handled with affection and respect for the common people, not embarrassment or derisiveness.

The humour is at the same level, the lads obviously enjoying being a part of 'normal' people for a short time. They populate the bus with every type of garden variety Englishman, and revel in that fact, making it a feature of the piece. The humour is in the tradition of the Goons, the same wellspring that gave us Monty Python, and it's plain to see some of the offbeat stuff that made it to the screen found fans in the Python team. The Pythons wanted to send their first feature film, Monty Python and The Holy Grail  out with Magical Mystery Tour  as the supporting feature on a double bill for it's release in 1975, as a sign of their affection for the film. Lennon shovelling spaghetti with a shovel seems very influential when you consider the Mr Creosote sketch for Monty Python's Meaning of Life.  The fact that George Harrison ended up producing The Life of Brian  seems very apposite, and he often said he thought the spark of creativity the Beatles had was passed on through Python.

The film is not without its social context, as Ringo was quoted much later as saying , "In 1967 flower power hadn't reached Leeds",  it's refreshing to see they sided with the normal Brits, not the 'beautiful people'. Older people are shown as full of life and vital, a distinct contradiction of the youth counter culture that looked to The Beatles as avatars of the age. Jesse finds romance with Mr Bloodvessle and one of the touching sequences is his wooing of her on the beach, and while both of their physical appearances are out of the 'ordinary', their affection and eventual kiss is shown as normal and beautiful, as if they were Carnaby Street models. In this sense the film is subversive and cutting edge, and much of that was missed at the time

It's fitting that the lads embraced their 'Englishness' at this time, and led the way for Pete Townsend to write Tommy,  with its Butlins references, and for Ray Davies to explore the territory with his Village Green Preservation Society.  The Beatles had conquered the world several times over by 1967, as a quasi-'boy band' pop phenomenon, then as an inventive musical quartet breaking new ground until they were the psychedelic rulers of the counter culture. After the crisis of Epstein's death, in an era where they were already turning their gaze backwards with Penny Lane  and the epochal Strawberry Fields Forever,  it was natural they attempt to reconcile their journey and arrival at a destination they could barely dream of. They celebrate 'normal' English life, fish and chips at the seaside, a jolly 'knees up' with the 'relies', and contrast it with the surreal environment they had come to know. McCartney said in some ways they were 'reporting back' to people at home, 'we've found this, take a look'.

Magical Mystery Tour  was a disaster on its Boxing Day showing, not helped by the fact its psychedelic colours were not seen in the black and white transmission. It doesn't have the formality of the Richard Lester directed films but it is an inventive, subtly subversive and credible artistic document from a group pushing it's resources into areas of rare exploration. A better director may have made something truly remarkable, but its influence on Rafelson's Head  and on future Python pieces should not be underestimated. It is a much better piece than what it's given credit for, and contains many moments worth the price of admission. Roll up indeed. 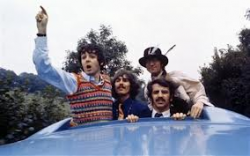 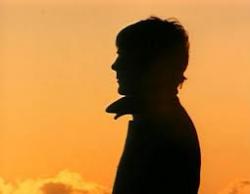 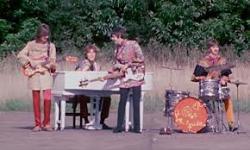 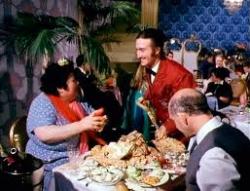 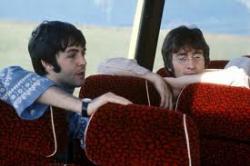 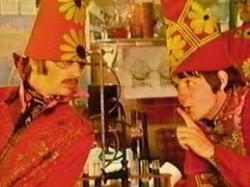