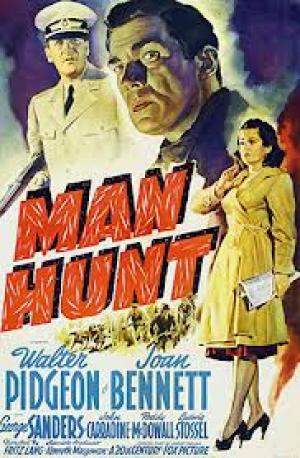 Lang's "I can't believe it's not Hitler"!

Fritz Lang was in something of a hole at 20th Century Fox during the early ‘40’s, having been handed only a couple of routine westerns in The Return of Frank James  and Western Union,  in the preceding few years, which both did good business. Lang was still not the first choice for the pre-war thriller as John Ford was lined up to direct the Geoffrey Household novel, Rogue Male, rendered as a screenplay called Man Hunt by Ford’s regular writer Dudley Nichols. Ford opted instead for How Green Was MyValley,  after William Wyler dropped out of that Zanuck pet project and Lang then stepped in to take on the anti-Nazi film, in many ways he was the obvious choice all along. Lang had fled the Nazi’s for Hollywood in 1934 and only made a handful of films, one being with producer Walter Wanger in 1936, the wonderful proto-noir You Only Live Once,  and he called upon Wanger’s wife Joan Bennett to take the female lead in Man Hunt, the first of four films he would make with the actress. Further evidence of Ford's aborted involvement is the presence of his stock company actor John Carradine in a typically colourful supporting role.

In the months before WWII Alan Thorndike (Walter Pidgeon), a famous hunter, stalks through the high Bavarian forest and takes a position opposite a chalet that houses Adolph Hitler. The hunter lines up the Nazi leader in his sights and squeezes the trigger. A patrolling guard finds him and he’s taken into custody, tortured and lined up for death, before escaping back into the woods. Thorndike finds a ship that will take him back to England but soon finds Nazi agents trailing him and finds shelter with Jerry (Joan Bennet), a prostitute in a run down dockland part of London. Thorndike attempts to use his influence in the higher strata of the Establishment to smooth over the diplomatic disaster, while he fends off attempts by the Germans to finish him off.

Canadian Walter Pidgeon embodied the decent British gentleman who hunted the ‘unnamed’ Nazi leader, insisting to his captors that it was purely a "sporting stalk",  meaning he had no intention of actually shooting the despot. The central moral question is posed when Thorndike actually loads a bullet into the breach after the dummy shot, and it’s via this mechanism that Lang tacitly asks the audience “what would you do”?   remembering its American audience was notionally neutral in 1941. George Sanders plays Quive-Smith, his Nazi interrogator, with brio and relish, deriding the British “softness and decadence”  as he outlines the Nazi ethos necessitating they “destroy, in order to create a new world”.  The story manages to maintain interest via a ‘hunter becomes the hunted’ narrative, as Thorndike tries to elude the Nazi assassins who follow him to England.

The standard romantic subplot involves the kind hearted prostitute, Joan Bennet makes a fair pass at a cockney accent but her involvement is peripheral to the main event. Ultimately she affirms Thorndike’s faith in human nature and provided a reminder of the decent, ordinary people that the war and Hitler’s mad ambitions would be putting at risk. She gives Thorndike his emotional reason to finish his ‘mission’, one that initially had been an ‘intellectual’ quest of a sportsman pursuing a rare bird of prey. The arc of the story sees Thorndike connecting with his inner self and admitting the possibility of ‘warm’ emotion and engagement, where previously he’d stayed aloof and ‘cold’. Thorndike is stung into action once his sense of justice is stirred by the appalling behaviour of the Nazi’s, as in his estimation they are obviously not playing 'cricket', and in Thorndike’s world, form and rules are the cornerstone.

Lang tracks an awakening, in a class sense, for Thorndike, as the cabin boy Vaner (Roddy McDowell) and prostitute Jerry challenges his patrician worldview. The privileged status quo that supported the upper class Thorndike, as he confronts the fascist threat is undermined as he realises there is little help coming from his peers. His assertion to Quive-Smith that “Questions will be asked in high places” should anything nasty happen to him proves to an empty claim, reflecting the fact that many of the upper class of English society supported much of the fascist agenda and Chamberlain's eventual appeasement via the Munich Agreement.  Though not expressly indicated to be a 'lady of the night', as it was forbidden by the censorship of the period, Jerry actually demeans herself to a London Bobby by ‘posing’ as a prostitute on a bridge in order to protect Thorndike as they part. Thorndike comes to the realisation of the possibility of kindness and decency in all levels of society as he battles against the indifference of his own class and the zealotry of his opponents.

Veteran cinematographer Arthur Miller, another John Ford favourite who’d done Young Mr Lincoln  and was assigned the project when Ford was on board, shot the piece for Lang, and the film noir overtones are unmistakable. Ironically he would win an Academy Award for Ford’s How GreenWas My Valley  the next year, the first of his three wins!  Lang was able to bring the dark and gloomy visual tones of his German thriller classic M  to the USA for the first time, and in doing so helped give birth to the Film Noir genre, a form he proved to be a master of in the coming years.

Man Hunt  ran foul of the Breen office, ironically objecting to the treatment of the Nazi’s in the screenplay! Given the extent to which Hollywood would exploit the Nazi’s over the next 50 years as the greatest evil known to man, it’s salient to recall that the US government’s isolationism was in fact legislated, and filmmakers were running the risk of breaking the law by encouraging American involvement in WWII. The ‘greatest evil known to man’ was effectively given two years grace to run rampant through Europe before a little incident at Pearl Harbour shook America out of her isolationist stupor. It was also that calamitous event that halted a US government hearing into films that had possibly broken that law, and Man Hunt  was one such film under investigation.

It seemed that Fritz Lang had found his metier in Hollywood at last with Man Hunt,  and soon he moved into the similar noir toned Moontide  with French icon Jean Gabin. Lang left that film prior to its completion and then produced a pair of definitive Film Noir’s in Hangmen Also Die,  and Ministry of Fear.  Joan Bennett and Lang then formed a production company and proceeded to create a series of vivid, atmospheric noir’s that contained some of her and Lang's  best work. Man Hunt  is a classic, atmospheric war film from a master filmmaker that sits squarely and proudly at the birth of what subsequently would be dubbed Film Noir. 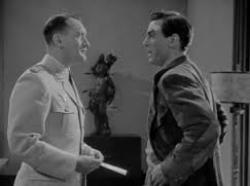 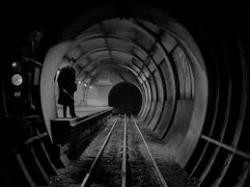 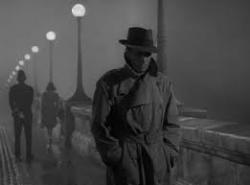 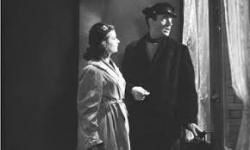 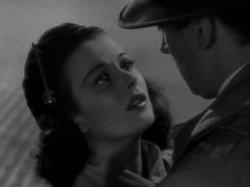