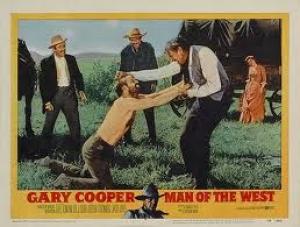 Man Of The West

Mann of the western

The summation of all of Anthony Mann's western tropes and a worthy fin de siècle   for a director who contributed so much to the genre, Man Of The West  is more surprisingly perhaps, an almost emotionally pitched Grand Opera, rather than horse opera level Oedipal morality tale of fear and redemption, and it's hard to believe I just wrote that!. Mann has no trace of a 'shoot 'em up' cowboys programmer, so common for the time, as he takes the form into new territory, the final extrapolation of a line started with Ford's Stagecoach,  and added to by a string of psychological westerns like Wellman's The Ox-Box Incident  and King's The Gunfighter,  in the mid '40's and early '50's. Like the James Stewart western's from that era, that Mann brought so vividly to life, this film focuses on the 'loner with a past', a man in search of a future where previously he could have expected none. Expert cinematographer Ernest Haller, who was so successful at Warner's in the classic era working in black and white, captured the washed out images and muted colour tones that perfectly reflected Mann's downbeat fable, and Lee J. Cobb provides the acting gravitas to take the narrative to another level.

Link Jones (Gary Cooper) is, by all appearances, an average man in Crosscut Texas, and heading via train to Fort Worth to find a schoolteacher for his small town of Good Hope. The Marshal questions Link, it's clear he's familiar with his face, but let's him take the train. En route Link gets friendly with Sam, (Arthur O'Connell), a slick con man who tries to hook him up with an ex saloon singer Billie (Julie London) who's also a schoolmarm, but the train is held up by Dock Tobin's gang. The three are left behind once the train pulls away, and in order to survive in the isolated rural setting Link leads them to Tobin's hideout. Tobin (Lee J. Cobb) is surprised to see Link, who it transpires is his nephew, and after Link's father died Link was effectively brought up as Tobin's son but left years earlier breaking the older man's heart. In order to save Billie from the attentions of Tobin's lecherous gang Link pretends that she's his girl, but he comes into conflict with Tobin's new lead henchman and his cousin, Coaley (Jack Lord), much to the old man's amusement. The conflict is further exasperated by the appearance of another of Link's cousins Claude (John Denher) who has plans to pull a bank job, and Tobin sees it as an opportunity to rope Link back into the gang. Link needs to work out how to keep the other two alive and escape the clutches of his poisonous uncle-father.

Link and Billie get close while he's attempting to find a way free, and she's attracted to him, saying "You're not like them",  "I was"  he replies, "I had a choice, grow up and become a human being, or rot like that bunch".  He tells her he's married in Good Hope and has three kids, and that the town knows of his past. Claude tells Link he's suspicious of him, telling him of Tobin, 'The day you left he cried, you don't have me fooled".  The old man is enjoying the struggle between his men, and it comes to a head on the journey to Lasso, a town with a big fat bank according to Claude. Link ends up leaving Billie with Tobin while he goes to case the town, which ironically is deserted, and the final showdown with Claude occurs there.

Mann is redefining the role of the cowboy 'hero' with Man Of The West,  no longer is there violence without consequences, his lone figure has regrets, fears and is conflicted in ways that were unimaginable for mainstream features during this era. Cooper's age might have been an issue, but Mann ensures the central dilemma works even so, and Cooper's innate decency helps make the premise work. Cooper underplays as usual, and his quiet intensity is a good counterpoint to the broadness of Jack Lord's Coaley and the grotesqueries of Denher's Claude and of Royal Dano's slobbering thug. Mann brings an epic flavour to the struggle, matched by the performance of Cobb, who unleashes a maelstrom of emotion once he's confronted with his prodigal son. Cobb brings an almost Shakespearian dimension to his portrayal, a reminder of his stage credentials and a regretful reminder that he never really had the quality film roles he deserved.

The narrative framework is that the former outlaw Link has wised up, and knows he has to brutally severe his 'link' with a redundant past in order to cleanse himself. "You're a ghost"  he says to Tobin at the final confrontation, and the fact that the drama plays out in a ghost town and a desert is Mann's visual reinforcement of the emotional landscape of the characters. The setting and handling of the final encounters is pure trademark Mann in relation to the natural space and features, and superbly cinematic. Tobin is an anachronism, his days are over and Link represents the future, one that Billie also aspires to and hopes to one day embrace. The mature ending is one for grown up's not for romantic's, as Billie and Link head their separate ways, him to his family and marriage, her to an unknown life without Link as she's unable to accept the school teacher job.

In 1958 as Mann made his final western, the genre was greatly diminished by repetition and lower quality, weekly shows, then ubiquitous on American and global TV. In order to combat this the studios embraced Cinerama and Widescreen formats, but Mann shows all you need is a good story, well told and well acted. The dilemma of a flawed man trying to rectify his past mistakes and build a decent future for himself is particularly suited to the western format, and Mann knew the dimensions he had to explore in this area better than most. A fitting crowning achievement in a genre that Mann made several exceptional films in, such as Winchester '73   and The Naked Spur,  and would make one more with the lesser Cimmaron  in 1960. Cooper only made four more features, two of them western's but this remains one of his greatest films, a nice way for a screen cowboy legend to be remembered, and a precursor to some of the aging cowboy films that would inevitably come as the major stars from yesteryear, like Joel McCrae and Randolph Scott (and even John Wayne) felt the weight of the encroaching years. Jean-Luc Godard was effusive in his praise for the film in 1958, but it did poorly at the box office, even though it's come to be regarded as a classic in recent years, and rightly so. 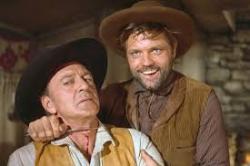 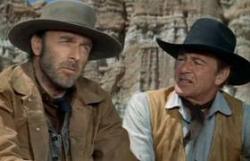