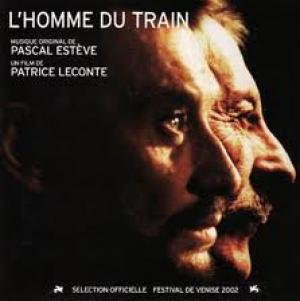 Man on the Train

"Working with different actors is like tuning violins" ~ Patrice Leconte

Patrice Leconte has perfected the art of clarity and succinctness in cinema, in as much as he seems to be able to find properties that can beguile audiences with just a pithy one line pitch. In the case of Man on the Train it’s, ‘mysterious criminal type walks into provincial small town for undefined business and finds unexpected friendship with a much older academic’.  After several brilliant features over a period on many years such as Monsieur Hire,  The Hairdresser’s Husband,  Ridicule  and The Girl on the Bridge,  Leconte continued his good form by creating a fascinating character study in opposites. Man on the Train  is a hymn to the ‘other’, and to the idea that, no matter what our circumstance, there is the nagging human feeling that there is always something we’re missing out on. In what is essentially a two-hander, Leconte found the perfect actors to cast, veteran French rock and roll icon Johnny Hallyday as the criminal, and the grand old man of French cinema, Jean Rochefort as the academic.

A close up on a pair of hands, a man on a train, he swallows some pills and looks out the window. The train pulls up in a small, provincial French town, and Milan (Johnny Halliday) alights. Milan is unable to find accommodation, and having struck up a conversation in a pharmacy with an older man, Manesquier (Jean Rochefort), he agrees to take a room at the retired teacher’s large house. Initially, the two men engage in an uneasy association, wary of each other and unsure of the other man’s motives. The more time they spend together the more they seem to understand each other, and even to yearn to accommodate elements of the other’s life in their own, but both instinctively know fate has other plans.

Leconte essays the seductive pull of the ‘other’, the tendency for humans to think a different life may be preferable to the one they have. “Beware the sweetness of things”  Mensquier warns, before Milan comically asks if he can borrow a pair of slippers. Mensquier sees Milan attracted to the quieter life of the mind a provincial domicile offers, but knows the pitfalls and inevitable ennui that comes with it, and observes the understated addendum, “You can choke on cake”.  The older academe realises that the brutal honesty of Milan reflects badly upon his own timidity, and he later opens up to his sister with new found brio, “We never say what we think”, and then this 'new' Mensquier tells the startled woman, “You married a prick who gave you two cretins”!

Leconte builds his narrative at a leisurely pace, allowing time for the characters to develop and become fleshed out and real. He remains open to the ironic and comical ripples that permeate the set up, and the sight of Milan in slippers, sucking on a pipe and reading in the drawing room is both sly and delicious. Mensquier duly follows suit in acting out his cowboy fantasies, but underneath there is a strand of melancholy (this is a French film remember!) as both men follow almost pre-ordained paths to act out their future according to their nature. Leconte allows the men the rare gift of glimpsing the ‘other’, of almost holding it in their hands, and in true existentialist fashion, they then relate that glimpse to the life they must continue.

Johnny Hallyday is superb as the taciturn, hangdog criminal, and is so good it’s a pity he didn’t find more roles that suited him like this one. Hallyday was a rock and roll legend in France, considered something of a French Elvis Presley, and in his career as a singer in Europe sold over 110 million albums! His film career was not dissimilar to Presley’s, lightweight musical tosh as a youngster, and even a spaghetti western thrown in for good measure in 1969. Leconte delivered him the role of a lifetime with Milan, and Hallyday at least worked regularly as an actor in the following years as a result.

Jean Rochefort is brilliant as his opposite, a film actor since 1956 and a Leconte favourite as this was his sixth film for the director. He puts in a beautifully weighted performance with his Mensquier, touching and authentic in even the smallest detail. Rochefort had worked with almost every French director of note, including Godard, Chabrol and Tavernier et al, even Buñuel, but it may be for his fruitful collaborations with Leconte that he will be best remembered. Also, Rochefort's brave and ultimately heartbreaking attempt to star in Terry Gilliam's version of Don Quixote is captured in the superb doco Lost in La Mancha, and conveys something of the actors fragile health during this period, and remains one of the best documentaries ever made about the film industry.

Patrice Leconte is one of the modern French cinema masters with a proven track record in handling narrative, visual style and A-grade actors with equal aplomb. He rose to prominence in features in the late 1980’s and has hardly put a foot wrong since, reliably turning up every couple of years with a thoughtful, and entertaining work. Man on the Train  is a thoughtful and intelligent film, featuring fine work from the lead actors who bring all their years of experience to the plate, under the guiding hand of a director with rare flair and panache. 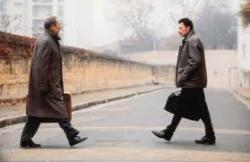 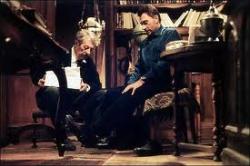 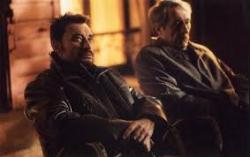 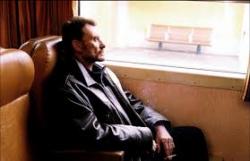