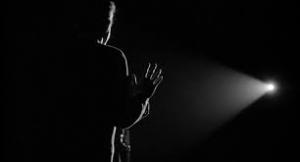 “The McCarthy period was ridiculous and humiliating, deeply humiliating. When I finally did Mickey One, it was in repudiation of the kind of fear that overtook free people to the point where they were telling on each other and afraid to speak out. It just astonished me, really astonished me. I mean, I was a vet, so it was nothing like what we thought we were fighting for." ~ Arthur Penn

Arthur Penn was motivated to tell a story about the cultural and societal fallout from the McCarthy era 10 years prior and turned to an unproduced Alan Surgal play called Comic. Penn was approached by Warren Beatty to make another film (Honeybear) but immediately talked the actor into starring in Comic, the film that would eventually be christened Mickey One. Penn had been recently fired from the big budget WWII film, The Train, by Burt Lancaster who disliked the New York method the director favoured and so pulled rank to hire John Frankenheimer, driving Penn to a determination never to work for the Hollywood machine again, and to make a completely personal project. Penn was also a fan of the energy and style of the French Nouvelle Vague and proceeded to make a film that was part Film Noir but also one that dipped its hat most particularly in a Gallic direction.

A Detroit nightclub comic (Warren Beatty), is seen living the high life, chasing a gorgeous woman, gambling at the tables and working his act to great success. In quick time he finds the Mob are intent on ‘owning’ him and set him up for huge gambling losses due to his indiscreet ways with a mob connected girl, so he goes on the run. He flees to Chicago and disappears amongst the lower depths of the West Side and its poverty and grime, where he steals a new identity and becomes known as Mickey One. Jenny (Alexandra Stewart) ends up rooming with him as he tentatively resumes his career as a stand-up, and she tries to help him straighten his life out, with the aid of nightclub operator Castle (Hurd Hatfield). Mickey trusts no-one and is unsure where his quest to find out who ‘owns’ him and just what it is he owes will take him.

The film is visually arresting in the manner of Godard’s Breathless, full of experimental moves and tropes, testament to Penn’s decision to hire French cinematographer Ghislain Cloquet to shoot the picture. The other key reference would seem to be Truffaut’s most Godard-esque effort, Shoot the Piano Player, in that the same ambience and ‘shaggy dog’ mob story is invoked. Mickey One has the kinetic drive and unpredictability of those Nouvelle Vague masterworks but it also has something of the same aesthetic as those films that inspired the French in the first place, the dark hued Film Noir’s of post war America. Beatty’s persona is that of edgy American angst, unlike Belmondo’s Gallic fatalism or Aznavour’s easy charm, he embodies the existential dilemma of McCarthy era paranoia.

Penn opens the film with a 4-minute, dialogue free series of incidents with The Comic, a bravura piece of visual storytelling where we move from a Fellini-esque shot in a sauna house to a shot at a nightclub with the mob girl’s scarf draped across a drum kit. In an instant we know the fun has stopped and Mickey is to pay a price, one the inscrutable Detroit club owner (Franchot Tone) cannot quantify.  Penn then takes us on another dialogue-lite series of events, and by 16 minutes in he’s established all we need to know with impressionistic visual touches and scant narrative, which in 1965 was unheard of from an American studio film. Columbia executives promptly walked out of their screenings and cancelled a deal with Penn to make another film via the same method, i.e. with no script approval.

Cloquet had filmed the Louis Malle masterpiece Le Fou Follet and had given Alexandra Stewart her start, and it was his suggestion that Penn cast the Canadian beauty and European model as Mickey’s love interest. Stewart had very little experience as an actress and was coached on set by renowned teacher Jeff Corey, who was cast as Castle’s hot-headed colleague, and her tentative approach adds a nice layer of fragility to the Mickey/Jenny relationship. Penn stitches a degree of mystery into his cinematic tapestry at key points, which heightens ambiguity and works in tandem with the fractured dissonance of the visuals and soundtrack. Hurd Hatfield is wonderful as the slightly fevered Castle, calling out desperately to a fleeing Mickey, “I want you”, at one point, injecting an unmissable sexual overtone. Mickey uses sex when it suits him, with the Girl at the beginning and with a co-worker at his menial job, but his relationship with Jenny is driven by another need and is inhibited by his inability to trust anyone.

Penn’s intention was to invoke the McCarthy legacy in his investigation of paranoia in Mickey One is centred around a question of trust. What is the cost to society and the individual if you can no longer trust your institutions, if you can’t trust your co-workers or friends? The assault on freedom of political association by McCarthy and his ilk in the 1950’s bit deep into the much-vaunted liberalism that America prides itself on. Penn asks what it is to be in the thrall of a ubiquitous and invisible cultural force, essentially fascism of thought, and the effect on the fabric of the culture. Penn saw it close up after HUAC turned the movie and television industry against itself and created a Blacklist of ‘unapproved’ workers, something more associated with Nazis than democratic republics. Some people were ritually humiliated and ‘named names’ of suspect colleagues in order to clear themselves, and Penn finds relevance in this when Mickey attempts to toe the line by finding someone to ‘confess’ to before he finally decides to literally ‘stand up’ for his self-respect and live without fear.

Warren Beatty was 28 years old and making his 5th film in 4 years, and his innate curiosity led to many arguments with Penn, although always at the service of the best interests of the film. Beatty was part of a second wave of Method actors, post Brando/Clift and pre-De Niro/Pacino, and brought a keen sensitivity to the role, despite his misgivings with the material. Beatty handled the material superbly, and his scenes where he’s addressing the spotlight box from the stage are beautifully rendered. The film was not a success in Beatty’s estimation, but he extended the hunted/paranoid persona in Alan J. Pakula’s brilliant The Parallax View several years later and employed Penn to direct Bonnie and Clyde two years later, a film that changed the course of American cinema.

With Mickey One, Penn crafted a modern visual equivalent of a jazz improvisation, a tone poem on alienation and set it in the all-American world of showbiz. The film incorporated a surreal dreamscape reminiscent of Bunuel or Fellini and a deconstructionist ethic that could have come from Godard as he pushed the envelope of what an American film could contain. Mickey One was ignored for 30 years but thankfully reassessed in the late 1990’s and its critical reappraisal continues as it remains one of the most interesting and significant ‘non-Hollywood’ studio films from an era before the American Renaissance and the film brat generation that came in the wake of Bonnie and Clyde. 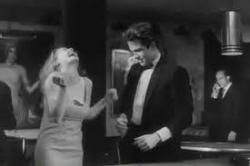 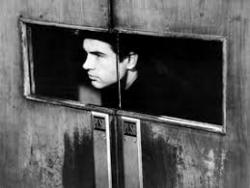 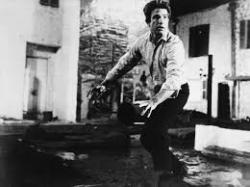 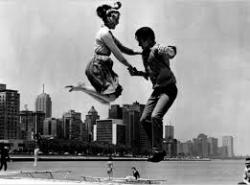