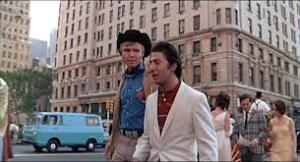 "I'm only interested in one thing -tolerance. I'm terribly concerned about ... the limitation of freedom. That's why I'm more interested in the failures of this world than the successes." ~ John Schlesinger

John Schlesinger parleyed the industry clout he’d gained with the swinging sixties hits Darling  in 1965 and the period drama, Far From The Madding Crowd  in 1967, into an international career with the controversial Midnight Cowboy  at the end of the decade. Schlesinger, who’d started his career as an actor and TV director in London, made the necessary transfer to the US to further his career and the gamble paid off handsomely as Midnight Cowboy  won Best Film and Schlesinger won Best Director at the Oscars in 1969. The script stayed faithful to the racy novel by James Leo Herlihy and was written by Waldo Salt, one of the victims of the McCarthy era anti-communist blacklists. Salt had fled to England, like Joseph Losey (for whom he’d written an American remake of Lang’s seminal M ,  in 1951) and there he worked on the TV series The Adventures of Robin Hood,  starring Richard Greene. Schlesinger worked as an actor on the same series, so it’s possible their association extends back that far.

Joe Buck (Jon Voight) is a Texan dishwasher who dreams of a career as a gigolo in New York, he hands in his notice and heads north dressed in his new cowboy outfit. Joe scores a Park Avenue romp with the middle aged Cass (Sylvia Miles) but his easy going, good nature sees the result turn out differently to his expectations. Joe bumps into Rico ‘Ratso’ Rizzo (Dustin Hoffman) in a bar, who gives him the low down on street life and sets up a meeting with a supposed promoter. Joe hits hard times and ends up in a seedy Times Square cinema for sex with young gay men, before he reconnects with Ratso and they team up to further Joe’s career. The sickly Ratso gets sicker as the pair scheme to make their fortune, with Ratso dreaming of escape to a better life in Florida.

Ratso and Joe represent the disenfranchised under class of the American Dream, and the film exists at the cusp of the American Renaissance era where such questions and observations were being made with much more force and insight, on the back of the counter culture movement. Schlesinger’s aesthetic neatly fitted the era’s boldness and Midnight Cowboy  contains visceral and urgent sequences and imagery, and performances that have become nothing less than iconic. Schlesinger integrated sophisticated visual flashbacks into the narrative, informing and surprising in ways that were fresh and innovative and ultimately influential to subsequent filmmakers, the film burning itself into the collective consciousness.

Schlesinger made a career of essaying outsiders, something as a gay man growing up in repressed 1940’s and ‘50’s Britain he would have had an enormous insight into, and he brings a keen foreigners eye to his American subject. The film opens with a 13 minute pre NYC sequence that sets up Joe’s naiveté and sweet nature, as he sets off for the mythical land for fame as a stud and riches beyond measure. Denied his portion of the dream Joe finds support from the ‘lower depths’, and Ratzo eventually bonds with the goofy Texan who puts friendship above self interest, a novel concept for the scheming Italian-American. Ratzo’s affliction is a physical representation of his mental state, i.e. an emotional cripple and Hoffman integrates the notion seamlessly and effectively with a touching tenderness. Neither ‘loser’ has the skill set to prosper in the urban jungle and ultimately they are reduced to mere freak show exhibits at a Warhol style party.

The mean streets of New York present a quasi-Darwinian environment; survival of the fittest is a daily reality as bodies drop by the way and Joe and Ratzo hang on by their fingernails. Post modern alienation is examined via a fine sequence where TV roulette occurs during Joe’s first sexual tryst, and all under the shadow of the giant M.O.N.Y. banner, which Joe mistakes for the actual spelling of the M word. In God We Trust indeed. Schlesinger milks some ironic comedy out of their deteriorating position, Ratzo advising Joe “Frankly, you’re beginning to smell, and for a stud in New York that’s a handicap”.  He continues, “That dumb cowboy stuff, that’s faggot stuff”, whereupon Joe challenges him, “John Wayne, you wanna tell me he’s a fag”?  Ironically both Jon Voight and Dustin Hoffman were nominated for Oscars for their roles, but lost to… you guessed it, John Wayne. Ultimately Joe sells himself to the gay marks that frequent Times Square in order to fund their tickets to Florida.

Schlesinger found a visual language to match the property, and would expand further on the tropes in subsequent dream/nightmare films like Day of the Locusts  and Marathon Man.  The sequence where Joe and Ratzo arrive on the bus in Florida is visual poetry, the dead Ratzo (in the arms of the de-cowboy outfitted Joe) is seen in reflection only, a ghost at his own arrival at the gates of paradise. Hoffman managed to avoid any possibility of typecasting after attaining wide fame with The Graduate  by ferociously pursuing edgy and meaty roles, and the early ‘70’s proved to be a golden time for the actor with tremendous parts in Little Big Man,  Straw Dogs  and Lenny  et.al, but Ratzo remains one of his crowning glories.  Jon Voight provided a beautiful characterisation as the none-too-bright wannabe, “I may not be a cowboy, but I’m one hell of a stud”.

Schlesinger’s inquisitive lens and fierce artistic intelligence imbues every part of Midnight Cowboy,  particularly the brilliant and innovative soundtrack. The English composer, and five times Oscar winner, John Barry provided a fine and edgy score, and Schlesinger chose a Fred Neil song to underscore the narrative, the evocative Everybody’s Talkin’, sung by the sweet toned Harry Nilsson. Interestingly, the almost identical I Guess The Lord Must Be in New York City, resulted after Schlesinger asked Harry to write a tune specifically for the film and sent him a cut to view. It transpired that the director was only using the Fred Neil song as a guide, having taken a liking to Harry's Aerial Ballet  album from 1968, and hoped the 'replacement' song, written and sung by Nilsson, would do the job. Ultimately, Schlesinger preferred the 'guide' song and Harry's bespoke tune was rejected, but other songwriters got a leg up, like maverick songwriter Warren Zevon, whose career was kick started with the inclusion of his, He Quit Me.. Bob Dylan was asked to contibute and is alleged to have had Lay Lady Lay  written for the soundtrack, but didn’t get the recording finished in time. Damn.

Midnight Cowboy  may be the most unlikely Best Picture winner, the only ‘X’ rated feature to achieve the honour, even if it is tame by modern standards and has been since downgraded to an ‘R’. Schlesinger continued to mine a rich vein of form for some time, and even worked again with the notoriously demanding Hoffman in the excellent Marathon Man.  Schlesinger mined a rich vein of form for the next few years, producing the acerbic and bold Sunday, Bloody Sunday  back in Blighty, a brave and controversial film that dealt with homosexuality, dare we say it head on, and then the surreal, Hollywood retro of the very fine, Day of the Locusts.

A funny story, probably apocryphal, did the rounds for some time that Roy Rogers was looking for a western to take his wife to for a nice night at the pictures and settled on Midnight Cowboy, only to be disgusted by the film and to walk out stunned. The picture may have lost the power to shock but it’s a testament to the quality of the writing, the acting and the direction that it still demands attention, one of the finest films to dissect the seedy underbelly of mainstream American life. 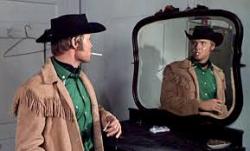 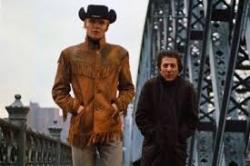 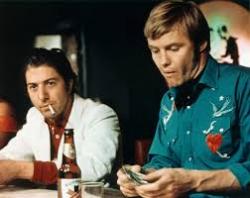 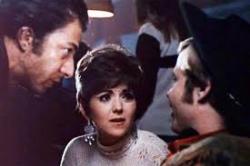 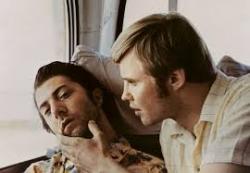