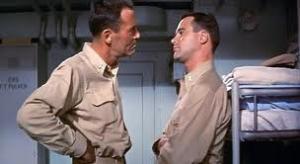 The wreck of the John Ford - disaster in the Pacific

John Ford’s famous misfire in his direction of the stage hit ‘Mister Roberts’ has a fascinating and revealing back-story that explains the uneven finished product, and puts into perspective Ford’s amazing rebound to pull himself out of a very dark hole, professionally speaking, and to produce some of his best work after this disaster. The play was a famous hit on Broadway and a defining role for Henry Fonda, who assumed he’d be too old to be cast in the film, but when Ford was signed on for the directing job he was asked if he wanted Brando or William Holden for the title role, "Bullshit, that’s Fonda’s part"! he yelled. Fonda was overjoyed to be doing a part he knew backwards, and Ford was signed on with his impeccable Navy connections amidst concerns that the Captain character was negatively portraying a military officer, and Ford could ensure that the production would enjoy Navy top brass support.

Ford rounded out the cast with James Cagney to play the Captain, and coaxed William Powell out of retirement to play Doc. The key role of Ensign Pulver was given to newcomer Jack Lemmon who promptly stole the picture and ran off with an Academy award. Trouble started the first day of filming, a difficult and involved scene between Fonda and Powell was printed to Ford’s satisfaction, but both actors were unhappy for different reasons. The nub of the dispute was Fonda knew the play intimately, the timing was second nature to him, and he knew Ford’s approach was not up to the stage standard. According to Josh Logan, who directed the stage version and wanted to do the film, Ford had dismissed the Broadway production, "why should I see that homosexual play"? was his put down whenever he was invited. Ford meddled with the tone of the piece, making Cagney’s part more broadly comic than vicious, reminiscent of the bluster found in the earlier Ford and Cagney film ‘What Price Glory’? Fonda felt the approach threw the piece out of balance and on the first day they met to discuss the dailies. Ford took exception to Fonda’s criticism and took a swing at Fonda, Ford ended up on his back and later went shamefaced and in tears to Fonda to apologise.

The atmosphere on the set was ruined from that day and the incident sent Ford into a downward spiral, he started drinking during filming, which he had never done before, and was ‘pissed’ in Lemmon’s words while directing. Ford’s habit had been to binge drink between films, preferably on his boat with his friends like John Wayne and Ward Bond. Ford would also check with Fonda after a take, but this only further enraged Fonda, who yelled, "shoot it anyway you like". Ford was hospitalised to dry out, returned to set (with Ward Bond holding the directorial fort!) before needing major surgery to remove his gallbladder, compromised by his serious drinking, and having to be replaced as director with the job half done. Mervyn Le Roy stepped into the brink with no notice and proceeded to shoot the ‘play’, but in doing so allowed a lot of the ensemble to overact further compromising the tone. Warner Brothers were unhappy with the final result and called in Josh Logan to do some re-writing and re-shooting. Ford and Fonda never worked together again, and Fonda a noted liberal who was disgusted by the HUAC era blacklisting finally fell out with reactionary conservative Ward Bond  who took to calling Fonda ‘pinko’.

As for the finished film? Well, Fonda is too old for the part, but he’s absolutely superb in it, his effortless manner and understated playing is a delight, and gives the film it’s heart. Powell is wonderful as the laconic and cynical Doc, and Lemmon sensational as the alternately manic or obsessively lazy Ensign. Cagney is too broad for most of the film, but his scene with Fonda where they negotiate liberty for all the crew is powerful and convincing. Location filming helps, but many of the stage bound scenes are flat and lifeless. A mixed bag is the verdict, but worth seeing certainly, even if Fonda hated the end product, "you can’t tell someone who likes the film they should have seen the play", was his response to the very large box office success the film enjoyed.

‘Mister Roberts’ may not be a ‘John Ford’ film in some ways, he did his usual ‘Irish ego-maniac’ thing and tried to control every aspect of a film he was not in touch with. He may not have enjoyed the negative portrayal of his beloved Navy in the script and thought he could tinker with it and make something else entirely, but in messing with Fonda’s bible he brought down a shit-storm of trouble. His emotional reaction to the criticism that obviously hurt him deeply was telling, he was used to being in control, even if he needed to bully people in public, but he was obviously distraught at what he’d done to Fonda and it nearly destroyed him. The pair never worked together again.

Ford’s career and, given the centrality of work in his existence, even his life was in the balance and incredibly he bounced back with very next film, the immortal ‘The Searchers’, which rose like a phoenix from the ashes of ‘Mister Roberts’. The old bastard had learned a valuable lesson it seems, and if the need to prove his talent and fitness to direct was the only thing he got out of the debacle then that black Pacific cloud had a silver lining. 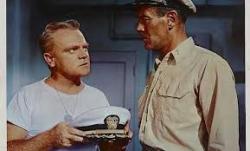 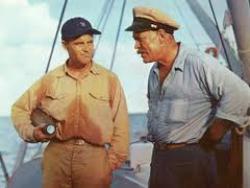 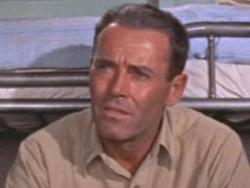