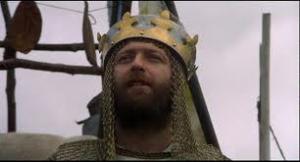 Monty Python and the Holy Grail

"A wonderful thing about true laughter is that it just destroys any kind of system of dividing people". -  John Cleese

One of the more beautiful and enduring myths in English legend is that of King Arthur and his noble knights, called upon by God almighty to dutifully search for the cup Jesus used at the Last Supper, the relic called the 'Holy Grail'. Monty Python pretty much put an end to that nonsense for modern audiences as they skewered that particular sacred cow and hurled it over the battlements. After the success of their anarchic TV show the six members of the troupe put their minds to a narrative feature film, and after agreeing on a medieval tryst based on Arthurian legends (co-director Terry Jones was a buff) the lads wrote their vignette's separately, and for the most part played the roles of the Knights they wrote. The money was half funded through connections made via Charisma Records, their record company, as members of rock groups Led Zeppelin and Pink Floyd invested significant amounts, given the British film industry was sceptical about their capacity to deliver a feature film.

The team starts out by dismantling the title sequence as it descends into a chaotic brew of Swedish travel advertisements, moose gags and endorsements from Richard Nixon. The dramatic score soon takes us to England 932AD, and in the forest through the mist we hear a horseman approaching, only to find King Arthur (Graham Chapman) skipping along with his faithful servant Patsy (Terry Gilliam) hopping close behind banging two cocoanuts together to create the sound of falling hooves. The Pythons said it was this idea that kicked off the agreement that Arthur was a narrative devise they could frame a feature film around. Gilliam also said that the fact they couldn't afford horses also played into the necessity of using their imaginations to solve the problem, "We would never have got through that film with real horses, it makes a wonderful leap because with that opening shot you accept the kind of lunatic logic that's there".  Arthur is putting together his coterie of noble Knights, and after explaining how he became King, arguing the toss over a "farcical aquatic ceremony"  and the lack of an electoral system with the 37 year old Denis, who belongs to an "anarcho-syndicalist collective",  he fights a duel with the ferocious Black Knight (John Cleese) "just a flesh wound"  before he finds his first Knight, Sir Belvedere (Terry Jones). Belvedere is a man of science, applying his enlightened skills to confirm a village woman was in fact a witch for burning, being that she weighed the same as a duck.

Sir Lancelot (John Cleese), Sir Galahad (Michael Palin) and Sir Robin (Eric Idle) join Arthur and ride to Camelot, "it's only a model"  as the group bursts into a song and dance number "We're Knights of the Round table".   The group is stopped in it's tracks by God, who gives them their quest for the Grail, "Good idea O lord"!  yelps Arthur, "Of course it's a good idea",  God shoots back. "And stop averting your eyes, I'm sick of it".  A taunting Frenchman in a castle proves an impediment as regards the Grail, "I told him we've already got one",  as the group goes their separate ways to spread the search. Sir Galahad battles sexy nymphets in the Castle Anthrax, Sir Lancelot raids a wedding in a castle built on a swamp, Sir Robin runs away from danger and Arthur negotiates his way past the Knights of Ni, by presenting them with a shrubbery. The Knights regroup and encounter Tim the Enchanter, who leads them to a dangerous bunny, "That rabbit's dynamite",  before finding the Bridge of Death, and the Castle Aarrgghh. The Knights line up for battle with the Frenchman who make an unwelcome reappearance, an army magically conjured for the fight, but a modern squad car arrives and several policeman stop them in their tracks, arresting them for the murder of an historian earlier in the film.

The playfulness and deconstructionist anarchy of the TV series works it's magic on the big screen, as the lads effortlessly stitch up many social and cultural concepts. The legitimacy of the Royal family, the equity of a system based on a feudal model, the preciousness of 'received' history, the pretension of academia, religion and most all the British class system. The DVD restored some excellent cut material, including Zoot from Anthrax stopping and looking direct to camera and saying, "Are you enjoying this, do you think this scene should have been cut"?  Then characters from later in the film shout at her, "get on with it"!  Jean-Luc Godard would have been proud. The blood and butchery in the Black Knight sketch also looks like a direct reference to (gulp, surely not?) Robert Bresson's take on King Arthur, Lancelot Du Lac,  Mon Dieu, is nothing sacred?! Visually the team opted for a gritty realism in the look of the film, so the peasants are very ragged and filthy, the streets are chaotic mud tracks full of chickens and pigs and this gives the comedy a solid base from which to work. The decision for Graham Chapman to play Arthur as a straight man, oblivious to the comedy and lunacy going on around him also makes the film work on a subliminal level, and Chapman's inherent dignity elevates his centring role and coheres the piece beautifully.

The team laboured long and hard in the editing phase before they were happy to release the film, and in the process created an enervating and rambunctious classic, and also carved out a position in film comedy that has no real equivalent. The Python's unique blend of the cerebral with the absurd moved comedy into territories it had barely touched prior to their cinematic excursions. Appropriately enough they arranged with Apple films for the British theatrical run to have The Beatles 1967 whimsical confection Magical Mystery Tour  play as a support feature. George Harrison became friendly with Palin and Idle as a result and would later take it upon himself to finance their next film, the superb The Life of Brian,  after mainstream companies would not go near it, and to set up his own film company Handmade Films. Monty Python and the Holy Grail  was the first time the team were able to create a narrative frame that held their episodic and collective talents in a way that made the sum of the whole greater than the sum of the parts. That's the optimal outcome for any group effort, and it served them well in the writing and execution of the exploits of a Red Sea pedestrian (who was not the Messiah) called Brian in their next project and their undisputed masterpiece.