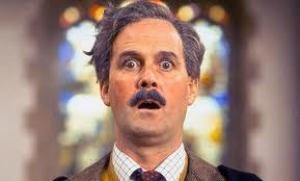 A series of near perfect scores, with pike! (and salmon)

Another bitter social commentary pill washed down by the fizz of Python comedy, who were unable to agree on a single story-line narrative structure a la ‘Life Of Brian’ and so fell back onto their TV series methodology of utilising a series of sketches. The devise works so well because all the components are so brilliantly realised and self-contained as to render the slender connecting thread of ‘seven ages of man’ completely redundant. The film had a much longer gestation period than any other Python project, and even though the motivation was mostly financial at this point, Universal stumping up some $8 million dollars, the team were all justifiably proud of the quality they’d achieved with ‘Brian’ and worked hard on coming up with something suitable. Initially a working premise of ‘Monty Python’s World War III’ was abandoned in favour of separate birth, middle age, old age and death sketches, producing some of the most biting and offensive satire the Python’s ever did.

Terry Gilliam, in the early flower of a significant directorial career created his short film ‘The Crimson Permanent Assurance’ in isolation, the others agreeing it would enter to film about 3/4 of the way through to inject a surreal note, but the agreed 9 minute segment went nearly 20 minutes too long as Gilliam got carried away and went over his budget by more than a million dollars. The solution was an ingenious one where the sequence appears before the main film as a short and then attempts a takeover of the feature at the agreed point. Gilliam’s visual inventiveness adds to the prescient satire on an upcoming era of corporatisation where out of control mega companies pull the financial levers for their own gain and rule the world in a kind of corporatocracy. Universal were so impressed they bankrolled Gilliam’s epic ‘Brazil’ next, but that’s another story. The birth sequence contrasts two deliveries, the first section features a woman giving birth in a state-of-the-art labour ward who asks ‘What do I do’? to Doctors played by John Cleese and Graham Chapman, who reply ‘nothing, you’re not qualified’. The Hospital administrator then delightedly expounds upon the various payment schemes that have delivered the shiny machines that go ‘ping’. A Catholic working class woman then drops her baby while washing dishes ‘Get that will ya Dierdre’, as hubby comes home and informs the very crowded house that as ‘the Pope won’t let me wear one of those little plastic thingies on the end of my John Thomas… I’ll have to sell you all for scientific experiment’. As the sullen children trudge out of the house they burst into a Python musical highlight ‘Every Sperm is Sacred’, easily the match for any sequence in it’s filmic reference point, Lionel Bart’s ‘Oliver’.

Religion gets a roasting next in an upper-class Boys school, the casual brutality of the system made plain by a student being informed at assembly amongst routine pieces of daily business that his mother is dead. The prayers offered by the congregation are hilarious ‘O Lord you are so huge, and we are all very impressed down here I can tell you…’ and the hymn magnificent in it’s tone and content ’don’t roast us in a wok’… Cleese then strolls into class and delivers the most memorable lesson on sex ever filmed. The laughter generated conceals the fact that you’ve just witnessed a complete evisceration of several sacred cows. The British class system, the education system, sexual taboos, formality of married relationships all cop a pie in the face in an elegantly written, beautifully paced vignette. Cleese plays the slightly agitated teacher straight and to great effect, with the situation an inversion of the private school norm, i.e. the lesson is a graphic sex education piece, with Cleese’s ‘good lady wife’ helping out with an actual demonstration, all the while the boys are bored witless. The language is not crude and the nudity discreet, yet it manages to be the most confronting sex scene imaginable. Priceless.

World War 1 comes under scrutiny with a ridiculous sketch involving the division between class at the front line getting in the way of celebrating an Officer’s birthday while having to go over the top and fight ‘Gerry’. The Zulu war gives way to the ‘middle of the film’ and the Python’s outdo each other in the gluttony and death scenes producing the immortal ‘Mr Creosote’ and a deathless comment on over-consumption and a spot -on recreation of Bergman’s scything Angel of Death come down to do some grim reaping over the salmon mousse ‘but I didn’t eat the salmon mousse’! Cleese and Chapman provide another quotable highlight with the ‘liver donor’ segment ‘but I’m using it’, where the amount of blood used would cause Tarantino to blush as Cleese chats up an in-drag Terry Jones about her plans now that her husband is dead. Topped with brilliant songs ’Isn’t it Awfully Nice To Have a Penis’ and ‘The Galaxy Song’ the Python’s finally wind up in Heaven where God is a game show host and Jaws 1, 2 and 3 are on endless repeat. The linking motif of the ‘meaning of life’ is referenced at the end as a frocked up Michael Palin opens and envelope and reads aloud, ’it’s nothing very special, try and be nice to people, avoid eating fat, read a good book every now and then, get some walking in, and try and live together in peace and harmony with people of all creeds and nations’.

Endlessly funny and bold the film gets short shrift when compared to their masterpiece ‘The Life Of Brian’, but the kind of criticism it mostly cops misses the point as this film doesn’t cohere to the same genre rules. If it was presented as a through-line narrative then fair enough, but it’s not, much to Eric Idle’s chagrin it seems, and when you sit back and enjoy the smorgasbord presented it’s very filling and satisfying indeed. More belly laughs per minute than virtually any comparable comedy (and isn’t THAT the point?) plus, ‘it makes you think doesn’t it’? Like a sequence of near perfect scores with a high degree of difficulty we can judge the overall effect to be cumulative rather than comparative and just remind ourselves how good this team was, maybe even an argument for intelligent life down here on earth? 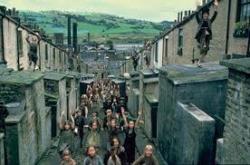 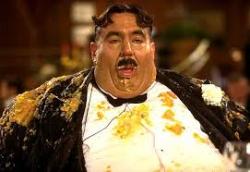