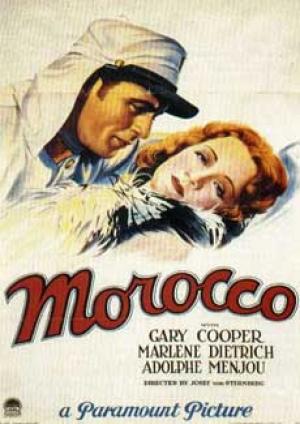 Foreign legion of the heart

If one needed proof that filmic melodrama can be raised to the level of high art then the Marlene Dietrich/Josef Von Sternberg collaborations from the 1930’s would be exhibits numbered 1 through to 7. Von Sternberg, like Ford, Renoir and Carné was one of the great visual poets who emerged from the silent era, deeply schooled in German expressionism. His signature style is a key link in the chain between German film of the 20’s and French poetic realism which emerged a few short years later. Sternberg made gloriously chaotic yet rococo compositions to please his own certified cinematographer’s eye and his mise en scene simply set it’s own agenda and followed no trends.

Seredipity linked Sternberg to Dietrich via Emil Jannings, who had won the first best actor academy award in a 1928 silent film of Von Sternberg’s called Last Command. Jannings went back to Germany to star in The Blue Angel and insisted Jo direct, at which point he set about to find his nightclub siren and cast Dietrich. Paramount lured her to America with a contract and she sent a copy of the play ‘Amy Jolly’ to Jo to read, calling it ‘weak lemonade’, but he obviously thought he could spike it sufficiently and it became their first American film. Even though he was known as an arrogant and autocratic director, long before the auteur theory was formulated, there are still some key collaborators, beside Dietrich, who should be acknowledged that helped ensure the Sternberg vision could be richly realised, not least among them Lee Garmes, who photographed Morocco and Jules Furthman who worked on the script. The same team contributed to Shanghai Express two years later, arguably where Sternberg’s vision reached it’s apogee.

Morocco begins and ends with sex. That is to say it’s bookended by sex deprived soldier’s marching into town from the west African desert, their hungry eyes matched by the local women eyeing them off, and later marching off into the desert, a troupe of women trailing behind. First up we meet the lanky legionnaire Tom Brown (Gary Cooper) deftly signalling his intention while bartering on price with a local girl, as his Sergeant is lecturing the men about sexual behaviour. Contrast this with the devout locals being called to prayer and the divide between the sacred and secular is signalled. It’s clear Brown knows his way about the women and the town, into which nightclub singer Amy Jolly (Marlene Dietrich) sails. Amy has a one way ticket, intending to get lost in the African exotica and forget a past that torments her with lost love and heartbreak. On the voyage she’s spied by a smooth, aristocratic and wealthy artist played by Adolph Menjou, who is immediately smitten with the mysterious Amy. Amy finds work at a seedy club and her first routine is a smash hit. Tom, who helps tame a hostile reception for her is rewarded with a flower from Amy and their affair is in motion, under the gaze of Menjou who is in the audience too.

Brown and Amy are both damaged goods, she intellectually knowing this truth and stating as much to Menjou who pursues her with gentlemanly restraint. Tellingly she maps out her position as someone who’s known and lost passionate love and holds no realistic hope she can find it again. She has beat a retreat to join the ‘foreign legion of women’ who also want unquestioning acceptance of an unbearable past, the same way the soldiers do. She affects a cool air of independence and authority, having both men and, startlingly for the time, women eating out of her hands, but it’s a front to mask the hurt and longing. Menjou offers safety and respectability, but Amy sees in the ladykiller Brown something of her lost love and can’t help but be drawn moth like to his flame. Brown for his part is superficial and empty, but doesn’t seem to understand why, he’s caroused and whored his way through many towns and many more women and is yet to find anything that would give him pause to settle down. He rejects authority and regards officers wives as fair game to break his pervading sense of ennui and discontent. In Amy he has met his fate, realising she’s more than just another diverting temptress and it remains for the melodrama to play out as to how they fall into each others arms.

Sternberg handles the narrative conventionally enough. The usual side stories and sub-plots play out to the inevitable conclusion but the denouement is still breathtaking and quite un-Hollywood. Amy disdains the women who traipse off after the troops each time they leave town on desert patrol, and only after Tom is thought badly wounded is she stung into revealing the depth of her feeling. Menjou indulges her in her quest to find Tom, but he also hopes to win her companionship, knowing she could never love him the way he loves her, On the night of their engagement she sets off to find the wounded Tom, and comes to realise he is indeed in love with her, with a passion to match her own.

Sternberg’s vision is so sure footed that even the slightly dated and mannered pauses can’t deflate it. The art direction is sublime and the sets and framing never looks awkward or out of place. Cooper is fine as Brown who needs only register a kind of lost boy ambiance as it’s Amy who drives the story. Dietrich is well used by Sternberg, who understands her range is limited, that she’s a movie star not an actress, and so builds the mystery and atmosphere as a supporting device to help cover her weaknesses. It’s something that would serve them well in future collaborations. Sternberg and Dietrich pull off the difficult task, that of convincing us she can be so besotted by Brown that she can reject the perfectly reasonable Menjou and throw in her lot with the women she scorned earler and march off into the desert where nothing is certain. L’amour fou? certainment.

The French poetic realists would take some of Von Sternbergs visual tropes and melodramatic set-up’s to new levels in realising a particulary European existentialist or humanist vision, building on the legacy of his visual masterworks and yet paradoxically paving the way for both the emotional neo-realism of the Italians and the shadow world of film noir. 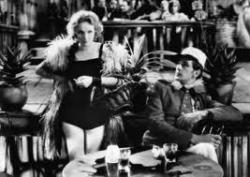 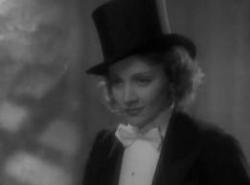 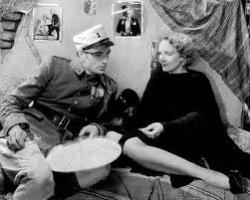 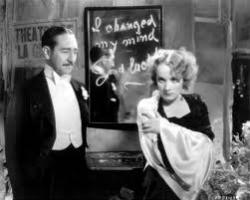 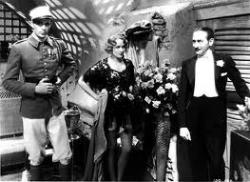