Peter Yates was an English director who enjoyed great success in Hollywood with his energetic cop drama Bullitt,  starring Steve McQueen, a film that revitalised the form and re-wrote the rules about car chase sequences. Yates had risen to prominence after Robbery,  his fictional version of the real life Great Train Robbery, set the tone for his ability to handle big action sequences within strong psychological narratives. After a more intimate two hander with John and Mary  he opted for an adaptation of Max Catto’s novel Murphy’s War,  a tale about an isolated Irishman in Venezuela fighting a lone hand against a German submarine. He cast stage and screen great Peter O’Toole as the lead, and subsequently cast O’Toole’s then wife Siân Phillips as the Doctor. French acting great, Phillipe Noiret, rounds out the group as the barge operator who gets in between the argumentative pair.

A German submarine sinks an Allied merchant boat, the Mount Kyle, and then brutally machine-guns the survivors in the water. One seaman manages to get to shore, and he gets patched up by a lady doctor in a small village on the OrinocoRiver. The seaman, Murphy (Peter O’Toole) decides he will extract revenge on the Germans, and much to the chagrin of Dr Hayden (Siân Phillips) he sets about the task with a vengeance. Murphy enlists the help of Louis (Phillipe Noiret) a local French bargeman, and they retrieve a damaged sea plane and proceed to make it airworthy once more. Murphy puts the peaceful villagers in danger once the Germans are alerted to his presence, and even though the war is virtually over he pursues their demise with demonic passion.

Murphy’s Law is an aphorism that equates to the idea that “everything that can go wrong will go wrong” and the clue to the fate of the zealot Murphy is slyly etched into the title of the film. Isolated and alone, Murphy could easily have sat the rest of the war out, but his sense of justice, and also the need to have a direction to follow gives him something to live for. Murphy is also implied not to be a ‘people’ person, summed up after the salvage of the plane when Louis asks, “You know machines”?  and Murphy replies “I love ‘em”.  Louis subscribes to Murphy’s impossible dream for a time, but after it has cost the lives of villagers and threatens his own, and with the war virtually over, he abandons Murphy to his fate saying “You’re a small and lonely man like me… the difference is I know that”.  The sense that Murphy is striking back for an oppressed and disenfranchised past is also subtly alluded too when the German captain addresses him as Englishman, “You can’t be talkin’ to me”  says the feisty Irishman.

Yates weaves some superb aerial footage into the narrative, and the rollicking maiden flight of Seaman Murphy in the rickety sea plane is a tour de force of editing and style. The opening scenes of the German sinking and strafing of the hapless sailors is also brutally and stunningly rendered, with O’Toole doing his own stunts, as he did for some of the flying footage. The appeal of the story, like Boorman’s Hell in the Pacific,  is that it effectively reduces the macro conflict of WWII into a micro conflict that seems personal and real, and it’s also obvious that even though the wider dispute was essentially a war on fascism, for the colonial outpost it’s effectively an Imperialist war. The Doctor struggles against a futile and ugly situation, desperately trying to keep a modicum of humanity in a place that sinks deeper into a pointless, tit-for-tat madness.

Murphy’s War  is essentially a Peter O’Toole showcase, and a reminder of what a fine actor can do to elevate an underwritten piece. Oscar winner Stirling Silliphant provided the screenplay, but its strength is in the silences as much as what it says, and it allows O’Toole to shine as the beleaguered sailor who has been kicked in the balls by life, and has no other response than to kick back. Murphy is no hero, his endeavour is pure folly, worse it endangers the innocent people whose only crime was to help him, but O’Toole still manages to extract sympathy towards the character whose tragedy is that he must act according to his nature. O’Toole’s wife, the stage actress Siân Phillips offers shining support as the good hearted but aloof Doctor and Noiret is wonderful as the laconic Gaul, the Sancho Panza in Murphy’s quixotic tilt at the submarine, even if he’s dressed in the same costume he will wear in Coup de Torchon  in 1981! Co-incidentally Peter O'Toole made the actual Don Quixote tale the following year, starring in the odd musical version Man of La Mancha.

Peter Yates enjoyed a varied and interesting career but Murphy’s War proved to be out of sync with the tenor of the early ‘70’s and did not do well with the public. He soon turned that around with the brilliant The Friends of Eddie Coyle,  and provided great entertainment with the sweet comedy of Breaking Away  and the English theatrical camp of The Dresser.  Murphy’s War  is a solid and engaging anti-war piece, and as much as the hipper M*A*S*H  and Catch 22  it is an indictment of the utter stupidity of war as a solution to conflict, the fact that it came to be considered as a muddled update of The African Queen  didn’t help its cause. It is a deeper and more psychologically driven film than Huston’s effervescent (movie) star vehicle.

* Peter O’Toole passed away the day before I re-watched the film in his honour, as it’s always been one of my quirky favourites, (another is Rogue Male) and has tended to be overlooked in light of his well known roles. Any film with a top shelf O’Toole performance like this one is one worth the price of admission alone, so Vale Peter, now a part of the silver screen firmament for the ages, and thanks for the memories. 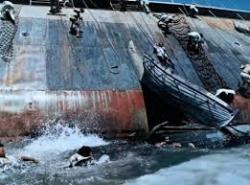 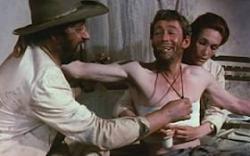 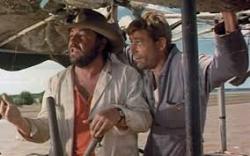 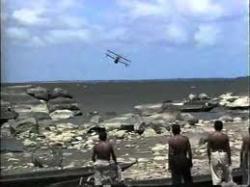 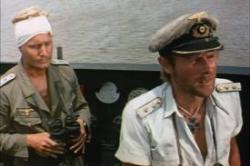