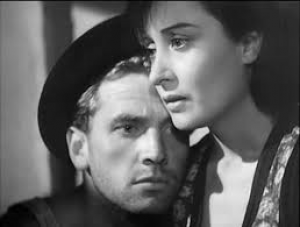 A genre is born

"I like melodrama because it is situated just at the meeting point between life and theatre."
Luchino Visconti

Luchino Visconti made his directorial debut with the unlikely (and illegal) adaptation of James M. Cain’s novel The Postman Always Rings Twice, a copy of which he was famously given by French legend Jean Renoir. The aristocratic Visconti, an Italian count, had served as an assistant on Renoir’s Toni and Partie de Campagne in the mid 1930s, at the behest of family friend Coco Chanel, and embraced the realism and earthiness Renoir uncovered, applying that aesthetic to his own work and helping to create Neo-realism in the process. In 1942, together with fellow communist party members, he wrote the screenplay for the murder pact themed property during the fascist regime of Benito Mussolini, and produced the film under the aegis of Mussolini’s son Vittorio, who was running the state sponsored film company. Visconti had originally wanted to adapt a Giovanni Verga novel, but was denied the opportunity by the fascist censors, having to wait some 5 years before he got the chance with La terra trema.

Gino, (Massimo Girotti) is a tramp who wanders into a roadhouse and immediately is smitten by the woman in the kitchen, Giovanna (Clara Calamai), the wife of the owner. She flirts with him and he determines to stay on under the pretence of working off a debt the lying wife says he owes. The owner Bregana (Juan De Landa), fails to see the attraction between the pair and encourages Gino to continue working at the roadhouse, but Gino feels the lure of the highway, and convinces Giovanna to sneak away with him. Giovanna gets cold feet, returning to Bregana before he even realises she’s gone, and Gino cuts his loses and hits the road. Gino strikes up a friendship with a fellow vagabond, Spanolo (Elio Marcuzzo), and the pair live rough but happy as street market workers. A chance encounter with Mr and Mrs Bregana gives Gino and Giovanna a second opportunity to ignite their affair and to take care of Bregana once and for all.

The aristocratic and wealthy Visconti may have been an unlikely champion of the working class, but his sympathies in Ossessione are clearly with those of the ‘lower depths’, as he displays a rare empathy in showing the travails of the dispossessed. A key tenet of Neo-realism involves using actual locations and non actors, evincing a more documentary type result, and to focus on the ‘real’ people, or poor and marginalised, and in this area Visconti nails his Neorealsimo colours to the mast.  Renoir’s influence is obvious and his effortless embrace of the humanity of the working class in Toni is replicated by Visconti here, showing the teeming street life and simple pleasures of the lumpenproletariat. Neo-realism, whilst it may be partly a philosophical position, was also born out of necessity, i.e. lack of resources and funds to make a ‘studio’ product. Neo-realism is simply the intersection of art, documentary, inventive graft and fiction.

Fellini himself once said of the genre, “Neo-realism is not about what you show, but how you show it. It’s simply a way of looking at the world without preconceptions or prejudices. Some people are still convinced that neo-realism should only be used to show a particular type of reality – social reality to be exact. But then it becomes propaganda.” Visconti was working in an environment when the Fascist ruling class knew something about propaganda and in effect by merely showing the working class, in all their squalour and struggle, in that context constituted a revolutionary act.

Visconti, a nobleman Fascist turned lifelong Marxist, lined up with the left against the fascists in WWII, apparently after being influenced by Renoir’s Populist Front comrades and subsequently ran foul of the Church, the State and the censors, resulting in Ossessione being banned in Italy as immoral and subversive. Audiences were more accustomed to the lightweight, so called ‘white telephone’ films, escapist drivel served up by the entertainment establishment, than the dour and realistic morality play Visconti concocted, and he managed to outrage almost everybody. Oddly for a film where the central tenet is summed up by Gino’s portentous words, “One pays for one’s action”, the moral imperative sees evil punished. In heavily catholic Italy it’s also surprising that a film featuring layers of guilt, the eventual weight of which undoes the couple, should not have found favour, but the Church condemned it as immoral and most of the prints were destroyed by the government. It’s only that Visconti managed to secretly spirit away a print that the works ultimate survival was subsequently ensured. Visconti himself was soon thrown in gaol for organising resistance during the war and was eventually liberated by American soldiers.

Artistically, Ossessione has as much in common with Renoir’s La Bête Humaine as it does with the realist Toni, similarly focusing on a poisonous three-sided relationship. In later life Visconti mastered the heightened melodrama inherent in such trysts, but here he concentrates on showing the action in a neutral tone, avoiding the poetic dimension found in the best French poetic realist genre, but keeping the fatalism inherent in that form. Visconti also displayed a staggering mastery of cinematic technique on debut, with Ossessione making brilliant use of moving camera, crane shots and a devastating use of close-up. The opening reveal of Gino, as he walks into the roadhouse and spies Giovanni is bravura cinema from the get go, and the confidence the first time director had in holding his fire in using close up to accent his choice is revealing of a master-in-waiting.

Visconti cast professional actors in the lead roles, a departure from purist Neo-realism technique, but extracted committed and realistic performances several years before Americans became enthralled with the ‘method’.  Massimo Girotti plays Gino as a man in a trance for much of the action, his stillness reminiscent of the future ‘models’ that Bresson preferred. Clara Calamai, who took the role after Anna Magnani dropped out, played against the glamourous types she was known for and delivered a superb characterisation of a frustrated, sexual woman driven to an impulsive and evil act in the name of obsession. The sexual frankness of the dialogue also stuns, even at this distance, Giovanna’s opening summation of Gino, “you’re built like a stallion”, setting the tone. The openly homosexual Visconti also managed to introduce a startlingly sexually ambiguous character in The Spaniard, the unmistakable latent homo eroticism in his time with Gino no doubt adding to the Church’s outrage. It is also the films main point of diversion from Cain’s novel, where no such character exists.

Visconti survived the war, embraced the world wide phenomenon that Neo-realism engendered by producing one of its best examples in La terra trema, before he turned his gaze onto his natural milieu, the upper class, in classics like The Leopard and The Damned. Visconti roamed across many art forms, making key contributions in both theatre and opera, but his reputation as a founding father of Neo-realism is not in dispute, and his entries remain the finest of the form. Ossessione is a remarkable and brilliant piece of cinema, given the difficulties of the time and the place it was made it’s something of a miracle it exists at all.

*If Visconti beat Hollywood to the punch, it seems the French beat them all in 1939 with Le Dernier Tournant, directed by Pierre Chenal, written by Charles Spaak no less and with Michel Simon!  Someone please restore and release this film!! (Criterion, I'm looking at you!) 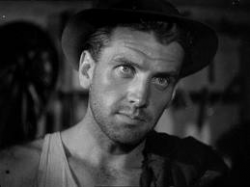 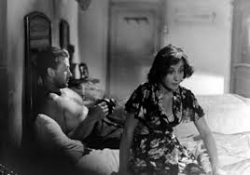 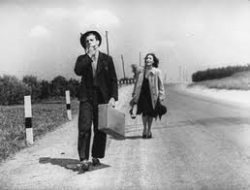 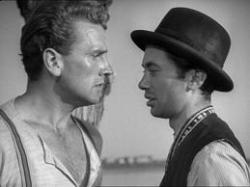 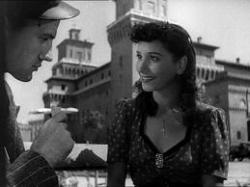 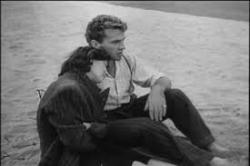 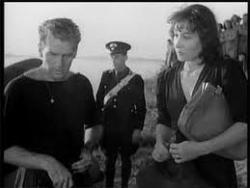