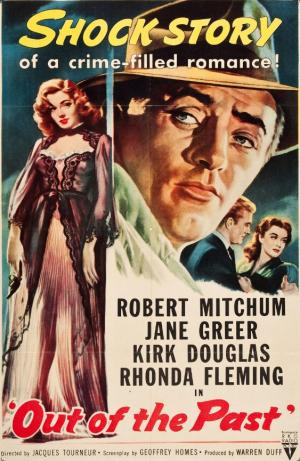 Out of the Past

'The past is a foreign country'...

The world of Film Noir exists as a kind of alternate reality, a shadow-dream landscape where fate dictates the next move and nothing can be done but to delay the inevitable. Its antecedents are to be found equally in the compact melodrama of 1930s American gangster genre, visually in some German Expressionism or the fatalism of French Poetic Realism, and in the endless pulp detective stories that were so popular at the time. Bookended somewhere between 1941's The Maltese Falcon and 1958's Touch Of Evil, Noir worked the dark end of the street, and no finer example exists than Jacques Tourneur’s Out Of The Past. Tourneur, a French emigree, had graduated from Val Lewton's low budget horror unit to become a true artist at RKO and after the war expanded his repertoire to produce some exemplary work, the peak of which is undoubtedly this genre topping gem.

The soon-to-be iconic Robert Mitchum was cast in the lead, after Bogart attempted to get Warner’s to buy the rights to no avail and John Garfield and Dick Powell turned it down. After some years of playing bit parts and with a few key supports (Story Of GI Joe) 1947 was the year Mitchum broke through to stardom, with this film and also Dmytryk’s Crossfire and Raoul Walsh’s Pursued. He was always confident it would happen for him apparently, telling his early girlfriends to "stick with me kid and you’ll be farting through silk". RKO, the little miracle of a studio, stood by Mitchum, even through his drug charges which put him in prison for 2 months, sensing that here was a charismatic star to hang on to. Ironically RKO probably has more of its output critically lauded these days than it ever did at the time, but it's a fact that many of its products have dated much better than the other major studios. It may be the case that the 'personal' filmmakers that could not get work for the 'mainstream' majors and were happy to turn out product for RKO that went under the radar, it satisfied an audience and still managed to push the envelope at the same time.

The location for the opening is anti-noir, a small California town in brightest day, but immediately the ‘man in black’ drives in and the metaphorical darkness starts to descend. The thug is on a mission from Whit Sterling (Kirk Douglas) to find Jeff Bailey (Mitchum) and bring him back to square some unfinished business. Jeff has found respectability as a local Gas station owner and a pure-hearted girl to love him, but the invitation is one he can’t refuse, indeed it’s one he knew would eventually arrive. He drives up with Anne (Virginia Huston) to Whit’s Lake Tahoe mansion and in a flashback we learn of the messy business that has seen his dark past collide with his sunny present. Jeff was a private detective who, with his ineffectual partner Fisher (Steve Brodie) is listening to the detail of an incident where Whit was shot and robbed of $40,000, the kicker being it was Whit’s girlfriend Kathie (Jane Greer) who did the deed. Jeff tracks her to Acapulco, his job to bring her back to Whit, who doesn’t want vengeance, he wants her back, he says ‘once you see her you’ll understand’. Jeff sees her, and he understands.

One theme that runs through a situation like this, not exclusive to noir, is the helplessness of the alpha male in the face of the femme fatale, the roots of the dilemma not only being biological but steeped in a Judeo-Christian moral framework. Western theology was based on a demonising of the power women held over men, inducing them to base pursuits of the flesh instead of the higher, more ‘godly’ pursuits. Kathie is first seen by Jeff almost as an ecstatic vision, a goddess surrounded by light, coming ‘out of the sun’, at that moment every moral framework he had is shot to bits, culminating with his comment after she declares she didn’t take the money, "Baby, I don’t care". Jeff is undone and every bit as helpless as Whit was in the face of a scheming, beautiful woman, his code that defined his tough guy world has no answer to her power while his blood is up, it will take some serious cooling to give him a chance to recover his true self, this is at the heart of the dilemma. The pure Anne, sexless and virginal is the ‘ideal’ or ‘madonna’ type whose love will absolve the memory of the ‘whore’ Kathie and redeem Jeff.

Whit arrives to check on the progress of the investigation, but Jeff, now in love with Kathie stalls him successfully and he and Kathie disappear to San Francisco together to start a new life. Fisher has figured out the set up and breaks in on Jeff’s arrangement wanting part of the $40,000. Kathie shoots Fisher and leaves Jeff alone, disappearing once again. Jeff moves on with his life forgetting her,‘everyone forgets’ he once said to her about Whit, but he knew it was a lie. Flashback over he arrives at Whit’s to discover Kathie returned to Whit after shooting Fisher. Jeff will be in the frame for murder unless he carries out another job for Whit, and the twists continue until Jeff is betrayed by Kathie once more, Jeff saying to her "You’re no good and neither am I. we deserve each other". Anne opines on Kathie, "she can’t be all bad", Jeff replies "She comes the closest". Jeff arranges for Kathie to meet her fate in suitably gruesome circumstances and then knowing he can’t give Anne the respectability and pure love she needs he disappears, ensuring her opinion of him is compromised in the process so she can forget the past, where he never could, doomed to be haunted by his until the end.

Jacques Tourneur, one imagines well versed in French Catholic tropes has at one point Kathie appear as a de facto nun at the end of the film, head covered and poised like some avenging sister superior, the resonance subtle but unmistakable and we are again unsure of the moral terrain. Part of Film Noir’s appeal is the ambiguity of the characters and Out Of The Past is the exemplar in this, as we’re never sure of the depth of love of Kathie or of Jeff at the end. Are they acting out of compulsion or duplicity, cursed by an attachment that can’t be understood at a logical level, but only dealt with emotionally and urgently? Mitchum was the embodiment of the sure footed, quick witted, taciturn and intelligent Noir ‘hero’, and it’s this substrate that allows the overtones of tragedy to play out so effectively, if a man like this has no chance when confronted with the uber-femme fatale Kathie, what does that mean for the rest of us? Greer, at the time the 22 year old girlfriend of Howard Hughes was never to reach the same heights, but here she is perfect and convincing. Douglas, all coiled menace and teeth leapt to stardom shortly after, this was only his second film. Out Of The Past was overlooked for many years, but time has been kinder to this than many other big films of the time and in retrospect it can be seen as one of the prime achievements of post WW2 American cinema and one of the best in all Film Noir. 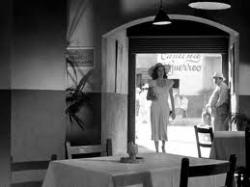 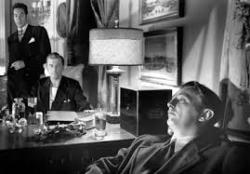 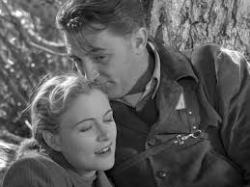 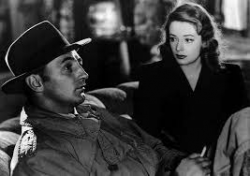 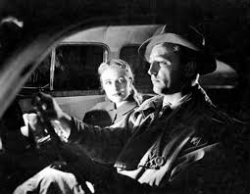 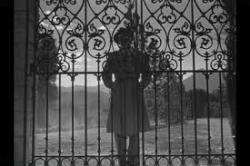