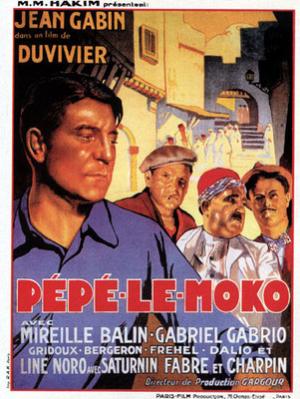 “I know it is much easier to make films that are poetic, sweet, charming, and beautifully photographed, but my nature pushes me towards harsh, dark and bitter material”
~ Julien Duvivier

An influential and seminal film, from an extremely fertile period in French cinema now bracketed under the catch all umbrella of Poetic Realism. Pépé le Moko may be the greatest example of the gangster-noir variant of Poetic Realism, which is to say I’ve just invented that subset and granted the first award, I remain to be proven wrong. It’s influence was great, try to imagine a world without Bogart’s Rick Blaine, or the uber-romantic cartoon skunk  Pépé le Pew - mon chere, would not life be a lesser thing? Julien Duvivier worked shadows like Josef Von Sternberg, creating a Casbah of the mind, studio bound but ultimately unrestrained by any limitations. This is existential noir, where cages made of shadow are just as containing as any with steel bars.

The central relationship of the Casablanca-esque rogue villain and ironic cop type. Like Rick and Louie, Pépé (Jean Gabin) and the police inspector Slimane (Lucas Gridoux) are soul mates on opposite sides of the law divide. Respect and a certain kind of male love is apparent in a symbiotic link between the two couples. In Casablanca it ends with bonhomie and camaraderie as the lines dissolve…. there is no such light in the dark alleys of the Casbah and its dockside conclusion. Pépé is the lord of all he surveys and the dominant animal in the labyrinthine shadowland of the Algerian alleys, but the arrival of Parisian dilettante Gaby, (Mireille Balin) keen to do some slumming for the excitement,sees her attracted to bad boy Pépé and they connect over reminiscences of the Paris Pépé behind. Pépé begins to long for the streets of his youth, overwhelmed by a nostalgia and yearning that he does not fully understand, thereby sowing the seeds of his own downfall. Familiar gangster tropes of betrayal and duplicity, scorned women and scarred hearts populate Pépés world, and soon he yearns for a different kind of freedom, one that is shared fully with a missing part of him, found in a woman he can truly be himself with, no more games, no more 'Pépé le Moko.'

Gabin was on a golden streak, one iconic role after another, and this is up there with the best. He is a caged animal, but even the king of the cage wearies of it golden bars in time. This is the one fact that Slimane knows will bring Pépé's demise, all he needs is a powerful enough lure, and it arrives, of course, in the shape of a woman.  Ilsa was the impossible love for Rick and here too Gaby is the idealised temptress, a window to another world for Pépé or maybe another cage? There is a sadness in Slimane, who knows that the only destiny that can await Pépé has been hastened upon him by his political masters. The regret hangs like a pall over the machinations that ensue, but somehow we feel too that only death can be the ultimate escape for Pépé and like Slimane, we don’t really want to see it.

Duvivier made a genre defining film with this one, and given the dearth of availability of his 1930s work, he would seem ripe for rediscovery. Hollywood knew quality when it saw it, and made a fair fist of a remake with Algiers, starring Charles Boyer and a luminous Hedy Lamarr. Both Duvivier and Gabin ended up in Hollywood during the war and neither did particularly well, and they made made the odd English language war film The Impostor in 1944, a misfire on most counts. Both returned to France where Gabin rose to legend status and Duvivier continued to run his own race, eventually falling foul of the taste fascists of the Nouvelle Vague, tres ironic.

I suspect (or like to think) that Bogart saw Pepe in the 5 years between its release and his turn as Rick Blaine, and hopefully he would have poured Gabin a drink had they ever met. Here’s looking at you Jean. A timeless gem. 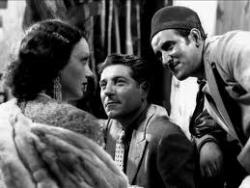 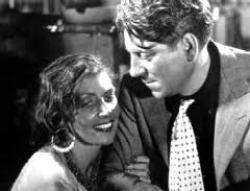 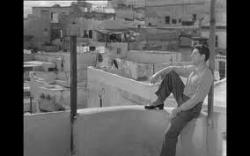