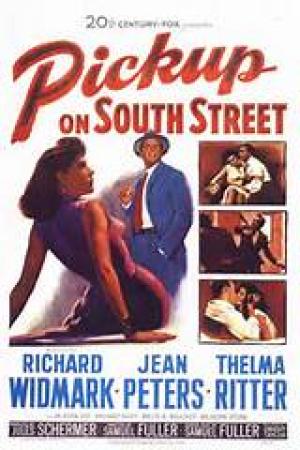 "Being a hooker does not mean being evil. The same with a pick-pocket, or even a thief. You do what you do out of necessity."
~ Sam Fuller

Sam Fuller was a misfit who found himself in Hollywood in the late 1930’s writing unsuccessful screenplays, after starting as a crime reporter in New York as a 17 year old. Like many of his generation whose life was changed irrevocably by WWII he saw action as an infantryman in Europe and returned intent on telling stories with a level of realism and bite. Sam became frustrated by the treatment his screenplay for Shockproof,  a film noir  directed by German émigré Douglas Sirk in 1949 and took to directing his own stories. After a couple of low budget independent features Fuller made a success out of his Korean war feature, The Steel Helmet,  which led to a long term contract with Daryl F. Zanuck at Fox and became a key figure in the history of Film Noir  with superior efforts like Pickup on South Street.

Skip McCoy (Richard Widmark) a pickpocket fresh out of the slammer saunters onto a subway train in New York and casually picks the handbag of a pretty woman named Candy (Jean Peters). Unbeknownst to Skip she is being watched by the Feds, who follow her to her rendezvous, where she fails to deliver the package they suspected she possessed. Both the criminal conspirators and the cops soon put two and two together and go looking for Skip, who has seemingly unwittingly pocketed a dangerous formula worth a lot of money to communist agents. Candy tracks Skip down, but starts to develop feelings for him and this compromises her promise to return the stolen microfilm.

Zanuck had offered Fuller another crime themed script but the new recruit preferred to concoct his own story of a small time crook, based on some of his recollections of places and types he’d met whilst he was a tyro reporter in New York. What makes this film memorable are the deft touches, such as the waterfront locale where Skip lives off the grid, the pragmatism of the old snitch Moe (Thelma Ritter) and lack of sensationalising of the commie menace element. Also, the lack of sentiment in the ultimate fate of the old lady sets the film apart from the majority of its American contemporaries, exemplified by her stark response to the threat at the barrel of a gun, “I’m so tired… you’d be doing me a big favour,”  - it’s hard to imagine such a bleak, fatalistic line in white bread, Eisenhower America.

Fuller tapped in to the rampant paranoia that had engulfed America in the Cold war era, specifically the communist witch hunt mentality of HUAC and its publicity stunt in holding hearings into Hollywood figures. He makes a neat point on moral relativism, the war and patriotism when the police entreat Skip to not sell the microfilm to the Reds, to which Skip replies, “Are you waving the flag at me”?  Skip is not fazed by the colour of the money, telling Candy “You’re a Red, so what? Your money is as good as anyone else’s.”   The flag line caused J. Edgar Hoover to visit Zanuck to complain, at which point Zanuck reduced the level of emphasis on the agency in the promotion of the film, but crucially kept the line.

Fuller was a WWII veteran who had witnessed the struggle for the returning veterans and their difficulty in stepping back into civilian life, a situation hinted at but not lingered on in the terse screenplay. The scenario is more of a morality play, and Fuller has Skip eschew one set of ‘patriotic’ values for another, goaded in to action once Candy is beaten badly after refusing to sell Skip out to the commies. Ironically, Moe the snitch sets the challenge, in regards to taking money off Reds, telling Skip, “Even in our crummy business you gotta draw the line somewhere.”   Skip can rationalise Moe’s selling him out for money, but can’t stomach the violence committed on Candy, so in his universe of moral relativity we get the idea that he’s seen enough ‘flag sanctioned’ damage and violence in the war and has therefore decided the only code worth a damn is one based on a person to person relationship, one where you fight for your friends.

Working for the bigger studio afforded Fuller the luxury of signing A-list actors and crew, and Pick up on South Street benefits from fine performances and great camerawork from ace cinematographer Joseph MacDonald. MacDonald’s work had graced a number of fine films, notably Ford’s My Darling Clementine,  and he would become one of the key technicians in all of Film Noir  with a CV second to none. The conceit of the Fuller film is that it was mostly shot on a sound stage, and yet it feels like it was shot on location, a visual sleight of hand by talented artists. MacDonald had worked with Widmark prior, on Elia Kazan’s brilliant location noir, Panic in the Streets,  shot on the streets of New Orleans in 1950 and also worked with Fuller again, on the war-noir, House of Bamboo  starring Robert Ryan and Hell and High Water,  again with Widmark in the lead.

Fuller gets great work from Richard Widmark, one of the under-rated figures of the time, a non fussy actor who gets to the meat of any part without artifice of fakery. Widmark made a splash as edgy, psychotic villains mostly, but here he finds some dignity in the misfit Skip, an almost sympathetic pickpocket who refuses to play by the set of rules society demands. Jean Peters (a future Mrs Howard Hughes) is fine as Candy, the kindred spirit, a fallen woman who sees Skip as her shot at redemption, we are in no doubt from the get go that although she is intent on ‘saving’ him, she is in all actuality, saving herself. Fuller picked Peters ahead of another young Fox starlet, Marilyn Monroe, whom he thought “too innocent”  for the role of the conflicted prostitute. The actor who steals the show is the remarkable Thelma Ritter, who was nominated for a Best Supporting Actress Oscar for her role as the pragmatic Moe, who merely sees her services as an essential part of an economy, not batting an eyelid when the cops question her new price list for information, “It’s the cost of living”, she deadpans, capitalism at work indeed.

Sam Fuller’s exclamatory mantra was that cinema should be “visual emotion”  and Pickup on South Street  more than fills the ticket. Fuller was one of the post war directors who embraced a ‘pulp’ aesthetic, a nod to his days as an urban journalist, imbuing his work with an urgency and directness that could encompass both realism and hyper-realism, even melodrama in the case of some of his later work, like the remarkable western Forty Guns.  Fuller was the ideal director for Widmark, an actor not afraid to play a flawed or un-likeable character, and the pair make a great team on this gritty noir, which was a success on release but has garnered a bigger and richly deserved critical reputation as the years have passed. 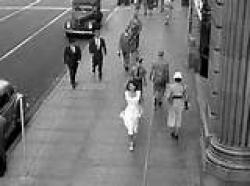 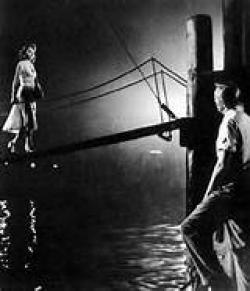 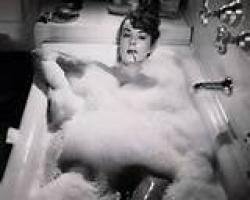 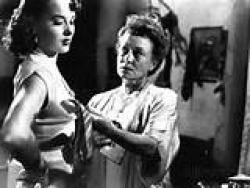 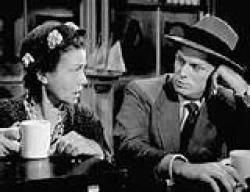