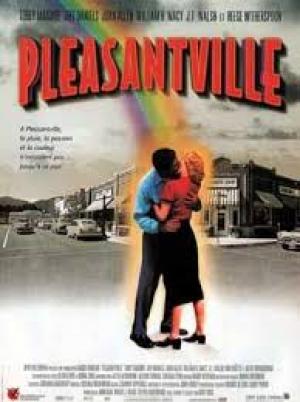 In 2018, it seems Donald Trump’s ideal America might well be the fictional, blissful and anodyne 1950’s sitcom town of Pleasantville, the centre of Gary Ross’s delicious conceit in the 1998 movie of the same name. The troubling ideas of conformity to a single, hierarchically imposed identity and the notion that the inevitability of change can be resisted is at the heart of this gentle and witty satire, a timeless refutation of bigotry in all its forms. The film is anchored by a note perfect performance from the young Tobey Maguire, with fine support from Joan Allen, Jeff Daniels and William H. Macy.

High school student David (Tobey Maguire) escapes the pace and stress of his modern world by escaping into the untroubled times of Eisenhower America and the white picketed dream world of Pleasantville, a family sitcom from 1958. David’s twin sister Jennifer (Reece Witherspoon) gives as good as she gets in her modern world, focusing on manipulating boys with her sexual allure rather than study, content to win popularity in a dog-eat-dog world. A mysterious TV repair man (Don Knotts) appears and gives an unsuspecting David a key to entering Pleasantville, but Jennifer gets caught up in the process and the late 1990’s teens get stranded in a 1950’s sitcom. David and Jennifer are now Bud and Mary Lou, and try to fit in to their new environment until David can work a way to return to their world. The rawness that Jennifer injects into Pleasantville has unexpected consequences as an unstoppable momentum for change envelops the wholesome community, suddenly made aware of how stifled the life they have is and curious for new experiences.

The surface level attractiveness of life in a ‘perfect’ town is neatly presented by Ross, it never rains, there are no fires for the fireman to put out and the basketball team (boys only of course), never misses a shot, the women are subservient and the food is plentiful. The introduction of knowledge, in the form of David, and unruliness, in the form of Jennifer (the agent of change), slowly unravels all the certainty of white-bread, conformist heartland America. Ross contrasts pop culture and high art by incorporating the work of Kandinsky, Braque, Picasso and Monet, as well as literature that had been banned in reality in America, by Mark Twain, J.D. Salinger and D.H. Lawrence. The device offers a way to explore the emotional richness of the ‘forbidden’ work and it serves to counterpoint the lack of depth and diversity in the local culture.

One of the likely spurs to make a film like Pleasantville was the Hollywood Blacklist, as Gary Ross was the son of Arthur Ross, an Oscar nominated screenwriter (Stuart Rosenberg’s Brubaker), and a writer who was Blacklisted during the McCarty era. It may be not too much of a stretch to imagine Ross seeing his father’s situation mirrored in the Kangaroo court set up by the town elders, middle aged white men all. Bud is called upon to ‘name names’, to reveal the fellow travellers who want to change the status quo in scenes reminiscent of the star chamber qualities of HUAC in the early ‘50s. It also serves to remind us that the Cold War paranoia that infected the real America was mostly ignored or absent on the small screen fantasies of Leave It To Beaver, The Adventures of Ozzie and Harriet or My Three Sons. American Network TV in that era created escapism, not reality, that came (sort of) 40 years later, and Pleasantville is not meant to be an approximation of real life, small town America, nor indeed a neat Xerox of the shows of the time, it exists to provide a framework for Ross’ affirmation of a philosophy embracing passion and denouncing sterility.

The 1950’s were a paradox, repressive and revolutionary at the same time, and the sexual counter-culture of the next decade had seeds planted by the rock and roll era where white music and ‘race’ music met head on. WWII had led to an inevitable freeing up of old strictures, where ‘live and let live for we may die tomorrow’ became all too real and it should have been no surprise that the post-war consumer boom in the US led to a focus on temporal, material things and conspicuous consumption. This grated against America’s deeply imbedded puritanical streak, creating a situation where the country that invented rock and roll could also denounce it as ‘the Devil’s music.’ The liberating qualities of this libidinous and rhythmic music created a watered-down, safer version for the consumption of decent folk – go no further than Pat Boone and his asinine take on Little Richard’s hits. Pleasantville is the TV equivalent of Pat Boone and it is Jennifer who brings the Little Richard to town, a town devoid of ‘coloured’ people. David had fallen for the fantasy of Pleasantville in his own era, finding in it a way to yearn for simpler things, for a gentler time, but his journey to Pleasantville forces him to come to terms with its limitations, and to manage the transition that new ideas provoke.

Religion is not an overt target for Ross’ satire, but being America it can’t help but be present. The obvious Adam and Eve metaphor is played tongue-in-cheek, and as far as establishment institutions the character of the Mayor (J.T. Walsh) is as much fire and brimstone preacher as town administrator, so adding a member of the priestly class is redundant. The beneficiaries of the status quo are anxious to keep out the ‘coloureds’ and push back hard against change. The sexism endemic in the system is challenged by Betty (Joan Allen) whose world is turned upside down by the discovery of the passions she’d subsumed to her husband and children. She flowers into colour (another obvious but appropriate metaphor) and shares the experience with Bill (Jeff Daniels), the frustrated burger jockey who blossoms when he opens up his artistic side. A clue to the struggle is revealed by the use of a painting, The Expulsion from The Garden of Eden by 15th Century Italian master Masaccio, and reincorporated by the picking of the apple at Lover’s Lane by Bud’s girlfriend Margaret, who then offers the apple to Bud.

Jennifer learns the value of restraint and David learns something about the value of suffering as much as he enables change and teaches the residents to embrace passion and curiosity. Pleasantville might have been David’s idea of heaven, but he finds living in it not all it’s cracked up to be. As Christopher Hitchens said of the Christian idea of heaven, if you want a sneek-peek, go to North Korea, there fawning and unquestioning obedience to an all-powerful leader is a day to day occurrence.

Gary Ross wrote and directed a satire with heart, which is why the piece is so effective, Pleasantville is no abject rejection of the monoculture 1950’s, merely an appreciation of its limits and of the limits of nostalgia for its own sake. The devices Ross employs are nicely realised, not overused or obscure, this is a mainstream film after all, and the central idea that a life in colour is a full life is clever enough to sustain for the duration. Charming. 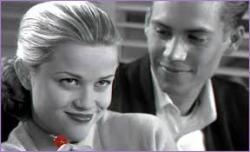 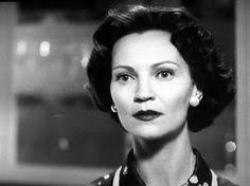