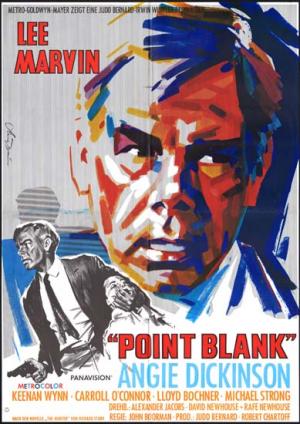 'I think most films are too predictable. They follow familiar patterns. I suppose audiences like to know where they stand but I like films that take me by surprise, take unexpected turns and twists.' ~ John Boorman

Hard boiled to the point of granite, this Lee Marvin vehicle sees British director John Boorman use him in ways that ramp up the testosterone and add a dose of existential fatalism for good measure. Boorman's second feature film, the first being the 1965 and of-its-time Catch Us If You Can with the pop group The Dave Clark Five, is a visceral dissertation on alienation and the displacement of pain, the act of betrayal at its core leading Marvin's protagonist to invest all his focus on the $93k he's owed, a metaphor for what he's lost and a quest for something he needs to regain. Marvin was at his peak as a movie star at the time, coming off an Oscar as Best Actor for Cat Ballou, and ceded all his clout to Boorman who had to fight the mainstream MGM for the bold stylistic choices he was intent on making, but as he had final cut via Marvin he was able to construct a remarkable and exhilarating neo-noir.

Walker (Lee Marvin) is a criminal, he connects with an old friend Reese (John Vernon) and the two plan a heist of a regular mob-front drop made on Alcatraz. The pair successfully carry out the heist with Walker's wife Lynne (Sharon Acker) along when suddenly Reese shoots Walker in the back and Reece and the wife leave him to die. Some time later an un-dead Walker is on a boat off Alcatraz, listening to a shady businessman (Keenan Wynn) outline a scheme that helps eliminate some mob competition and enables Walker to get his share of the loot, the almost mythic $93k. Images of his fractured past whirl around Walker's head, and we see he survived to make it off Alcatraz, despite the tour boat operator intoning the impossibility of such an act. In a bravura sequence from Boorman, Walker goes to L.A and with the insistent and metronomic accompaniment of his own footsteps as the ominous soundtrack he crashes into the apartment of his wife, grabs her and proceeds to shoot up an empty bed. His wife is a drug-addled shell of the woman he knew, she's consumed by guilt over her betrayal of Walker for Reese, and only gets by with money Reese sends her once a month. In flashbacks we are treated to scenes of the happy threesome, 'with him it was kinda fun' Lynne says by way of explanation of her gravitating to Reese, and tacit is the thought that Walker is a serious individual. 'Is it good being dead'? she asks from her near catatonic state, but Walker is as silent as the grave, and she obliges by overdosing in the night, Walker finds her body and merely removes his own wedding ring to put on the corpse bride.

Following a lead to find Reese, he monsters a used car dealer in a memorable scene where he totals a car, and then tracks down his wife's sister Chris (Angie Dickinson) in the hope of finding Reese there. Chris admits Reese has tried to see her, but she was not interested, implying that it was Walker all along she was keen on 'you always were the best thing about Lynne'. Reese is worried Walker is on his trail and sees an 'organisation' big-shot, Carter (Lloyd Bochner) to see what can be done. Chris agrees to help Walker get to Reese in his otherwise impregnable penthouse, and she arranges to visit for a romantic evening, opening the penthouse door from within for walker to enter through. Walker creates a diversion outside the building and enters but not before Reese has Chris in bed, Walker interrupts the coupling and ends up hurling a terrified Reese off the penthouse roof. Walker then sets his sights on Carter, 'somebody has to pay', and infiltrates his inner sanctum, only to have Carter double cross him at the money drop. Chris can't get close to Walker 'you died at Alcatraz alright' she tells him, but again he goes to get her as he moves further up the organisation's ladder to collect his money, this time Fairfax (Carroll O'Connor). In a show of frustration Chris punches herself out against Walker, physically spent and mentally exhausted by his self-made hermetically sealed armour. Fairfax fares no better than the others, 'you're a very bad man Walker', but attempts to square the ledger by having Walker collect again from the Alcatraz drop, and so the wheel comes full circle.

Boorman's energy and visual boldness, coupled with Marvin's single-minded rendering of Walker makes this film a blast from start to finish. Walker is a man caught out of step, an anachronism ('this is not how things are done anymore') in that he sees value in keeping your word, whereas the modern ethos as articulated by Carter, 'profit is the only principal,' leaves him flailing at shadows. Walker is adrift in a new order, as criminals invade the boardrooms and muscle like him becomes redundant, leaving him no alternative but to lash out with the violent tools of his trade. Boorman repeatedly underlines a dark humour, witness the wedding ring, or the shots of shocked glamour women's faces on a screen watching Walker brawl with a couple of thugs in a psychedelic club! Boorman uses modernistic devices like slow motion, subliminal flashback, sound to vision mis-matches, out of focus shots et al, to disorient the viewer and heighten the surreal nature of the quest. Walker is on an existential quest to find meaning in his 'work' as his inability to find it in relationships dooms any chance of happiness he may have enjoyed with Chris. Walker allowing Chris to actually have sex with the odious Reese as part of his entrapment was just another tool to achieve his result, and her view of the act as one of 'love' towards Walker is lost upon him, it's a gesture that cannot reach him at any level.

The film had no real impact at the box-office, despite the presence of Marvin, audiences struggling to make sense of what was almost an American equivalent of Jean-Pierre Melville's contemporaneous Le Samourai, and not coincidentally both films are now regarded as classics. Marvin and Boorman remained life-long friends and made the war film Hell In The Pacific with Japanese legend Toshiro Mifune as their next project.

* Mention should be made of Mel Gibson's egregious and witless remake in the naughties, so bad that Boorman considered he must have used the script Marvin had thrown away!  When the studio put pressure on Gibson's director to make changes the director supposedly asked his star for support against studio cuts. 30% of the film was re-shot with a new director, so we can assume Mel didn't stand up the same way Marvin did for Boorman. The remake remains unwatchable in any form. 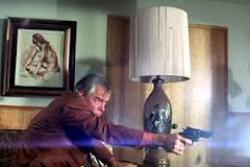 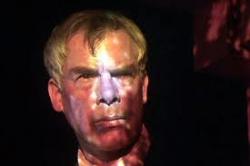 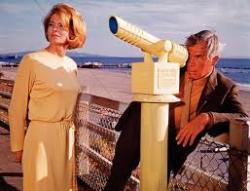 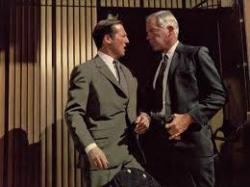 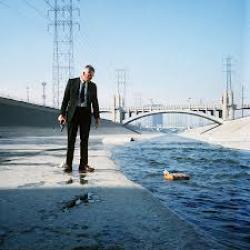