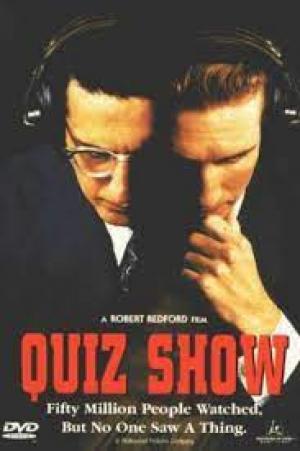 A Question of Integrity

"All of the films that I've made are about the country I live in and grew up in... And I think if you're going to put an artist's eye to it, you're going to put a critical eye to it. I've always been interested in the grey area that exists between the black and white, or the red and blue, and that's where complexity lies." ~ Robert Redford

In an era when ‘reality’ TV has both become incredibly prurient and cynically debased and had sent a so-called reality star to the White House, it’s informative to look back to the roots of it all in the 1950s with Robert Redford’s excellent Quiz Show. Redford used a sharp script from Paul Antanasio, based on the book Remembering America: A Voice from the Sixties by Richard Goodwin. Goodwin was the congressional lawyer who investigated the TV industry after allegations that quiz show outcomes were fixed in order to increase ratings and revenue. Redford uses this device to examine American mores, then at a juncture between the conservatism of Eisenhower and the turn towards a more liberal future and the promise of Kennedy.

Herb Stempel (John Turturro) is a nerdy Jewish guy from Queens who is enjoying a record run on the big paying NBC quiz show, Twenty-One. TV executives notice that the show’s ratings have plateaued and pressure him into taking a dive so that preppy WASP Charles Van Doren (Ralph Fiennes) can become the new sensation and boost ratings. Stempel is promised a future in TV that doesn’t eventuate, so he starts making accusations to a judge about the show being rigged. A young DC lawyer, Richard Goodwin (Rob Morrow) smells a rat and heads to New York to investigate, gaining enough evidence to open a congressional hearing into the matter.

Redford pitched the tome as an essay on the seductive powers of fame as much as the corrupting nature of big money stakes, with a slice of good ol’ fashioned American bigotry thrown in for good measure. Stempel is a nerdy, sweaty, un-photogenic everyman, who is supported by the network because of great ratings. And he is Jewish. When the ratings inevitably dip, they see an opportunity to replace him with the handsome, suave, impeccable blue blood Van Doren. Of course, there is a goodly swathe of anti-Semitism in the decision, but Herb goes along with throwing the game, by losing on a question he knew as well as his own name. That question was a symbolic one - ‘Who won the Oscar for the 1955 film, Marty?’ The film was about a working-class slob from The Bronx and Stempel bristled that this was the question he agreed to freeze on. Herb agreed on the condition continuing TV work would be found for him by the network, but (shock horror) they fail to deliver.

The film contains a multitude of layers - examining class battles, pop celebrity, and the power of the relatively new mass media medium, TV. The TV executives were treating the medium as a money machine, very little attention was paid regarding the moral responsibilities they owed to the vast audiences they commanded. They are like boxing promoters when the fix is in, and it only works if the boxers stay quiet and go along. And when the grift goes tits up, it’s the fighters who carry the can. The capitalist/oligarch dichotomy runs the game, and Van Doren’s privilege sees him protected from the fallout until his own conscience, and the Noblesse Oblige standards of his patrician father, nags him into an unexpected confession. Van Doren Snr's insistence on integrity at the cost of personal reputation seems positively quaint in the era of Trump and his grubby, corrupt cronies.

One of the most effective strands of comment contained in the piece, is the idea of loss of innocence. From the vantage point of 1994, the accepted, multi-media and sepia tinged look back to the 1950s was the received standard for generations reared on TV’s sweet natured Happy Days and the like. Redford takes a clear-eyed perspective to assert that some things were as corrupt then as they were in the post-Reagan Iran-Contra Affair era. Television had finagled its presence into every American home in some way or another, and in an era of lax regulation and little accountability, the only effective checks and balances of network behaviour was what the paying sponsors would put up with. It should be remembered that payola was rife in the music industry at the time, and significant figures were revealed to be rigging charts to concoct hit records in return for kick-backs – so the entertainment industry was no stranger to opportunists ready and able to push legal and ethical boundaries.

Television has been a double-edged sword in what it provides to society when balanced with what it extracts or demands in return. Network television is run as a primarily commercial concern, and the thrust of stewardship is coloured by the profit motive, not any social efficacy concerns. When the corporate monoliths ran the game, it meant that conservative and safe options were chosen, and TV was not the medium to challenge any status quo, indeed it was the prime tool to preserve the idea of a shared, agreeable and mythic status quo and asinine, dumbed down programming followed inevitably. It was further compromised by the ‘tail wagging the dog’ arrangement whereby the paying advertisers made content calls, effectively running a censorship regime about what they would allow the networks to screen on shows they purchased advertising time on. Pay TV changed all that from the 1990s onwards, and (amazingly) TV is now has a vibrant and cutting-edge component where challenging and brilliant entertainment and art can be found. The corporate monoliths underestimated the capacity of the market to absorb challenging and conceptual product and are now struggling for relevance in the face of endless streaming options some 60 plus years after the period of Quiz Show.

Redford is greatly aided by pitch perfect performances from his wonderful cast, particularly from Ralph Fiennes and John Turturro. Fiennes was an English actor more than capable of affecting an East Coast patrician persona with delicacy and surety. Turturro more than matches him as the sweaty and emotional Jewish foil, prone to outbursts and keen to fit in at the cost of his own integrity. The gravitas for the piece is neatly provided by the presence of Paul Scofield in the part of Van Doren’s establishment scion father. The earnestness of Rob Morrow’s lawyer serves as the audience POV, as we share his journey of discovery, the pulling back of the curtain to reveal the tawdry underbelly of the TV industry sausage factory.

In the 21st century, mainstream free-to-air networks have become a grab bag of variable standards, with putrid and manipulative ‘Reality TV’ shows ruling the roost. The same principles apply as seen in Quiz Show, where an audience is sold a ‘story’ for the ‘real’ character in order that they become emotionally invested. TV networks are, as ever, selling emotions as much as entertainment. It is not enough for the singer in a singing contest to have an amazing voice, it’s much better if they have a close relative who has recently died, or a handicap that they have overcome, or some other drama that can be used to manipulate the eyeballs and clicks. Plus ça change.

Robert Redford is a first-rate actor who occasionally turns his talent to directing, but when he does he goes all the way and the results are mostly top shelf, as witnessed by his Oscar winning Best Director for Ordinary People in 1980, which also won Best Film. Redford's directorial output is far from prolific but is marked by its consistent quality and Quiz Show is one of his best. Quiz Show expertly evokes the era it examines, courtesy of the exquisite eye of cinematographer Michael Ballhaus, an alumnus of Fassbinder, Scorcese (who makes a nice cameo in the film) and Nichols et al.  The film holds up remarkably well as a morality tale about a collective loss of innocence and as a reminder of the three-card trick that showbiz often conjures. The Eisenhower era may have primed the capitalist pumps in the post war years as consumerism in the USA enjoyed historic growth, but at the heart of the experience there was an emptiness, and Redford evokes that with a nice touch of melancholy and a sad, sagging, resigned shoulder shrug. The show must go on, and on, and on… 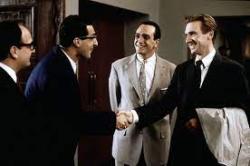 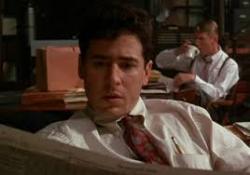 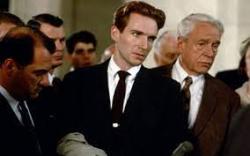