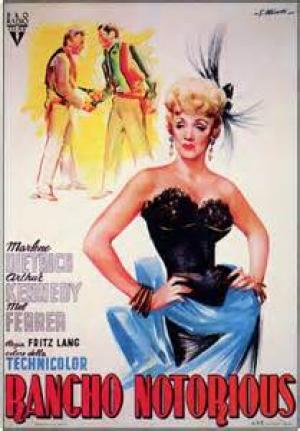 "In America, sex is preached; in France, it is done."
~ Fritz Lang

After a series of critically acclaimed Film Noir’s in the early ‘50s, Fritz Lang again turned his (one) eye to the west, in concert with fellow German Marlene Dietrich, for the claustrophobic and tense tale of “hate, murder and revenge,”  in the proto-feminist horse opera, Rancho Notorious.  Fritz Lang would not seem the obvious choice to direct American westerns and distil the myth of the Wild West, but look beyond that superficial impression and there are cogent reasons why he’s in fact the perfect choice. The stories of the American west are merely generic folk stories, similar to the German, frontier folk stories of Lang’s youth, indeed he need only change the setting from an alpine mountain to a burning, sagebrush desert et viola! Other great directors like Michael Powell mined the same tropes in Celtic and English folklore in The Edge of the World  (1937) and Gone to Earth  (1950).

Vern (Arthur Kennedy) is engaged to Beth (Gloria Henry) a beautiful young shop assistant, and seals the deal by presenting her with a striking piece of jewellery. He leaves the shop and the happy girl only to return and find her dead, victim of a botched robbery that turned to rape, the brooch taken from her clutching hand. He embarks on a quest to track down the criminal responsible, the trail leading to a nest of varmints who pay tribute to Altar (Marlene Dietrich) the hard-nosed Madame of the hideout known as Chuck-a-luck. He hooks up with Frenchy (Mel Ferrer), a boyfriend of Altar’s, and a deep friendship between the two develops as Frenchy leads him to the hideout. Posing as an outlaw on the run, Vern knows he’s on the right track when Altar appears one night wearing the brooch, and all he has to do is work out which one of his new ‘friends’ gave Altar the jewellery as part of their price for shelter. Altar doesn’t know what to make of the attentions of her new ‘tenant’, and where she normally avoids fraternising with the other rough types something attracts her to the new man and his soft manner, something she doesn’t quiet understand.

The open countryside and the gaudy sets notwithstanding, the film has all the elements of a classic Noir, with Dietrich the quintessential femme fatale. Altar is accustomed to using her charms to wrap any man around her finger, and when Vern seems immune to those charms, she’s intrigued.  As in the standard Noir  the film has a dark fatalism at its core, as all the characters attempt to outrun their past and change the numbers the dice have rolled. The gambling motif happily underscores the element of chance that is seemingly at play in the lives of the protagonists. Brando would boldly re-imagine the west a decade later with his utilisation of the seaside location of Monterey, achieving an impact by delivering the familiar with the unfamiliar within the same frame, and it's this effect that Lang exploits by centring the usually macho western mythology around a strong woman character.

Strong women were not a staple of the western genre in the early years of the form, but post WWII many of the old clichés were overthrown in favour of a more nuanced narrative to speak to a generation coming to terms with massive change.  Directors like Anthony Mann and Nicholas Ray found new ways to incorporate women in the narrative with Mann’s, The Furies,  giving Barbara Stanwyck a career best role and Ray’s Johnny Guitar  doing the same for Joan Crawford. Lang got in on the act by giving Dietrich a fine opportunity to match it with the other Grande Dames and, being a Dietrich vehicle, the ubiquitous ‘saloon’ song was thrown in for good measure. Dietrich was on sure territory, having made a success of her role as Frenchie in Destry Rides Again  with James Stewart before the war.

The war changed many things, not least gender roles, as women bore the brunt of keeping heavy industry going while the men were off fighting the war in Europe and in the Pacific. Rosie the Riveter was temporarily forced back into her kitchen apron again during the Eisenhower years as a re-tooled America enjoyed the largest consumerist boom in recorded history. But the nascent feminist dam was filling fast with these quasi-subversive westerns and with the likes of Douglas Sirk’s multi-layered critiques of patriarchy in gems like All That Heaven Allows in 1955. The dam finally burst in the ‘60s, as a generation of young women embraced feminism and the counterculture to blow away many of the restrictions their mothers and grandmother’s laboured under.

Dietrich was in the final phase of her Hollywood stardom, reluctantly leaving behind the glamour roles and opting for more interesting character parts, more suited to her age and skill. Rancho Notorious offered her the perfect part to display both toughness and vulnerability, as she again essayed a woman with a past, caught between the danger of her occupation and the promise of a life of love and happiness. Dietrich is compelling in the role, even though she clashed with the cinematographer Hal Mohr, and with Lang, both over her insistence that she be lit to look younger than her then 50 years. Mohr, who had shot Dietrich on Destry,  attempted to resign from the film and Lang, who had been a former lover of Marlene’s, forever marred their friendship.

Rancho Notorious  was Lang’s third western, coming some 16 years after he’d arrived in the US, a victim of the Nazi’s rise to power in 1933, an event that rendered his Jewish lineage something of a liability, to say the least. Lang says he fled Germany the same day he was offered control of the countries film industry by Goebbels himself, obviously unaware of Lang’s familial bloodlines (his mother was Jewish), leaving behind a wife who was a paid up member of the National Socialist Party! Lang started off his Hollywood career with a bang, helming the Spencer Tracy lynch mob property Fury,  before falling victim to the machinations and politics that Hollywood was prone to. At the time, his Hollywood career was deemed lacklustre when compared with the glories of his seminal German work, but a reassessment by the French critics of the 1950’s means it is viewed in a different light today and Lang is recognised as one of the prime pioneers and masters of Film Noir.

*Howatd Hughes, the eccentric owner of RKO at the time of the film's production hated the original title, The Legend of Chuck-a-Luck  and had it changed to Rancho Notorious. 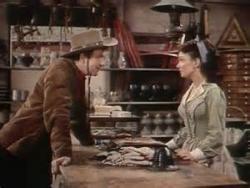 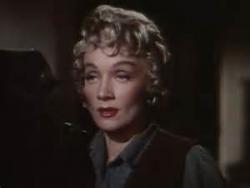 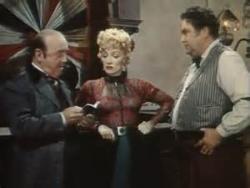 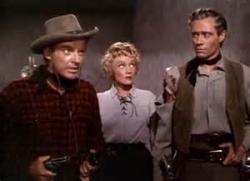 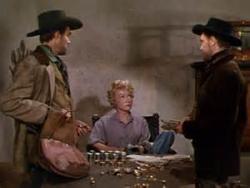 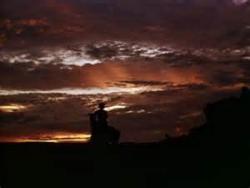