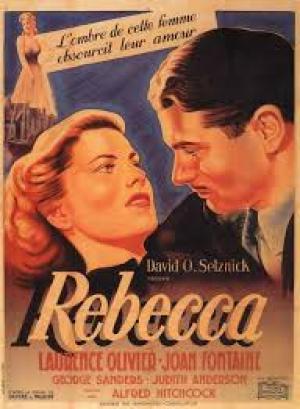 "Luck is everything... My good luck in life was to be a really frightened person. I'm fortunate to be a coward, to have a low threshold of fear, because a hero couldn't make a good suspense film." ~ Alfred Hitchcock

Alfred Hitchcock arrived in Hollywood in 1939 armed with a contract to work for the most famous producer at the time, David O. Selznick, whose most recent film was the blockbuster prototype Gone With The Wind. The two individualists struggled to maintain an amicable relationship and Hitchcock was given a Daphne du Maurier adaptation as his first American project after a mooted film on the Titanic disaster was deemed too expensive to produce. Selznick wanted to cast Ronald Colman and Olivia de Havilland in the lead roles but settled on the cheaper option of Laurence Olivier, fresh off a hit in William Wyler’s Wuthering Heights, and de Havilland’s younger sister, Joan Fontaine and both stars earned richly deserved Oscar nominations in a fine film that won Selznick a second Best Picture Oscar in a row.

An un-named, mousy young woman (Joan Fontaine) works as a lowly assistant for a wealthy woman holidaying in Monte Carlo. The girl meets Maxim de Winter (Laurence Olivier) under suspicious circumstances where he seems to be considering jumping off a cliff, but the pair become friendly and eventually Max proposes marriage. The couple return to Max’s family estate, the sprawling and legendary Manderley in England, a house run with iron willed efficiency by the housekeeper, Mrs Danvers (Judith Anderson). It soon becomes apparent to the new Mrs de Winter that she is living in the shadow of the recently departed first Mrs de Winter, the renowned beauty Rebecca. Max’s wild emotional mood swings make life at Manderley problematic for the naïve young girl, and Mrs Danvers seems hell-bent on getting her out of the picture so that the memory of Rebecca can be the sole, revered Mrs de Winter.

In pre-production, Hitch tried to bend du Maurier’s novel to fit his particular concerns, but Selznick would not have a bar of it, “We bought Rebecca and we’re going to film Rebecca,” he fumed. Hitch worked with several writers to hone a version that passed muster and still maintained the mood of the novel, but once outflanked on narrative content he turned his mind to providing a rich visual tapestry. Selznick wanted the hottest cinematographer of the day, Gregg Toland, to shoot the film, but turned to Toland’s mentor George Barnes, once Toland was unavailable. Barnes was able to realise Hitch’s intricate visual demands so well he won the Oscar for his work. The film is laced with breathtaking imagery, richly detailed and lit formidably, showcasing both Hitchcock’s verve and his roots in German Expressionism. The film is visually more ‘Noir’ than many famous Film Noir’s but is generally considered to be a ‘gothic’ melodrama – either way the results are a feast of visuals, elegant and evocative.

Laurence Olivier is note perfect as the brooding Max, tortured and mostly miserable, holding on to his timid new bride like something of a life preserver to a drowning man. “Happiness is something I knew nothing about” he tells the girl, who is stunned to discover that Max hated Rebecca in actuality, which confuses her given the hagiographic descriptions of Rebecca she’s endured from the lips of Mrs Danvers. Joan Fontaine is totally convincing as the girl, completely gauche and inured to the ways of the gentrified classes and their labyrinthine machinations. Olivier disliked her actively and thought her wrong for the part, a situation that possibly added to Fontaine’s vulnerability in the relationship. Hitch spent a lot of time with her early in the film with her (so much for “actors are cattle”), so much so that he was 5 days behind schedule after 2 weeks, but the result is the heart of the film, a performance that allows the audience to experience the story in all its gut churning glory. Fontaine is perfect as the unglamorous, tremulous and conflicted girl and she was duly nominated for an Oscar and became a star overnight.

Alfred Hitchcock’s output was characterized by a lifelong interest in sexual perversity and the challenge in examining and presenting that in way that could get past the censors was, for him, a delicious dimension to his work. In one of two notable departures from the novel, Hitch underlines a lesbian subtext between Danvers and Rebecca, and the Hays Code (which totally missed the lesbian overtones) insisted that Max could not be a deliberate murderer and go unpunished. After his wife had met “Rebecca’s favourite cousin”, (a delicious euphemism for 'lover') the oily Jack Favell (George Sanders), Max declares Rebecca was “incapable of tenderness and decency” and reveals the “dirty bargain” she forced upon Max, where she would take any lover that took her fancy and play the dutiful chatelaine of Manderley in return. Hitchcock was aided in the implied possibilities by a stunning performance from Australian actress Judith Anderson, a Broadway star who had played Lady Macbeth opposite Olivier in London only 3 years before. Anderson is riveting in her characterization of the obsessive housekeeper, and her tour of Rebecca’s room for the new wife, and her lurid pawing of her dead mistress’s underwear is one of the great scenes in any Hitchcock film. Danvers entreaty to the girl to solve everybody’s problems by killing herself is evil itself, her delivery soft and chilling, “Why don’t you?... go on… don’t be afraid…”

Rebecca is also a window into the paralysis of grief, as well as its disorienting effects on behaviour. Danvers is a woman still in perpetual mourning, dressed in black with a funereal air and struggling as to how to keep her beloved mistress from being completely written out of Manderley’s past. Max is also grieving, possibly for a past that never existed, possibly for his own integrity which he’d forfeited to his bedevilled first wife, almost intellectually impervious to the hope his new wife offers, but somehow subliminally emotionally drawn to it.

Selznick provided the muscle for Hitchcock to realise a big Hollywood movie with major resources denied him in England and although it’s notionally an American film, it’s culturally British to the core. Daphne du Maurier was offered the screenwriting job but declined because she hated what Hitch had done with Jamaica Inn, his last British film, where he took major liberties with her source novel. British playwright Robert E. Sherwood oversaw the final version of the text, and Hitchcock filmed only what he needed, which infuriated a producer who wanted to make changes but couldn’t due to lack of cutting options. Selznick opted for some reshooting and cut the final version, but it has Hitchcock’s fingerprints all over it. Pure class.

Rebecca is more than the sum of its parts. Hitchcock’s visual aesthetic is fully formed and undeniable and the mostly British cast doesn’t miss a beat, C. Aubrey Smith, Nigel Bruce and Gladys Cooper are very good, but Sanders and Anderson are brilliant and unforgettable in their roles. In later life Hitchcock disowned Rebecca, his view of Selznick’s influence probably blinding him to just how recognisably a Hitchcock film it still is. While the trademark wit and humour of his late British period is toned down, the examination of obsessiveness, and the macabre and solemn mood of Rebecca is something he brought out in many of his own personal favourites, like Shadow Of A Doubt, which has an equally unsettling tone and Teresa Wright could easily be the substitute of Joan Fontaine in many regards. Regardless, Rebecca is the only Hitchcock film that won Best Picture, and Hitchcock’s opinion of the Academy’s ability to ignore his body of work individually is best summed up in the full text of his acceptance speech for his special Academy Award for his lifetime achievement in 1968, “Thank you, very much indeed” he said. 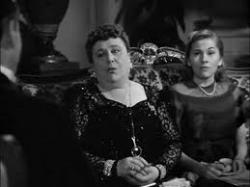 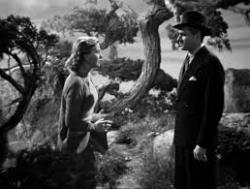 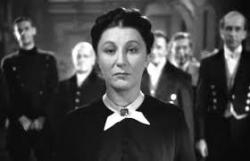 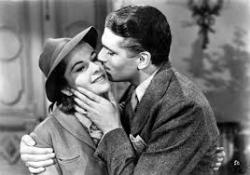 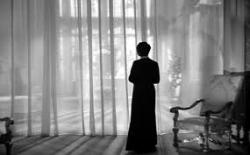 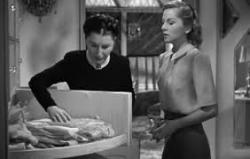 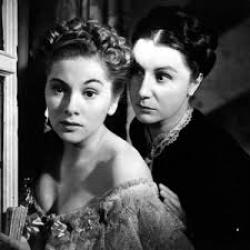 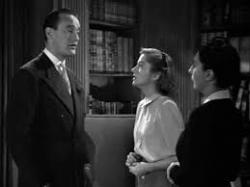