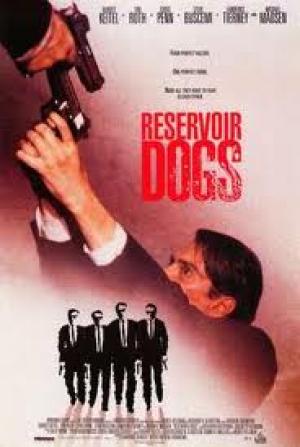 Quentin Tarantino burst upon the cinematic landscape like a sledgehammer jolt with his tense and violent debut, 'Reservoir Dogs' in 1991, giving hope to film geeks everywhere and reaffirming the power of a well realised simple idea. Tarantino used an ensemble cast, devoid of major stars but full of accomplished actors, and kept the sets to a minimum, as most of the action takes place in a small, disused warehouse. Tarantino tapped three generations of talent in veteran Hollywood actor Lawrence Tierney to head the gang that planned a jewel store heist, Harvey Kietel in the key role of Mr White, the link to outstanding younger actors like Tim Roth and Steve Buscemi. Tarantino's pop savvy, self-referential and glibly hip riffing kept the mix bubbling along with verve and energy, and forced a re-thinking of what film had become. Tarantino shook up the film industry in much the same way as Kurt Cobain and his band Nirvana would stir the moribund music industry, and light the path for a new way forward.

A group of men are sitting around taking breakfast and coffee, talking about nothing in particular, a trope Tarantino will push in his subsequent films, as Mr Brown (Quentin Tarantino) riffs on the sexual implications of Madonna's 'Like A Virgin'. Six of the eight men are dressed in black suits and proceed to carry out the planned diamond heist. We cut to a car where one of the men, Mr Orange (Tim Roth) is shot and bleeding, and the other, Mr White (Harvey Kietel) is driving. They drive to the rendezvous point, an abandoned warehouse, where Mr Pink (Steve Buscemi) shows up, alarmed by what's happened and assuming the job was ratted out by an inside man. The psychotic Mr Blonde arrives, with a captured police officer and he interrogates him, while Pink and White go with Nice Guy Eddie (Chris Penn) to retrieve the diamonds. Blonde tortures the police officer, while Orange is passed out on the floor. He wakes to shoot Blonde, the others arrive, as does Boss Joe (Lawrence Tierney) who accuses Orange of being a plant, leading to a 3 way Mexican stand off.

Tarantino builds his puzzle-as-homage in equal parts, Hollywood noir and heist films like Kubrick's 'The Killing' on one side, and cheap, violent exploitation films of Asia on the other. The budget for the film increased substantially once Harvey Kietel signed on, but Tarantino resisted the urge to film the actual heist, and the decision paid off in creating a mystery around the event that infused the subsequent action. Tarantino plays with the timelines via flashback, and builds stories around each key protagonist in doing so, eventually piecing the back-story of each together just as the action comes to a climax. He keeps us guessing as to the full story, parting with bits of information but always favouring character and mood in favour of straightforward exposition. We know Blonde is a psycho, as White says, "a psycho ain't a professional", and Tarantino disarms us with a jaunty tune, before reminding us of what we already instinctively know.

Tarantino re-energised the Indy film in the same way Godard did with 'Breathless', only sans girl, Tarantino used only the gun. A virtue was made of the fact that the men involved were not poets or scientists, they talked a lot about nothing, but the accretion of detail that built up around them filled in the blanks. Pop culture was their touchstone and in that world an episode of TV show 'Baretta' takes on the weight of a Shakespearian tragedy, as does the minutiae of arguing the merits of Pam Grier versus Honey West. Tarantino creates a bizarro criminal universe in finding areas of philosophy hitherto unexplored in a crime film setting, it's a neat trick that freshens a flagging genre.

The commitment and range of the actors is a huge plus for Tarantino, with Kietel and Roth stand-out's in a superb cast. Michael Masden plays Blonde with a nicely subdued edge and it adds to the horror of his dead eyed killer's actions. Steve Buscemi is excellent as Mr Pink who wants to be Mr Black, "I'm above it, move on", and argues as passionately against tipping as he does regarding the professionalism required from Mr White, "you gave him your name"?, when he discovers he breaks the code in talking to Orange. Tarantino may be more Carpenter than Hawks, but his characters avow 'professionalism' in a similar way, and Joe realises he wasn't professional enough in vetting his team, leading to the recriminations and bloody consequences.

Tarantino rode the wave of acclaim that 'Reservoir Dogs' afforded him, and for his next trick, he upped the star power and the ante considerably with a budget 8 times larger than his debut.  Thankfully, he kept the near guerrilla, streetwise, filmmaker ethos in tact, and made a low brow, post modernist slashing follow up, that kept the best traditions he'd established with 'Reservoir Dogs', but expanded them out to something that contributed remarkably to the pop culture he so loved. 'Reservoir Dogs' had lots of bark, but plenty of bite, and Tarantino showed he was capable of great wit and flair as well as in-your-face splatter. It's a fine line to tread, and one that requires dexterity and balls, to play to the geeks but to create something that effortlessly moves beyond them. 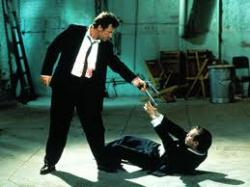 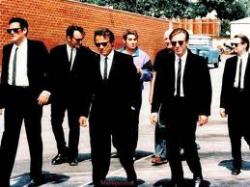 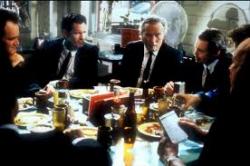 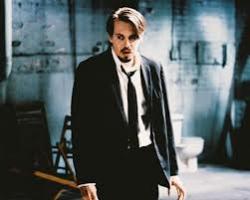 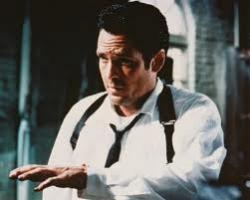