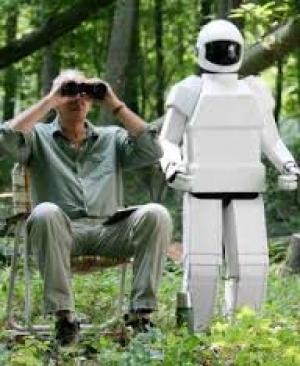 Robot and Frank is a charming modern fable, an ode to friendship in unlikely laces, and a subtle meditation on aging and identity. Jake Schreier directs with an easy eye for finding the heart of the frame and Frank Langella delivers a superb performance as the crusty old ex cat burglar having to deal with life as his senses desert him incrementally. Christopher Ford provided the nicely understated script and Susan Sarandon and Liv Tyler flesh out the support roles ably.

Frank (Frank Langella) is in the initial stages of dementia, as his brain develops gaps in its capacity for him to negotiate life in his comfortable upstate New York village. Frank breaks into a home late at night, picking the lock, and goes about stealing some goodies, only for the realisation to dawn upon him that it's his own home. Frank's son Hunter (James Marsden) arrives, concerned about his father's health, with a Robot servant, to help take care of Frank's needs. Frank rejects the gesture initially, but warms to the Robot when he realises it has no moral judgement to make on Frank's activities or past. The Robot acquiesces to Frank's plot to reactivate his cat burglary, as it recognises the activity has medicinal benefits that outweigh the risk of capture. Frank gleefully embraces the opportunity to carry out an elaborate heist on a nearby target, and becomes a suspect in the process as the Sheriff comes knocking.

Robot and Frank treats issues of aging and aged care, a massive issue in western society given the baby boom generation are reaching retirement age, with tenderness and intelligence. Subtle metaphors are woven into the script in the form of the library and the value of old books, as questions are asked about how we value our "connection to the past". A yuppie developer is upgrading the local library, of which Frank seems to be the main user, but the key strategy of which involves throwing out all the old books. Frank feels much like these old books, not valued and redundant in a digital age. The irony is Frank finds real connection with a product of the technological age, the Robot, as he struggles to keep his identity and his marbles intact. America has a health system under stress currently, and in need of massive change, and after Obama's legislation barely got through in 2012, it's clear America struggles with the idea of a collective solution to anything, wrong headedly labelling the reforms as 'socialist'. Affordable health care for the aged will be a major issue in the near future, and robotics may be able to help provide cost effective solutions.

The fact the Robot character is morally neutral, is also an interesting take on the question of robotics. Ever since the machinations of HAL in Kubrick's immortal '2001: A Space Odyssey', cinema has mostly favoured the 'malevolent machine' version of technology, emphasising the threat, in a thriller format, rather than the useful utilitarian aspect. Robot uses his programming to assess the benefits of Frank returning to a life of crime, and as the numbers come down on the side of a 'medicinal' benefit to his patient, Robot helps with the caper. Robot also suggests he lay down his life for Frank when the heat comes calling, as clearing his memory is the only way Frank can avoid conviction and imprisonment. Frank has to decide if he can 'kill' his friend, as issues of just what constitutes intelligent life swirl in the background.

"He's not a slave.... he's my friend", Frank tells his daughter Madison (Liv Tyler) as she turns Robot off and takes on her father's care. Ethical questions about use of machines are tacitly raised by Robot as he asks if Madison was "politically aligned against robot labour"? Frank eventually is incarcerated, but in a nursing home not a prison, where every 'inmate' has a Robot carer, and Frank keeps the memories of his time with Robot as sharp as any in his deteriorating brain, valuing the time when he could be 'himself' again, and thankful for the relief from loneliness the Robot provided.

Frank Langella again proves himself a fine and capable actor as he effortlessly portrays the aging criminal who has neglected to provide for his own old age. Frank may not have been a great family man, as his estrangement from his wife suggests, and the loneliness he experiences seems to be a result of his own life choices. Frank is isolated and struggles to admit he needs contact and friendship to fill his life and provide meaning. In this way Frank is an elderly man in the midst of an existential crisis, and Langella frames his performance in a way the extracts full measure from this set up. It is simply one of the most nuanced and subtle characterisations of aging in modern American cinema.

A sharp, bittersweet and intelligent little gem, well worth a look. 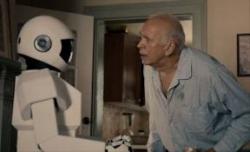 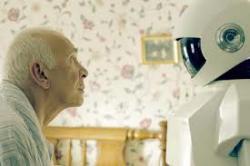