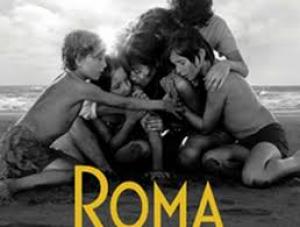 "When you strip hope from people, it leaves a void, and that void needs to be filled. And very likely, that void is going to be filled by an ideology... Hope and faith are so connected. Now, when ideology connects with faith, the ideology becomes an item of faith, not a point of discussion. " ~ Alfonso Cuarón

Mexican born Alfonso Cuarón has emerged as one of the leading filmmakers of the 21st century, compiling a CV as a director that included a Harry Potter film (the third and one of the best), Children of Men and Gravity, for which he won the Academy Award for Best Director in 2014. He also notably produced his good friend and countryman Guillermo Del Toro’s masterful Pan’s Labyrinth, but in 2018 with his stunning film Roma, (and a second Best Director award) Cuarón cemented his reputation as a serious director for the ages. Not only did he write and direct Roma, but he shot the film himself and co-edited the work, making the autobiographical story set in 1970’s Mexico even more of a personal statement, one resonant with a deep humanity and heartfelt compassion.

Cleo (Yalitiza Aparicio) is a housemaid in a middle-class suburb in Mexico City, to a doctor, his wife Sofia (Marina de Tavira) and a family of four children. She shares the housekeeping duties with Adela, another maid, and the Doctor’s mother also lives in the nicely maintained house, albeit one where avoiding dog shit in the driveway is a daily dance. Cleo has a close relationship with the family, but their world is thrown into turmoil when the doctor leaves for another woman. To complicate matters Cleo becomes pregnant to a feckless martial arts lover and together the family tries to make sense of this new reality in the stresses and strains of urban Mexico, bubbling with political unrest and class tension.

Cuarón constructs a multi-layered slow burn, adopting an almost documentary approach to the tome, infusing it with effortless, telling but understated detail. The film marinades in this approach, never rising to a level of showiness or overt emotion, and always delivering under a slow but deliberate pace designed to pull the viewer into a tone, a mood that stays long after the final scene. The class issues at the centre of the piece and the attendant political ‘troubles’ on the street are never directly addressed, they are merely part of the reality of life for these people, part of the authoritative narration that Cuarón commands. The shared bond between the family and Cleo is the beating heart of the film, and that bond is put to the test by the tacit reality of the uneven power class bestows; Cleo may be part of the family, but she is also an employee and the tension created by that compact is never far from the surface.

Mexico in 1971, like many countries, was still dealing with the political fallout from the 1968 student unrest in Europe and the USA, which was amplified in Mexico due to the 1968 summer Olympics held in Mexico City. On the back of that event, the notionally socialist Mexican government got into bed with undercover US agencies and cracked down on dissent, eventually leading to mass protest, tanks on the street and the Corpus Christi massacre that served as a disturbing and incendiary set piece in Roma. The government was found to have let loose a group of US trained militia on the protesting students, who then caused the death of 120 protesters, while the police were ordered to not intervene. Cuarón weaves the political and the personal seamlessly here, the macro and the micro, and never stoops to didacticism or polemics, which adds a layer of the surreal to what is otherwise a hyper-real approach to the travails of his little band.

The film owes a debt to Italian Neo-realism and to the tones and beats of Luis Bunuel’s groundbreaking Mexican based work in the 1950’s, especially the working-class focus, the visual poetry and subtle surrealism of Los Olividados. Cuarón counterpoints a family in the process of breaking down with a city in the process of breaking down, and each situation mirrors and infects the other. Through both aspects of struggle, life goes on, and in such an unfussy, straightforward way that can’t help but be life affirming. Cuarón unpacks the emotional conflicts surrounding Cleo with absolute delicacy and precision, as the young woman tries to make sense of a changing and challenging world.

Yalitiza Aparicio gives a beautiful performance as the hired help, investing it with an authenticity that anchors every relationship in the film. Marina de Tavira is also noteworthy as the much put upon wife, caught between her husband’s betrayal and the needs of her brood and wider family, it’s a delicate and touching portrayal of inner grit and quiet tenacity. Both key women find a modicum of grace under pressure when the world is falling about all around them, and Cuarón’s respect for each character is evident in every frame. The casting is top shelf, all the child actors are all capable and believable, as is the small part by Verónica García as Sophia's mother.

Roma is the work of an artist at the top of his game, and if Netflix enable nothing else in their corporate history, they will at least have done this. Roma a humanist masterpiece. 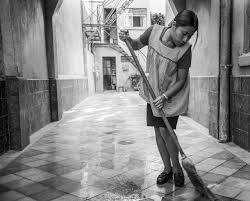