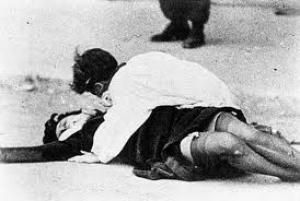 Roberto Rossellini's masterful neorealist film, Rome, Open City, defined the new type of cinema that emerged from Europe in the wake of the catastrophe of World War II. The film remains the definitive, contemporary ‘resistance’ essay and its documentary ethos affords it a lasting impact, produced as it was stripped of any gloss or artifice, its influence still resonates. Rosellini, and his mainly communist co-writers, set the film in the period between the fall of Mussolini’s fascist government and the liberation of Rome by the allies in August 1944, and began filming a few months after the Nazi’s left and Rome was declared an Open City, i.e no longer being defended and invading forces are free to march in unopposed. Rome was in chaos and money was in short supply, but a rich Italian woman offered to fund a project based on the life of an Italian priest who was killed by the Nazi’s because of his work in the Resistance. The fascist built, state funded production facilities at Cinecittà were unavailable, having been ransacked by the occupying German army, forcing Rosellini and his crew (fortuitously as it turned out) to take to the streets.

Catholic priest Don Pietro (Aldo Fabrizi) aids the resistance against the Nazi occupation, as he juggles the usual tasks of confession and marriage ceremonies. Pina (Anna Magnani) wants to marry Francesco, she is a Catholic and he is a communist and resistance fighter, and Don Pietro is set to officiate. Informants are the life blood of the Gestapo and eventually both men are betrayed and captured. The city, in the form of the poor and marginalised, fights back, as the Nazi’s delay the increasing dismantling of their authority but events take on a deadly inevitability.

Rossellini and his writers use a symbolic marriage of Catholicism and communism to make a dramatic point, but in reality it was a very uneven alliance. The communists and socialists dominated the resistance struggle, but Catholics counted for a much smaller percentage, notwithstanding priests had a special role to play via their networking capabilities. It is this level of manufactured drama that indicates the film is as much a conventional drama as neo-realist work, but the energy of the street filming and documentary type elements more than compensates. “Doesn’t Christ see us”?, a despairing Pina asks the Sicilian priest, another example of the subtle regional divisions in play in the complex urban melting pot. The priest is tortured and told to betray his ‘atheist’ communist co-conspirators by the fellow Christian Nazi’s, only to be told “Anyone that helps another is doing God’s work”.

The Roman people form a kind of tide against the occupiers, who attempt to maintain a façade of control and strength via a network of informers and collaborators. The Nazi elite are seen in splendid isolation, detached from a population they delude themselves as to their reach and influence, sending out the storm troopers when all else fails. In contrast the people of Rome are seen in groups and collectives, supporting and defending each other, even during personal struggles or the internecine squabbles that occasionally erupt. In this way Rossellini affirms that the city is the people, and when the Nazi’s inevitably leave the people will abide, a fact that finally dawns on the Germans, one of whom despairs ironically, “And I thought we were the master race”.

Rossellini had indulged in his own kind of collaboration with the fascists, having made three propaganda films for Mussolini prior to Rome, Open City at their Cinecittà facilities. The Italian fascists sided with Germany in the war before falling into an internal struggle for power in Italy, the result of which split the country and led to the Nazi’s occupying the northern regions while the south remained anti-fascist and loyal to the King who had deposed Mussolini. It was this schizophrenic nature of the Italian condition that informs Rossellini’s drama, an atmosphere of division within division that gives an unsettling aura of shifting loyalties. In the north collaboration with the Nazi’s was a fact of life, and resistance in an atmosphere of mistrust made for uneasy bedfellows in the right wing catholic and left wing communist and socialist groups. Rome, Open City makes the point that the things that unite us, (our humanity) are greater than the things that divide us.

Rome, Open City made a star of Anna Magnani, as her stunning portrayal of the dedicated Pina burned itself into cinema immortality. Magnani had been making films for well over a decade but the times and the role suited her earthy vitality and volcanic emotional range. She and Rossellini fell in love and entered a fractious relationship during this period, but it ended when Rossellini gave the part he’d written for her in the film Stromboli to another actress, Ingrid Bergman, but that’s another story. Magnani went to the US and had great success in a series of roles, becoming a favourite of playwright Tennessee Williams no less, so enamoured of her talents he was inspired to write The Rose Tattoo especially for her, and 4 years later her film version of that role would win her an Oscar.

Rossellini was pilloried in Italy upon the release of the film, and it was not until it found acclaim in France (it won the Palme D’or at Cannes in 1946) and in the USA and Britain that opinion turned around and he was proclaimed the ‘father of neorealism’. Rossellini said, “I suddenly went from artistic cretin to international genius in a matter of weeks”. That’s showbiz. Neorealism was a sensation and became a buzz word in cinematic terms as the rulebook was thrown out forever as to what constituted an acceptable level of production standard. France and Hollywood may have looked for escapism during the war years but the fallout of all that misery saw post war populations ready to embrace a grittier filmic reality, one that supported both Film Noir and the flood of Brando style method actors that followed in the wake.

Rossellini said of neorealism that it was “above all a moral position from which to look at the world”, and Rome, Open City asks hard moral questions. Rossellini posits these questions in a neutral tone, and offers no glib solutions, witness to the fact that occupation and collaboration in Italy during this period was a canvas with infinite shades of grey. Rossellini’s co-scenarist on Rome, Open City and future director Federico Fellini said later “When talking about neorealism one can only refer to Rossellini”. 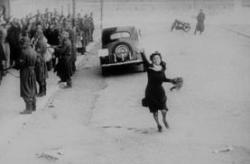 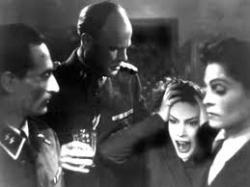 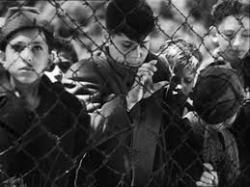 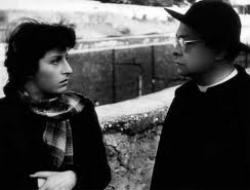 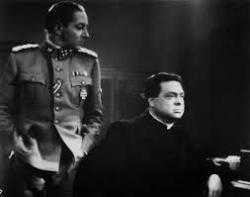