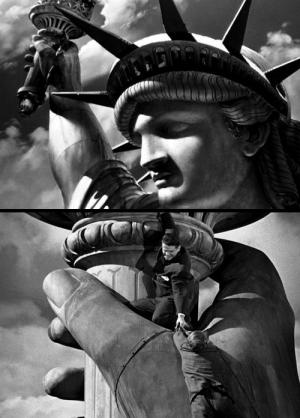 Hitch goes to war, sort of.

‘Saboteur’ was Hitchcock’s fifth American film and his first film to directly address America’s late entry into WWII, made in 1942 and focusing on the dangers fifth column activity represented in the homeland. Hitch’s plea to America to end her isolationism with ‘Foreign Correspondent’ did well two years earlier and his last word on the subject would be the excellent ‘Lifeboat’ in 1943.   Contracted to David O Selznick, who didn’t want to produce this film, Hitch was sold as a package to Universal, at a great profit to Selznick, and made the film there.

Hitchcock wanted to cast Gary Cooper in the lead, who turned him down, and Barbara Stanwyck, who he couldn’t afford as the woman opposite, but in the end he had to settle for Robert Cummings and Priscilla Lane. Joe Valentine, an experienced cinematographer who’d done ‘The Wolf Man’ for Universal, and who’d do ‘Shadow of a Doubt’ and ‘Rope’ for Hitchcock made great use of the New York locations and provided a great atmospheric mood for Hitchcock’s suspenseful story. The film started production two weeks after Pearl Harbour and so the patriotism overload is understandable and ultimately not too intrusive and is well handled by Hitch.

Barry Kane (Robert Cummings) is a factory worker in the aviation industry and gets caught up in an event that sees his best friend die. The only man that can clear Barry from any suspicion of the sabotage involved is a fellow worker, the mysterious Mr Fry (Norman Lloyd), who disappeared after the event and who has no record of being employed at the factory. In the classic Hitchcock fashion he embarks on a journey to clear his name, and if Hitchcock didn’t invent this ‘wrong man’ paradigm, he certainly perfected it with ‘The Thirty Nine Steps’ prior to this film and with ‘North By Northwest’ some years later.

Hitch provides his usual charming and clever villain in the wonderful Otto Kruger as Charles Tobin, who suavely underplays the evil involved in his treachery. The common man, as represented by Kane is assisted by the average people he comes across, but also interestingly by a troupe of circus freaks. While not as breathtaking as the crew that inhabited Tod Browning’s 1932 masterpiece ‘Freaks’, they manage to convey the pathos of being fellow outcasts, and in a show of democracy against fascism they vote as to accepting Kane’s innocence or guilt, in the same way the hotel patrons of Renoir’s poetic realist film ‘Le Crime De Monsieur Lange’.

Kane’s ace up his sleeve in the circus kangaroo court is Pat Martin (Priscilla Lane), a pretty model who is at first convinced of his guilt, but who accompanies him on his travels and her position softens. Her uncle was a blind man who instinctively understood Kane’s innocence, and in a scene that seems to have been written by the great Dorothy Parker (the bit about billboards being laid out end to end is a giveaway) he waxes lyrical about art and politics in a decidedly literary and delightful fashion. Parker may have been suggesting that true justice is indeed blind. Pat and Barry end up in New York, where they are knee deep in spies at an upper class Fifth Avenue mansion, and of course no-one will believe their mad assertions. The assumption that even Manhattan dowagers can be traitors was nice, black Hitchcock-ian twist.

Hitch made some great location sequences in New York, memorably using the Radio City Music Hall interior in a balletic counterpoint with an actual movie that cleverly mirrors the actions of the fleeing gunman. The tour de force is of course a forced tour of Lady Liberty, as Fry climbs to the top of the torch, only to have Kane get the drop on him. The sequence is a precursor in every way to the Mount Rushmore finale in North by Northwest, only here Hitch doesn’t bother to find a neat cut that solves the puzzle.

Cummings may not be Cary Grant, but he’s likeable and serviceable as Hitch’s put upon everyman, and Lane is lovely as the not very ice blonde, more the girl next door type who sticks by her man no matter what. In the end the threads of the plot may not completely hold together and may unravel like Fry’s coat, (‘he could have used a better tailor’ said one wit) but it’s grand entertainment if you’ve a taste for Hitchcock or charming ’40’s movies. 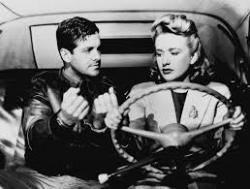 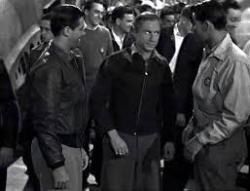 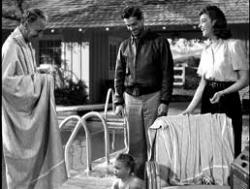 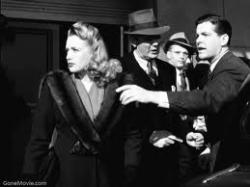 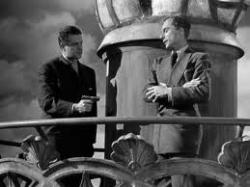