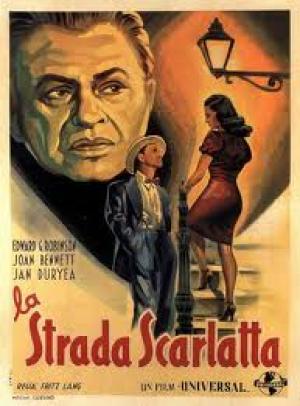 A noir shade of scarlet

"I am profoundly fascinated by cruelty, fear, horror and death. My films show my preoccupation with violence, the pathology of violence."
~ Fritz Lang

Fritz Lang, like many other filmmakers in the mid to late 1940s seeking independence from the major studios, formed Diana Pictures in partnership with producer Walter Wanger, his actress wife Joan Bennett and writer (and John Ford favourite) Dudley Nichols.  The key contributors were coming off the film noir success of Woman In The Window and pooled their resources to make the very similar Scarlet Street, a re-make of Jean Renoir's early 1930s French film, La Chienne. Bennett was happy with her experiences with Lang, starting with the taut war thriller Man Hunt and thought Lang a class act who could prolong her already long career with quality projects. Wanger also had history with Lang as he'd produced the Austrian émigré's second American film, the excellent proto-noir, You Only Live Once in 1936, reportedly clashing with the notoriously prickly director in the process. Lang used the same stars, Bennett and Edward G. Robinson and cinematographer as Window, Milt Krasner, to give the films a startling continuity, adding to the effect by using Dan Duryea in a larger role than the previous colaboration.

Chris Cross (Edward G. Robinson) is a conservative cashier, honoured for his many years of faithful service by his philandering employer. Cross stumbles across a Greenwich Village incident where a woman is struck by a thug who runs off as Cross comes to her rescue. The woman, Kitty (Joan Bennett) soon inveigles Cross into her life, and her pimp boyfriend, Johnny (Dan Duryea) sees a chance to exploit his naiveté. Soon Cross is lying to Kitty, pretending to be a wealthy and successful artist, and Johnny tries to sell his paintings to New York dealers with surprising results. Cross steals money to help set up his prostitute girlfriend in a nicer apartment, as his jealous wife gets suspicious. Things come to a head when Cross discovers Kitty and Johnny are more than acquaintances, Johnny's cover as the boyfriend of Kitty's ex-roommate having been blown.

The pulp-ish set up suited Lang's sensibilities to a tee, equipped as he was to prod at the dark heart of men and tainted love, and to add an overlay of European fatalism. Lang sets the scene nicely as Chris watches his rich employer walk out of his tribute dinner with a gold digging tart, much to Chris' amazement, and he can't help but wonder what it would feel like to be attractive to a younger woman. Chris is seduced by the allure of power, and its strength as an aphrodisiac to women is soon witnessed when Kitty believes him to be a rich and well known painter, and plays him like a Stradivarius. Chris' vanity leads him to betray everything he's worked for, his clinging wife and his cloying job notwithstanding, in the futile pursuit of a glamourous, air-headed bimbo. The startling ending has Lang avoiding the standard 'sinner must pay' scenario, so often demanded by code era Hollywood, and incredibly he has someone else pay for Chris' crime. It's a moral subversion not often seen in films of the time, even though we know Chris is fated to suffer interminably for what he's wrought.

Joan Bennet gives a fine performance as the empty-headed prostitute Kitty, too stupid and too bored to maintain the level of malevolence towards Chris that Johnny demands. Kitty is a pathetic creature who is only too aware that the looks she trades on are a diminishing commodity. Unlike other femme fatale roles in Film Noir, this woman is a passive participant in the action, a blank canvas for Chris to pour all his fantasies and desires on. Bennett enjoyed working with Lang enormously; happy the great director treated her seriously as an actress and allegedly had an affair with him during their various collaborations. One assumes Wanger remained ignorant of that salacious morsel given his conviction for shooting another of his wife's lovers! Dan Duryea again provides effortless nastiness, as slimy and seedy a character as was ever found in the annals of noir. Edward G. Robinson is again solid as Chris, believably anchoring the film in the quasi-reality required for the pulp scenario to work. Chris, the supposed master artist, in painting Kitty has the event ironically reduced (by the arch observer Lang) to the subservient or fetishist act of painting her toenails! Lang also invests a sharp moment of black comedy in the return of Chris' wife's first husband, long thought dead, but who'd actually faked his own death to escape his harridan wife. Lang follows through with the dark comic subtext by filming Chris at home, napping in a chair, but has the scene staged and lit as if Chris is in an electric chair, about to be executed for his crime. In this urban hell, everyone is looking for a means of escape, an angle for advantage, and everyone has their reasons.

The Lang-Bennett-Wanger company survived to produce one more film in their deal with Universal, Secret Beyond The Door in 1948, and Lang went on to the greater noir glories of Clash by Night and The Big Heat. Scarlet Street affirms the noir mastery of Lang, an under recognised father figure of the form, and for many years one of its finest proponents. Lang, like a great artist, utilised the obvious fakery of the studio sets to create a disturbing bizarro world, a parallel universe where dark currents pulsated and evil flourished, Sturm und drang indeed. In this he understood the Renoir dictum, that one does not reveal what is real by merely showing what is real, a poetic or surreal perspective is often more enlightening. Not only did he remake this film from a Renoir original, he would do it again when he tackled La Bête Humaine in Human Desire a few years later. If none of Lang's American films had the shattering impact of his seminal German productions, they contained sharp work from a man who steadily added to the language of the genre every time he stepped up to the plate. Scarlet Street might not be an address you'd want to live at, but it's an intriguing place to visit. 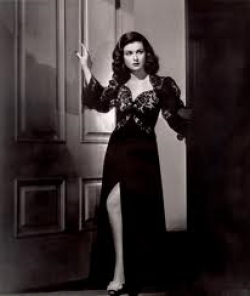 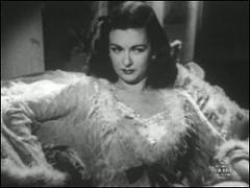 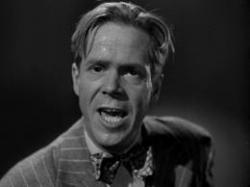 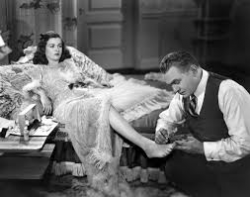 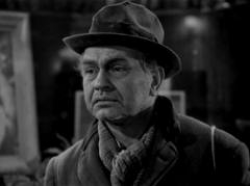