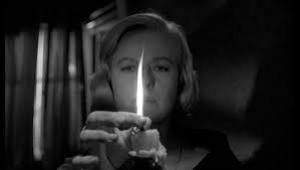 Séance on a Wet Afternoon

Bryan Forbes continues to be one of the most criminally overlooked directing talents in the British film industry, but in partnership with the late Sir Richard Attenborough he produced a handful of superb films, of which Séance on a Wet Afternoon  is one of the best. Richard Attenborough (he hated ‘Dickie’ apparently) founded Beaver Films with Forbes, after working as actors together, often in Forbes scripted films like the hugely entertaining, The League of Gentlemen.  Attenborough took the key leading role of Billy in Séance on a Wet Afternoon,  the ineffectual and hen-pecked husband to the determined medium, Myra, a role which they had a lot of trouble filling. After being turned down by Deborah Kerr and Simone Signoret et al, they settled on New York stage veteran Kim Stanley, a chancy move as she was a novice in cinema, but they were gifted with one of the most extraordinary characterisations in British cinema as a result.

Myra Savage (Kim Stanley) is an ambitious medium who holds a regular séance on Wednesday afternoon’s to a small band of followers. She convinces her husband Billy (Richard Attenborough) to participate in a scheme that will bring her the fame and notoriety for her abilities that she craves. The plan is to kidnap the daughter of a wealthy couple, then to ‘solve’ the crime as a psychic, telling the police where to find the girl and the ransom money. Billy is uncertain and hesitant to involve an innocent child, but bows to the will of his domineering and manipulative wife. Billy finds the courage to go through with the scheme but problems arise when he forms an attachment to the young girl (Judith Donner).

The film turns on the notion of exploiting the vulnerability of people consumed by grief or loneliness, of provided hope through a ‘spiritual’ interaction with the supernatural. Myra is damaged from and incident in her past and thinks she can converse with her dead son Arthur, and it’s plain that Billy lets her continue these delusions as a way to salve the wrenching event of losing their son. Billy’s compassion for his harridan wife sets up his character as a sympathetic one, but he nonetheless follows through with her sick plan. Billy meekly asks her “Why did you marry me?”  and she replies, “Because you’re weak, and you need me.”  Billy is torn by his devotion to and reliance on his wife and his repulsion of the consequences of the act he carries out for her.

Myra is no con-artist hoping to pull the wool over the eyes of the gullible, she is a woman deluded enough to believe the voices she hears in her head are other than her own, and yet her own damaged psyche makes her oddly sympathetic. Myra exploits weakness in Billy and in her followers, all people looking for ways to deal with the pain of loss, but fails to see she is also seeking the same relief. Kim Stanley, a stage diva who had little experience in film and even less regard for its demands, gave Forbes a difficult time, lost in a method fog for most of the shooting, but the results are astonishing. Kim Stanley manages a role that could easily slip into melodrama and keeps it edgy and unsettling, delivering a Myra that unnerves and repels as well as fascinates. She barely made any other films and had a nervous breakdown soon after, she was also deservedly nominated for an Academy award and won the New York Film Critic Circle Award for Best Actress.

As fine as Stanley is, she is matched at every level by Richard Attenborough in the decidedly less showy role of Billy. Richard delivers a genuinely restrained and underplayed husband who feels deeply about the dilemma he’s involved with, and when the time comes to make a stand he lets fly in memorable fashion. “It was you, it was always you”,  he spits at Myra as she refuses to admit the scope of the evil they are embroiled in, “He was born dead”,  he yells, of their deceased son, hoping to jolt her to her senses.  It is an amazing scene, delivered on the first take to an overjoyed Forbes. If a reminder is needed that Richard Attenborough was one of the finest actors in British cinema history, look no further. Forbes' wife Nanette Newman makes a lovely turn as the mother of the kidnapped girl, heartfelt and tender, the antithesis of the delude Myra.

Forbes adapted the novel from displaced Australian writer Mark McShane and collaborated with cinematographer Gerry Turpin to create the quasi-gothic atmosphere for the actors to work in. Myra is an eerie essay in progressive mental illness, brought about by the stress of losing a baby during childbirth, and we watch her unravel over the course of the narrative through the eyes of her devoted husband. It is a poisoned compact the couple have; a tragic deal that is equal parts shocking, sad and tawdry.

Forbes frames the piece superbly, somewhere between a gothic horror and a police procedural - with a dose of kitchen sink, reality bleak as embraced by the British New Wave.  The visual acumen is assured and adroit, the style as effective as any of the fine Brit flicks of the era, a tribute to Forbes ability to tell a story with great economy. The inter-cutting between the kidnap and ransom drop, with other, contrasting events is a fine example of balancing style and form, there’s even a nice accident where Attenborough is caught walking past a poster for the musical O What A Lovely War,  which would be Richard’s debut feature as a director some 5 years later!

Forbes’ finest turn as a screenwriter was undoubtedly the excellent The Angry Silence,  a coruscating look at class that gave Attenborough one of his most memorable roles and Bryan’s finest moment as a director may have been with the amazing King Rat  just a few years later. As an actor, writer and director Bryan Forbes left a remarkable legacy, of which Séance on a Wet Afternoon  remains proudly at the forefront, a lasting testament to his fine and brief partnership with the brilliant Sir Richard. Both gone now after rather fine runs, it’s unlikely we’ll see their like again.

Bryan Forbes is not generally seen as part of British New Wave movement, possibly because of his personal politics (he was on the right whereas most of the New Wave directors like Lindsay Anderson, Tony Richardson and Karel Reisz were on the left) but his work stands up with the best of them. In a fine body of work, Forbes films like Whistle Down The Wind,  a delicate and touching fable of childish innocence in a harsh environment and The L Shaped Room,  a fine and subtle essay on class in England, serve to remind that film categorisation is an inexact science at best, as they fit perfectly into the British New Wave slot, possibly not a slot an individualist and iconoclast like Forbes would be keen on?

Séance on a Wet Afternoon  is a brilliant and under appreciated film from a golden age of British film, engaged in reconciling post war Britain to a new, emerging realism that emanated from the kitchen sink dramas of the ‘50s, and providing a link to the fabulist future of the Swinging Sixties, barely a few years away. The fact that it also contains an inspired score by the master John Barry, a composer of the highest order, only adds a sweet icing to an already tasty cake. 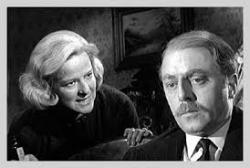 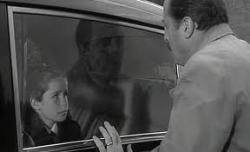 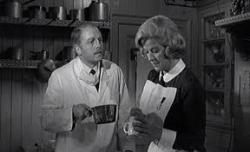