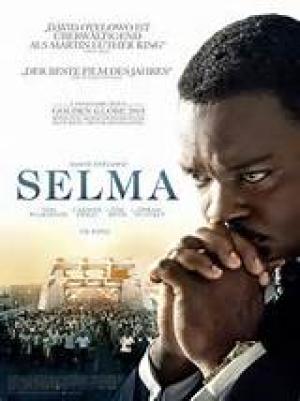 Uneasy lies the head that wears the crown

The thoughts on Selma were posted last year, but I've added a few words as a foreword in light of the Charleston tragedy.

After the seminal struggle for Civil Rights through the '50s and '60s, white liberal America, as represented by mainstream media, seemed to have taken the line that, especially after electing a black man to the White House, America was somehow living in a post racism world, think again. A potent mixture of latent bigotry, poor gun control, entrenched poverty and the divisive and disingenuous agenda of the right have led to the country repeatedly confronting the stark reality of racial tension still beating in the dark shadowland of festering resentments and putrid ideologies.

Racism is 'normalised' by subtle signals still present in general American life, just as guns are 'normalised' in their ubiquity by the passive acceptance of them as a constitutional right, these new normals need to be recognised and rejected so that the tide begins to turn. How can it be normal for a black pastor to propose the bizarre and disgusting idea that all Pastors should be armed, which is what happened on Fox News in the aftermath? He'd just been saying how hard it was to be a Christian, being that you had to love your enemies, turn the other cheek, et al, and then casually said he'd carry a gun so that he could shoot back! The question now seems to be "What would Jesus shoot"?

Dylann Roof spouted racist nonsense straight out of Birth of a Nation  before allegedly shooting dead 9 people because of the colour of their skin. At this early stage it seems clear we are dealing with a disaffected white boy who has embraced the poisonous ideology of his Confederate forebears and, echoing Charles Manson, has attempted to ignite a race war. Of course if he'd been radicalised by foreign ISIS propaganda and killed the victims in the name of Allah, there would be a different spin by he proprietors of the right wing media, who have been at pains to deny the central race component at every turn. Fox News tried to spin it as part of a so called War on Christianity and others deflected race and invoked it as being part of a drug problem. Rick Perry carved a singularly idiotic position by calling it an "accident".

America needs to confront several issues in regard to this and other events. It needs to examine the underlying alienation in a society that enabled a nondescript and unremarkable young man to act out his murderous fantasies. The casual and 'normalising' effect of having symbols of a racist past paraded and revered needs to be debated - can you imagine Germany flying flags of the Third Reich as a nod to their glorious past? Also it needs to address the complicity of the right in urging men like Roof to "take our country back", as if these vapid and poisonous pronouncements from behind the fortress of golden microphones would have no consequences. This is a situation that has reached a particularly shrill level since Obama's election, and the tone and nature of much of the criticism of the President has been nothing short of racist hate speech.

The other key issue that Americans struggle to deal with is, inevitably, that of guns, which is a many headed Hydra mixed up in a quagmire of politics and capitalism. The nonsense trotted out by the NRA, that somehow any restriction of gun ownership is an affront to 'freedom' and against their constitution is clearly specious, and yet somehow this threadbare argument flies in the heartland. The dirty truth about the NRA is that it used the Civil Rights struggle to scare white America into arming itself against the rising black movement, effectively using the tactics of militant organisations like the Black Panthers against them. The real winners are the gun manufacturers who continue to make a killing, in every sense of the word, aided and abetted by the egregious NRA and their blatant and cynical twisting of the constitution for their own ends.

If America remembers the lesson of Watergate, and follows the money, it will quickly work out who benefits from the current situation. The gun lobby is well funded and well organised, and Obama is right to shine a light on their nefarious agenda when every other comparable country has nothing like the level of gun violence that America suffers under. If 32,000 Americans every year were killed by Islamic terrorists umpteen billions would be spent to find and fix the problem, but the fact that Americans kill Americans to that extent seems to pass invisibly in the political debate, due to the power and influence of the gun lobby. Normal, decent Americans, who greatly outnumber the gun nuts and who wish to live  free of fear, need to call out the NRA and others for what they are and to organise against them to take back the agenda. Until they do they are condemned to suffer more Columbine's, Virginia Tech's, Sandy Hook's and Charleston's as the arms dealers and their associates continue to exploit fear and  ignorance as they count their profits knee deep in blood.

One of the defining issues of the late 20th century, in America particularly, was the issue of race, and one of the uncomfortable truths in the 21st century is that it continues to be. In the wake of Ferguson and Statten Island in 2014 comes this timely look back at a pivotal moment in the civil rights struggle in the 1960’s, the march from Selma to Montgomery in Alabama, led by Dr Martin Luther King. Inexperienced director Ava DuVernay shifted the original script’s emphasis on the King and Lyndon Johnson relationship and has managed to make an intimate portrait of flawed characters caught in an epic drama. Ably led by a first rate cast (with many Brits in the key roles) Selma  s a restrained and economical re-telling of one of the central events in the long march to equality, and after the Church shooting in Charleston in 2015 by a young, white racist, the need to embrace the lessons Selma throws up is more needed than ever and shows just how far the long march has to go.

The film opens with Dr King being given the Nobel Prize for peace in 1964, the same year that President Johnson signed the Civil Rights Act, the culmination of many years struggle to end state sanctioned segregation. King realises that unless the barriers that African Americans experience when registering to vote are removed in the South, true equality will remain a pipe dream. He hectors the President, who is reluctant to legislate to improve the situation, and the two appear at odds. King decides to up the ante by leading a march in Selma, knowing that the racist sheriff there will likely provide the requisite confronting images for nightly TV news shows to beam into the homes of the comfortable white middle class.

Selma  also touches on the inbuilt and generational inequality that the Negro had inherited in a post Jim Crow environment, “What’s the use of being able to sit at the lunch counter if we can’t afford the burger?”  he asks, “worse still, can’t even read the menu.”  King knew that the game was rigged, and even though segregation was now illegal, and the Negro technically had the vote, until mass registration, leading to a more representational democracy, change would not come. King has to walk a fine line, keeping a respectable and legitimate front so as not scare off the liberal whites, but this stance alienates the hardliners on his side, who accuse him of being an ‘Uncle Tom’ activist. Johnson prefers King’s brand of non-violent protest to that of radicals like Malcolm X, and walks a fine line in a tricky political high wire act.

Far from descending into hagiography, even if it does succumbs a touch too much to the ‘great man’ theory of history, the film works because of the superb central characterisation of Dr King by British actor David Oyelowo. Selma  presents King as a man who wants a ‘normal’ life, caught in a maelstrom and compelled to carry on through a sense of duty and moral compunction. King was the figurehead, but many voices are heard in the struggle, debating the level of engagement with the bigoted whites who refused to accept the law of the land. Recalcitrant State Governors, like George Wallace (Tim Roth) attempted to hold back the tide of change and exploit white fear to their own political gain, and Johnson had to balance these fools on one side and racist lunatics like J. Edgar Hoover on the other. One of the disputed aspects of the film is its depiction of a meeting between Hoover and Johnson where they plot to undermine King, as there appears to be no convincing evidence that Johnson was involved in Hoover’s mad schemes. Hoover did send Coretta Scott King tapes of her husband having sex with other women, but it’s dubious that Johnson knew or approved of the tactic.

DuVernay approximates a neo-realist palette, avoiding trying to add dynamism to the visuals by artificially moving the camera or with quick cutting, thereby creating a docu-drama feel with an authentic flavour of the time and place. This allows the narrative to flow and the characters to achieve real connection as they meld seamlessly into the fabric of the piece, letting us observe them as real humans and not cardboard historical figures. The Dr King we are presented with here is no saint, he is a flawed and conflicted individual who has to juggle personal difficulties with the expectations of his followers, and sometimes he succumbs to the ever present temptations. One of the pivotal scenes is where King and his wife listen to a tape of the Baptist Minister having sex with one of his mistresses, sent to her anonymously but bearing the imprimatur of the specious FBI boss - it’s stomach churning and confronting, a compelling personal backdrop to the world shattering events surrounding a struggling married couple.

* One of the interesting sidenotes to the production was that DuVernay couldn’t get the King family to allow rights for the actual speeches King gave at the time. The family had already signed the rights across to Stephen Spielberg for a mooted bio-pic he was working on, so DuVernay wrote her own versions of King’s speeches by replicating the cadences and patterns of well known recordings of the good Doctor. She succeeds superbly and in the hands of the very gifted Oyelowo, who captures the rhythms and nuance of King's oratory skills, they resonate with truth and meaning at every level.

Civil rights in America were won and enshrined in legislation during this halcyon period, but true change is yet to come with the inequalities of generations still embedded in a culture dominated by old white money. The racist cops of Ferguson were happy to exchange emails belittling their President after he was elected in 2008, and much of the shrill opposition he encounters is obviously racially driven. Selma  is a timely and shameful reminder that barely 50 years ago this struggle needed to take place, indeed it’s stunning to think that Obama’s parent’s marriage would have been illegal in many of the states of the union at the time. The film could have been drearily sanctimonious or even lapsed into lazy and cheap hagiography, but thankfully it adds to King’s remarkable legacy by giving a fuller picture of a conflicted man in the centre of the hurricane. 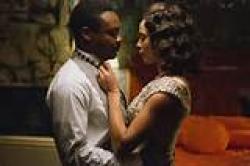 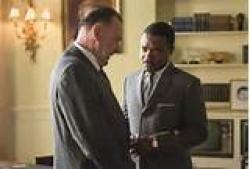 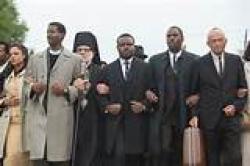 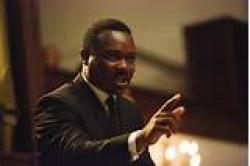