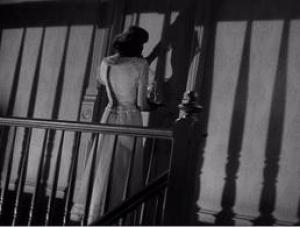 Shadow of a Doubt

Alfred Hitchcock always counted 1943’s Shadow of a Doubt as one of his personal favourites, made during the war and through a period where he was studio hopping, on loan while working off his four-picture deal with David O. Selznick. Hitch had spent some effort in encouraging America to enter the war with his Foreign Correspondent, in 1940 and made his ‘fifth column’ entry with Saboteur, made at Universal after Pearl Harbour blew away the isolationists. Shadow of a Doubt represented his first American thriller not directly influenced by the war, and allowed him to get down to basics without incorporating politics or propaganda, the result being a razor sharp, darkly comic suspense film, and a pointer to future, mature Hitchcock masterpieces.

“They’re bluffing, they’ve got nothing on me”, so says Uncle Charlie (Joseph Cotton) as he looks out of his cheap hotel at his two burly pursuers. Uncle Charlie decides to lay low with his sister’s family on the other side of the country, and soon he’s cosily ensconced in their average home in average town, anywhere USA. Charlie (Theresa Wright) is giddy with excitement at the arrival of her Uncle, after whom she was named, and thinks the event is just what the family needs to get it out of the comfortable, small town rut into which it has settled. Uncle Charlie’s past soon catches up to him, and he has some fast explaining to do as Charlie tries to reconcile her growing suspicions that he is not all he appears.

Of all his early American films this one is, in many ways, the most personal, and is heavily invested with key Hitch concerns, always in concert with his most important collaborator, his wife Alma Reville. Shadow of a Doubt is one of several of his early films where Alma took a shared writing credit and Hitch did not, even though Hitch worked extensively on the script with his hand-picked choice, playwright Thornton Wilder. The film can be read as a comment on evil penetrating a benign and ordinary environment, Hitchcock certainly loved the idea that it put murder “back into the home, where it rightfully belongs”, a quote he later attached to television. The film benefits enormously from the literate dimension of Wilder’s contribution and the humour of Reville and Sally Benson, the credited co-writers. The dark hued humour, especially surrounding Charlie’s father Joe (Henry Travers) and his nerdy friend Herb (Hume Cronin) and their fascination with the efficacy of differing methods of murder provides a delicious counterpoint to the brooding build up of tension in the main narrative.

In keeping with a Hitchcock truism, the villain is suave and capable and brilliantly realised by Joseph Cotton with an understated performance that provides the unease at the heart of the film. Hitchcock presents Uncle Charlie as an entirely reasonable man fro the majority of the running time, evincing our empathy until we finally see the evil behind the façade. Cotton delivers a deathless soliloquy about rich widows, “useless women, fat, faded, greedy women”, that reveals the level of his spite, and tellingly it barely rates a ripple on the dinner conversation because of the prior murderous prognostications from Joe and Herb, allowing Charlie the luxury of hiding in plain sight.

Teresa Wright’s young girl role more closely resembles one of Hitch’s ‘wrong man’ tropes than a typical girl next door or ingénue part, given her dilemma. Her Charlie has an almost mystical quality, as she interprets Uncle Charlie’s sudden appearance as an answer to her secret wish, “He heard me”, she delights, as she later rails against her small town destiny. “I don’t like to be average” she tells her paramour. Uncle Charlie will attempt to exploit her idea of a mystical bond, just as he would use any knowledge to exploit the women in his path. Superstition and mysticism are scoffed at by Uncle Charlie, subtly shown by Hitch when he throws his hat on his bed, against the warnings of mystical Charlie that it’s “bad luck”. Uncle Charlie even manages to 'marry' his niece in the scene where he puts an illicit ring on her finger, a sly perversity that is pure Hitchcock, adding a layer of sexual tension for those 'in the know', and completly missing the average viewer.

The small town American feel was beautifully realised by location filming, a rarity for the time, and it’s possible Wilder suggested Santa Rosa as a location. The combination of Wilder’s famous feel for small town ambience in his style and the use of real locations gives the film an effortless verisimilitude. Hitchcock was able to create a semi-surreal atmosphere in many of his studio only films, using the ‘fakeness’ almost as a key piece of the puzzle, but here he blends studio sets with reality in a seamless and fluid fashion.

Alfred Hitchcock was used to near total control over his art during his late British phase, but in David Selznick he found a producer writ large, one who wanted to know and be involved in every detail of every one of his productions before approval was granted. In Hollywood, in 1940, it was very much a producer’s game and Hitch had to get used to negotiating a different landscape with power players like Selznick. Their partnership started with a bang, after an aborted attempt to film a version of the sinking of the Titanic, the pair won Best Picture with their first production, Rebecca, in 1940. Ironically, Hitch preferred to be working on loan and away from Selznick almost immediately after as it afforded him greater freedom, but the result being the four pictures he owed Selznick took 8 years to complete, and represented only one-third of his output during the time. Selnick put up with it because in Hitch he had a prestige property who was obliged to attach Selznick’s name to any loan-out.

Sam Goldwyn attempted to poach Hitchcock via a clandestine deal in 1943, but Selznick got wind of the plan and wrote Goldwyn a scathing letter that revealed a lot about the pair’s relationship. Selznick also shed light on Hitchcock’s own view of Shadow of a Doubt, he wrote, “When you told Hitch he shouldn’t be wasting his talents on stories like ‘Shadow of a Doubt’, and that this wouldn’t be the case if he were working for you, what you didn’t know was Hitchcock personally chose the story and created the script. And moreover, that he is very happy about the picture, which I believe he has every right to be. Further, that in the years since I brought Hitchcock over here from England…… he has never once had to do a story that he was not enthusiastic about” Selnick and Hitchcock were too strong willed to survive a long term partnership, and they parted company amicably in 1948, but obviously Hitchcock would have been happier at the potential freedom he now enjoyed. Hitch may have had the last comment on Selznick, when the Cary Grant character in North by Northwest is asked what his middle initial ‘O’ stands for, he replies “nothing”. Ouch.

Shadow of a Doubt belongs in the first rank of Hitchcock properties, brilliantly directed, beautifully shot in black and white by veteran Universal cinematographer Joe Valentine, and superbly acted by a first rate cast. The film sits happily with many of the first Noir masterpieces, even if it’s not usually associated with that grouping, but it more than deserves a place at the table. Hitchcock soon went into the last of his war time pictures, Lifeboat, a wonderful claustrophobic ensemble piece, before happily having Ingrid Bergman foist upon him by Selznick (and not so happily Gregory Peck by Fox) for the uneven Spellbound.  In a bloodless essay on the evil that lurks just beneath the surface in average-ville USA, Hitch anticipates David Lynch's Blue Velvet by 50 years, managing to hide a scathing comment on the unseemly underbelly via the charismatic and charming lady killer. Uncle Charlie, who smiles as he says "Do you know the world is a foul sty"? to his increasingly bewildered niece, also anticipates a post WWII cynism that would make Billy Wilder blush, and yet Hitch got nothing like the blowback Wilder got for his critiques of his adopted country. Hitchcock delivered the message with style and suaveness, so subtle it went largely unnoticed, a poison pen letter hidden in a classy and entertaining thriller. Formidable filmmaking, ahead of the game and essential viewing. 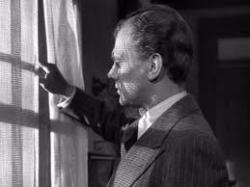 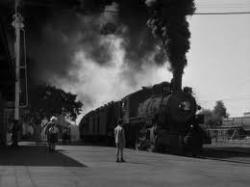 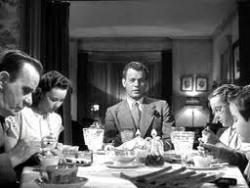 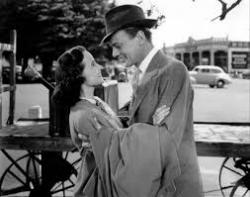 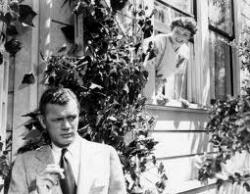 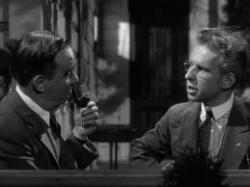 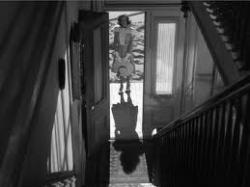 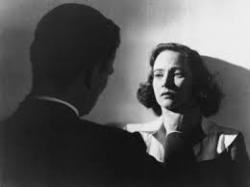