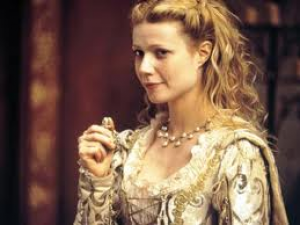 Willy with a bard on

John Madden directed this heartfelt valentine to the theatre, an affirmation of the power and depth of great art and a beautiful restatement on the inspirational nature of love. The script had been around for several years, and actually went into production some 8 years earlier at Universal, but fell over when their Viola, Julia Roberts withdrew her support. The director of that version was Ed Zwick, who insisted on Tom Stoppard doing a re-write, years later he became a producer on the final version, after Miramax opted for John Madden to take the directing chair. American actress Gwyneth Paltrow, who had already displayed a great ability to master an English accent in the charming 'Emma' in 1996, headed a typically accomplished cast of British thespians, and proceeded to totally inhabit the vibrant and detailed Elizabethan world that Madden and the superb sets had provided for.

William Shakespeare has writer's block, "my quill is broken" he tells his 'shrink', and is set upon by creditors at every turn, with demands for work he's already been paid for. He is living the life of a single man, his much older wife remains in the provinces, and he inhabits the lowest rung of social strata as an actor and writer. The 'moneylender', Fennyman (Tom Wilkinson) presses the theatre owner Henslowe (Geoffrey Rush) for payment, and Henslowe insists he has a new play from Shakespeare, 'Romeo and Ethyl, The Pirate's Daughter', that will make them all money. Henslowe holds auditions, and a 'boy' trying out for Romeo fascinates Shakespeare by delivering a Shakespeare audition piece instead of the usual Marlowe. He follows him home and finds the lovely Viola (Gwyneth Paltrow) at a formal dance, falling instantly in love, and regaining his muse. Viola wants to act, and can only do so by impersonating a boy, and as 'Thomas' wins the part of Romeo. Shakespeare becomes aware of the subterfuge and is distraught when he discovers Viola must marry the penniless nobleman Lord Wessex (Colin Firth). Shakespeare struggles to complete the play, and to win his love from the oily Lord, who plans to take her away to the New World.

The film is a joy at so many levels, and a working knowledge of Shakespeare is not essential, but it helps. Madden sets out the action by using the 'play within a play' device and by using the various tropes Shakespeare and his contemporaries employed in trying to get bums on seat in the competitive theatre world. The narrative takes some liberties with the timelines of actual events, but retains enough authenticity to create and maintain as plausible what is a fantastically entertaining conceit. The jokes run thick and fast, particularly at the expense of 'Kit' Marlowe (Rupert Everett), Shakespeare's main rival. The narrative arc of Will and Viola mirrors that of the lovers in Shakespeare's fiction, or rather he writes for them from his and Viola's experiences. Any Producer's concerns are mercilessly lampooned; all Henslowe wants is "love, and a bit with a dog" to pull in the crowds, and when Fennyman asks him who Shakespeare is when he takes over rehearsals he replies, "nobody, he's the author". It was ever thus.

The dialogue is sparkling, and given full reign by a superb array of Brit character actors particularly by Judy Dench, as the acid queen Elizabeth, "she's been plucked since last I saw her, and not by you", she tells Wessex when he brings Viola for royal approval of their marriage. Excellent turns are provided by Martin Clunes as Burbage, and Simon Callow as a petty official. Rush and Wilkinson offer typically Shakespearian comic relief, and Ben Affleck holds his own as the actor who plays the title role in 'Mercutio', a change made by Shakespeare to drag in a box office name. It's Affleck's character who insists on a better title, 'Romeo and Juliet'. The overlapping of history and fiction continue as Will and Viola outline his next play, as requested by the Queen for the Twelfth Night holiday, and it includes a young woman going overseas, leaving her love for duty, shipwrecked as a lone survivor on a far way shore.

The idea that a woman of substance married for love was a new one, and the Queen advises that "duty must be paid", Viola must play her part in the real world and leave her 'stage life' behind. The theatre is an illusion, and Viola has been part of it, and in sympathy the Queen agrees that she knows something of a woman struggling in a male dominated world. As a woman, Viola is in love with the idea of love, so much so that a bet is placed with the Queen to be judge, i.e. that a playwright can manage to say something true about love. As Shakespeare's world falls apart Henslowe tells him he need not worry, it will all work out in the end, "It all ends well", and when asked how he merely shrugs, "no one knows, it's a mystery".

Joseph Fiennes, an actor from a large and artistic family, created a convincing young playwright, a Shakespeare for the ages as he holds the role together with his worried brow and nervous energy. It's a poised and centred portrayal, his Shakespeare is a man in love and inspired by it's possibilities. Paltrow carries off the difficult role of Viola/Thomas beautifully, and produces one of the more luminous and stunning cinematic creations in recent years. She fills the screen with an elegance and poise that recalls Grace Kelly at her best. The two create a symphony for dreamers, something for the London masses to immerse themselves in and forget the daily struggles of Elizabethan life.

'Shakespeare In Love' is the best of mainstream cinema. It is not pretentious and does not over stretch it's brief, it does not pretend to be anything other than what it is, a perfectly aimed and executed entertainment. It was charming enough to find a massive audience and light enough to win a Best Picture Oscar, but that damns with faint praise, when full-fledged praise is deserved and appropriate. A film for lovers and dreamers. 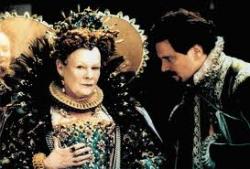 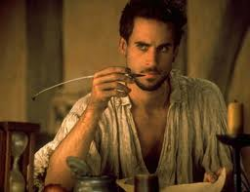 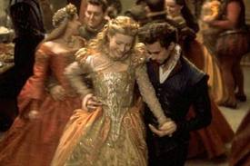 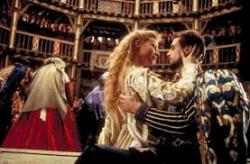