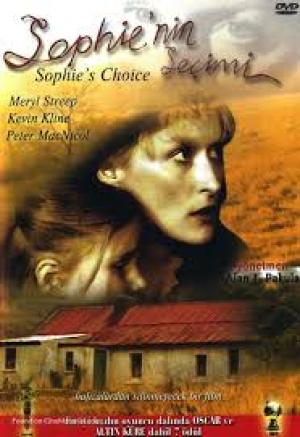 "Leave me to the thing I love. I love acting. But being called 'the greatest living actress' - a designation not even my mother would sanction - is the opposite of good or valuable or useful. It is a curse for a working actor." ~ Meryl Streep

Alan J. Pakula adapted William Styron’s titular 1979 novel himself and after wanting Norwegian actress Liv Ullmann to head the cast, he relented to a strong campaign from Meryl Streep and cast her in the title role. The decision proved to be inspired as Streep delivered one of the great characterisations in screen history, and was matched in all regards by Kevin Kline, a theatre actor making his film debut. Néstor Almendros, the master Spanish cinematographer and Nouvelle Vague alumnus, shot the film in delicate, realist tones and Marvin Hamlish provided a suitably low-key, sympathetic score.

Stingo (Peter MacNicol), a young writer from the south arrives at a Brooklyn boarding house, having travelled north to follow his dream of a career in literature. He encounters a battling couple, the beautiful Sophie (Meryl Streep) and Nathan (Kevin Kline), her drunken husband. After the initial difficulties he gets to know them well and they become firm friends as Stingo understands that the friendship comes with the demons they both carry.

Pakula delivered a first-rate meditation on the quiet (and not so quiet), desperate lives of damaged people and gently probes both cause and effect. The detailed portraits of the three central people involved adds up to a canvas of thwarted hope and melancholy, leavened with splashes of joy and tenderness, in the ultimately troubling tale of how the past stays with us. The protagonist for the reveal is Stingo, a young and ambitious southern author who becomes embroiled in the lives of a troubled, if devoted couple at the same boarding house in Brooklyn after WWII. Stingo falls in love with Sophie as he struggles to find his authorial voice, but he also shares a firm friendship with Nathan, which leaves him conflicted and unsettled. The bizarre love triangle turns upon Stingo’s innocence and naiveté, Sophie’s beguiling and mysterious character and Nathan’s vicious mood swings, as circumstances propel them into revealing past injuries.

The film turns completely on the figure of Sophie, and Styron apparently wanted Ursula Andress as Sophie, a notion which seems ridiculous given that Swiss actresses sex goddess screen persona. Liv Ullmann would have been wonderful, her delicacy and stillness would certainly have brought something to the part, but after seeing what Meryl Streep did with it, it’s simply impossible to imagine anyone else as Sophie. In a stellar career where Streep’s roles are justifiably measured in awards by the kilo or truck load, this performance may be her crowning glory, it’s that good. She runs the gamut and does it with a convincing Polish accent, like Ginger Rogers doing it backwards and in heels, it’s a role with a high degree of difficulty and Streep nails every inch of it. She is breathtaking, beautiful and unforgettable as Sophie.

Kevin Kline had filmed his version of Pirates of Penzance, where he'd reprised his Tony Award winning role of the Pirate King, but that film came out after Sophie’s Choice, so this remains his film debut. He is simply mesmerising in the demanding role of the schizophrenic Nathan and matches Streep in the rollercoaster dance of misery and love. The relationship of the star-crossed lovers is the meat of the piece, and the only weaker note is the performance and role of Stingo as rendered by Peter MacNicol. Perhaps Pakula wanted to contrast the bite of Streep and Kline with something softer, but MacNicol didn’t have the delicate touch to add dimensionality and make the part sing. It doesn’t sink the film, as it’s much too strong in every other element, but it makes you wonder what a William Hurt might have done with it.

Pakula brilliantly distilled the book to its essence and brought a formal clarity to the piece as he dissected the lives and loves at its heart. The journey of the young writer, to fall in love with the exotic Sophie only to find the shattering truth of her history, is beautifully framed and wonderfully realised. The mood Pakula created for the story to unfold was authentic and tasteful, but the performances are where the film excels, of two lovers trying to hold off reality by hanging on to a dream that was never really viable. The chimera of a loving, secure future is always just beyond their reach and the wrench of a tortured past is never far away.

The shattering central event in the film is possibly the most famous component, having entered the lexicon as an expression of an individual having to make an impossible choice. It may hang, expectation wise, like a sword of Damacles over proceedings, but Pakula handles it very deftly and does not overplay what is an iconic moment. It passes in such a way and is so matter-of-fact that it speaks to the banality of evil, to the utter bare faced nature of man's inhumanity to man when all measures of humanity and civility are stripped away. Pakula realised that the moment did not need anguished and extended close-up's and a syrupy score to underline or highlight what is a mind bending moment for any thinking human. Once seen, never forgotten.

Sophie’s Choice is a reminder that behind many an unlikely façade, a human story of unbelievable tenderness, complexity and tragedy can exist. Stingo comes from the sleepy south and bumps headlong into the legacy of the Nazi concentration camps and urban mental illness in a boarding house in Brooklyn, and his innocence is lost. Styron set the piece in a time when mainstream America was gearing up for a growth bonanza in its standard of living as its citizens sought to bury the memory of the war under a basket of consumer goodies. Sophie fled war damaged Europe and ended up in the relative peace and calm of Brooklyn, but her ghosts were never far behind and the suburban dream was not enough of a salve to heal her deep wounds. She clutched at Nathan as a drowning woman might grab at a lifeline, not realising that she was a lifeline for him and that neither of them were strong enough to swim for two.

Alan Pakula had a distinguished career as a producer, mostly with director Richard Mulligan, before he turned his hand to directing, to great success. He directed three masterful ‘paranoia’ films in the 1970’s in Klute, The Parallax View and All the President’s Men, and Sophie’s Choice sits proudly with those superb films as a worthy example of his undoubted skills. Sophie’s Choice is a mature work, considered and layered, and the product of a director in total command of cinematic language aided by inspired work from Meryl Streep, acting that belongs in the top rank of all-time screen performances. 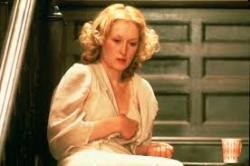 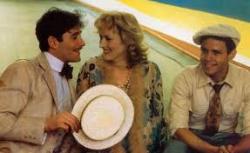 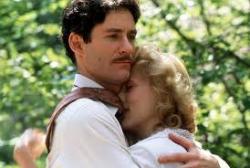