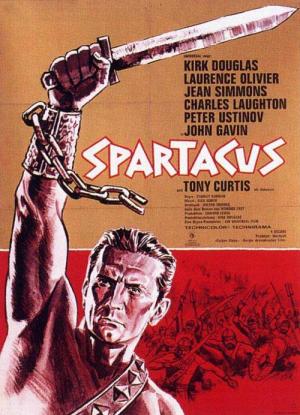 The film had a long and complex genesis, but it's roots are explained by the Hollywood Studio impulse to outdo it's competition in television by providing large scale spectacle on a big screen, and by Kirk Douglas missing out on the lead role in Ben Hur. At the tail end of the 'sword and sandals' cycle Douglas' Bryna production company bought the rights to communist blacklisted writer Howard Fast's book on the First Century BCE slave revolt led by a Thracian slave named Spartacus. Douglas attempted to have a prestige writer like Lillian Hellman or Dudley Nichols do the screenplay but all refused and he fell back on the cheaper option of a blacklisted member of the 'Hollywood Ten', Dalton Trumbo. Anthony Mann was employed by Douglas to direct, more noted for his noir and western films, but after a week of filming Douglas grew unhappy with his methods and fired him, asking Kubrick to step in and fill the breach. Kubrick took the opportunity to change the casting of Varinia from untried Sabina Bethmann to Jean Simmons, but stayed with the other major actors including Brits Laurence Olivier, Peter Ustinov and Charles Laughton.

Spartacus is purchased from the salt mines by slave trader Batiatus (Peter Ustinov) who trains his human property in the mastery of gladiator skills to entertain the masses in Rome. Spartacus is picked to be a combatant to the death by a group of rich, thrill seeking Romans that includes legendary patrician Marcus Licinius Crassus (Laurence Olivier) and in the process the conditions are created for a revolt at the school. Political infighting in Rome sees Glabrus (John Dall), a protégé of Crassus, sent to take on an army of slaves that has gathered to follow Spartacus. Eventually Crassus and Spartacus meet on the field of battle and the might of Rome prevails. Trumbo softened the faux history lesson with a romantic sub plot involving a slave woman who Spartacus has forced upon him at the school, and who he finds again once he's free, Varinia (Jean Simmons). Crassus attempts to woo Viriana but the wily Gracchus arranges for Bataitus to spirit her away, past the crucified slaves of the revolt as they line the Appian Way.

Kubrick took to the challenge with relish, knowing he would rarely get the chance to helm a multi-million dollar epic, and used it to add to his wellspring of cinematic knowledge. He extracted an intensity out of the gladiator school scenes, foreshadowing his use of the drill instructor many years later in Full Metal Jacket and argued successfully to include a large scale final battle between the two camps, which he then insisted be particularly gruesome by the standards of the day. Kubrick framed the large set pieces like a gigantic chess game, and gave the outdoor scenes a sense of movement, perspective and depth. He proved equally adept at handling such uber-thespians as the British contingent, even taking their suggestions to favour indoor locations for their complex intrigues as playing those scenes outdoor robbed them of impact. Laughton makes the most of the labyrinthine machinations of Roman politics, and his rivalry and dislike of Olivier, which was reciprocated, helped give them an added piquancy. Ustinov stole the show as the toadying, obsequious Bataitus and became the only actor to win an Oscar in a Stanley Kubrick film. Douglas does a good job of coping with the physical and emotional requirements of the part, and his trademark intensity fits the part nicely. Kubrick was happy to play up the homosexual overtures that Crassus makes to the slave Antoninus (Tony Curtis) in a scene in the bath that was cut, but eventually restored in a 1991 version, Olivier's voice dubbed by Anthony Hopkins. Kubrick was fortunate to inherit such a talented 'classical' cast, and their approach and skill, combined wityh his visual acuity and epic scope elevated the piece well beyond the usual Roman 'tits and toga' nonsense so prevalent in the '50's.

Kubrick's feelings about Spartacus were mixed over the years, but no doubt coloured by the fact it was never really 'his' film, it was essentially a job of work for a big Hollywood star. Nonetheless it has elements of pure Kubrick about it, the cooly detached military moves, the fluid camera and angular set up's. Veteran Universal cinematographer Russell Metty, who worked so effectively with Douglas Sirk on his colour masterpieces and misunderstood 'women's' pictures, and also with Welles on Touch of Evil was appalled that Kubrick gave him every detail about the set up's in advance, including the choice of lens and complained to Douglas, but Kubrick's attention to detail and visual eye led to Metty winning the Oscar for Spartacus, the only one in his long career. The score by Alex North is brilliant, one of the very best and the credits by the inimitable Saul Bass are stylish and elegant.

Howard Fast wrote the book while in prison for contempt after his HUAC appearance in 1950, and the theme of the rights of the common man under an authoritarian state was apposite in light of the witch-hunt, and also in light of the burgeoning civil rights movement, which was even more central to the life of the nation by the time of the film's production in 1959. Trumbo must have taken a certain pleasure in writing the lines for Crassus when he's dealing with Rome's shifting political allegiances, 'The enemies of the state are known, lists of the disloyal have been compiled '. Ultimately what Trumbo asserts is that Crassus doesn't fear Spartacus, as much as the idea of Spartacus, that is what he represents as a symbol of hope and change, a challenge to the natural order of things, of the Patrician 'born to rule' ethos. However loose Spartacus is with the actual history, in that it's wide of the mark on Crassus and this Gracchus didn't exist, it is accurate that the needs of the lower classes became a higher priority with ambitious politicians, and soon it would be Julius Caesar who was able to harness the support and destroy the Republic.

Trumbo claims that Douglas wanted a blacklisted writer to work cheap, or for 'cost', and the trade off would be they would get a screen credit and the blacklist will be broken.. In any event the production went way over time and Preminger's Exodus was the first film to officially credit a blacklisted writer, and it again happened to be Trumbo! Anthony Mann's dismissal also seems to have been more about his focus on the other actors like Ustinov who's improvisations Mann approved of, as the footage Mann provided in the opening salt mining scenes were all used in the final cut. Ustinov wrote some of his own dialogue and remarked it was one of the only epics to not include Jesus, even though there is a fairly lame attempt in the opening narration to indicate somehow the uprising set the ground for the rise of Christianity!

Spartacus is an intelligent and literate epic, if not totally representative of Kubrick's genius, and many subsequent productions regarding that era owed it a debt, including (ironically) Anthony Mann's own The Decline and Fall of the Roman Empire. HBO's mighty series Rome in the early 21st century takes many of it's tropes from Spartacus and delivers a complex and satisfying treatise on Roman politics of the time. 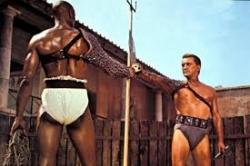 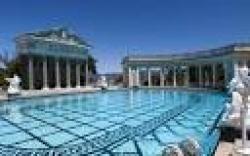 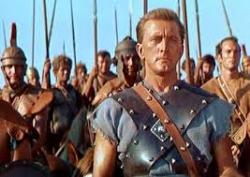