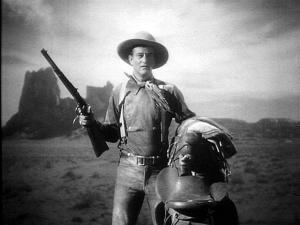 60 years before reality TV shows were throwing disparate types together and filming the resulting conflicts and interaction, Dudley Nichols and John Ford conducted their own social experiment, on wheels and at speed to boot. Coming in the middle of a Ford golden patch, it redefined an entire genre almost overnight, in a way few films (except maybe Kubrick's 2001) get to do. The film is a masterpiece of self containment, it could almost have been a stage-play, at one level internal and claustrophobic, but counter-pointed by the stunning wilderness of MonumentValley. It brings every human foible into stark relief, the petty concerns of ants across a vast, indifferent landscape.

Ford rolls out a lot of stock personalities, the heart-of-gold hooker, the raffish gambler, the timid salesman, the drunkard doctor, the loyal soldiers wife et al. The cast are more than up to the task, John Carradine's riverboat gambler and Thomas Mitchell's alcoholic Doctor are particular standout's. Claire Trevor is the perfect love interest for Wayne( innocently unaware of her true profession) and being judged not on her past for once. These actors end up virtually defining most of these types for the rest of cinema history. None is more able than John Wayne. It's surprising that Ford allegedly said "I didn't know the son of a bitch could act' 10 years later, after seeing him in Hawks' 'Red River', but then that was Ford being Ford. Wayne is perfectly at ease in the role, and his natural style in this type of role pre-dates Brando if truth be told, the natural intersection between part and actor. He was certainly limited in a way a method actor may not be, but when used properly and directed empathetically, there was no one to touch him in the iconic roles. This was Ford's genius, he was a bully and a poet, an artist and an arsehole. He cajoled, demanded, pushed, prodded, patted, stroked and teased a role out of an actor. If the role was well cast the results are peerless, and here he struck gold.  Ford bullied John Wayne mercilessly, mocking his 'fairy' walk, but he met his match in Thomas Mitchell who shot back at the bullying director when a barb was hurled his way, 'It's okay, I've seen Mary of Scotland', referring to Ford's great box office flop.

The period was an especially fertile one politically, and Dudley Nichols succeeded in capturing some of the anxieties of the time allegorically in ways that would not be seen again until Foreman's 'High Noon'. The fable of a 'little community' banding together against an outside aggressor was a rich one as the left leaning American 'popular front' organisations like the Motion Picture Democratic Committee, of which Ford was a vice president, supported the fight against fascism in Europe, and he can not have been unaware of the coming conflict. Ford retreated into 'patriotism' in 1939, Stagecoach eulogised the pioneers of the west, and 'Drums Along The Mohawk' and 'Young Mr Lincoln' celebrated the war of independence and the great President as a young 'jackdaw' lawyer. Politically 'Stagecoach' leaves you in no doubt as to Nichols and Ford's leanings, the 'heroes' are an outlaw and a prostitute, and the villain is a corrupt and effete banker! Ford's politics would take a lurch to the right in later years, but here he lines up with community and collectivist sentiment.

Ford places this disparate band in harm's way, the route being taken under threat by Geronimo, so each passenger has a compelling reason to be on that coach. The destination is Lordsburg, and it does indeed represent salvation of sorts for some of the travelers. or release from earthly pressures for others. Balancing expertly comedic elements, drama and action Ford forges a template that is used to this day. His star making close up or The Ringo Kid was a deliberate strategy to set Wayne on to a course to the 'A' List, languishing as he had in B films for 10 years, as had the western genre if it comes to that. Ford uses silent techniques in framing and pacing, but not in a way that undermines the narrative, but enhances it. The scenes between Ringo and Dallas, courting in the moonlight are pure visual poetry and worthy of Murnau or Von Sternberg in their subtlety and grace. That he could then move to the Indian chase and shootout in the main street finale speaks wonders of his total command of the medium.

Ford made a lot of non westerns, but like Ringo's drums, they 'loom large in his legend'. He defined himself jokingly in a famous Directors Guild meeting called by Cecil B DeMille to confront the commie menace, 'I'm John Ford and I make westerns'...  and then proceeded to tear C. B. a new one, and privately retracted everything shortly after with DeMille! Pretty much from that time onward westerns dominated his output, so he obviously knew a thing or two of his own intentions. He cut his teeth on cheap silent westerns, but with 'Stagecoach' he elevated the form to serious art, utilising every trick in the book such as painterly cinematography, razor sharp editing, well written and precise dialogue. He pulled the genre out of it's infancy and B picture status, showing that a good story is timeless, and valid in any setting. People like George Lucas would take it out into space some 40 years later. 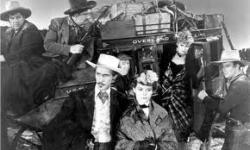 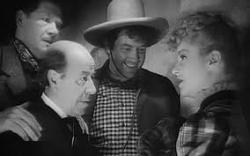 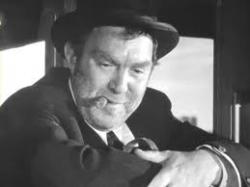