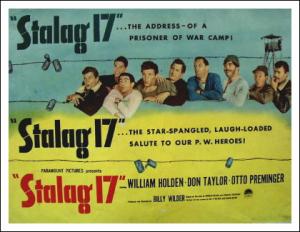 Billy Wilder was coming off the box office flop of Ace In The Hole, one of his most cynical  diatribes against the American dream, but was not yet ready to flick the switch to lighter Lubitsch style comedies or romances, they would have to wait while he again dipped his toe into sardonic waters with the tragi-comic POW tale Stalag 17. Wilder was still between regular collaborators having split with his partner of 13 years, Charles Brackett, after disagreements over their 'Sunset Boulevard' co-write and would not take up with I.A.L. Diamond until 4 years later with his film Love In The Afternoon. Wilder was obviously attracted to the edgy and ground breaking play upon which he expanded, as war films of note until that point had not included any prisoner of war perspective, a difficult and sensitive subject, and one that the film treats in a multi-dimensional way. William Holden's career was rescued from mediocrity by the success of Sunset Boulevard and Wilder talked him into taking the lead of the scheming and cynical Sefton, and also persuaded him to play it as written where Holden had wanted to soften the broadly unsympathetic character, rewarding the actor with the Oscar for the confident and convincing performance.

Wilder engaged several of the players from the successful Broadway run and in Robert Strauss as Animal he unearthed a real screen talent, as he provided great comic relief with his partner in fun Shapiro (Harvey Lembeck). The ensemble acting effort is always in great support of the script, and Wilder proves himself very capable of handling a large cast, giving each key player enough scope to provide detail and nuance. Otto Preminger stepped into a role that had Erich Von Stroheim written all over it and proved adept at being an authoritarian prig, not much acting required said those who knew him or had been directed by him. The style of the filming is fluid and crisp, with the claustrophobia of the barracks not preventing Wilder from opening out the action where required, in partnership with Ernest Laszlo, best known for his film noir efforts like Aldrich's Kiss Me Deadly.

Wilder found a cynic after his own heart in Sefton, and sets up his bleak pragmatism from the start, having him run a book on the survival prospects of two escaping comrades, the sound of tolling gunfire merely has Sefton ask, 'double or nothing'? Sefton is all about the odds and risk, an uber-capitalist where everything is a commodity and as such is following a survivor's mentality, one that will allow him to walk out of the 'dog eat dog' camp at the end of the war. Wilder doesn't dilute Sefton's character with any of the world weary romanticism that a Rick in Casablanca represented, where the inherently good man is uncovered once called to action, this is a very unlikable lead and a deep, dark, truthful mirror to hold up to any audience. Sefton's dilemma is that his separateness as the camp operator also marks him as suspect number one for the spy that the prisoners know exists in their midst, given the success of the German's in foiling their plans. Sefton's profiteering, perfectly acceptable in civilian life, is seen as 'un-American' almost in the collective confine of the barracks, and even when his goods are purloined by the 'masses' for distribution to the 'masses' not a negative sound is heard about this socialistic move.

The vain camp Commandant (Otto Preminger) sees an opportunity to enhance his nonexistent prestige with his Berlin superiors by presenting them with a captured American, Lt Dunbar (Don Taylor) who is accused of blowing up a munitions train in defiance of the Geneva convention. Dunbar is a rich kid from the same area as Sefton, and was promoted because of his family wealth in Sefton's eyes, where Sefton is a self-made man at every level. Dunbar is betrayed and the men are convinced Sefton is the villain, and in a true Hitchcock-ian dilemma Sefton knows he must find out the identity of the spy in order to save his own skin. Wilder's attention to detail and ability to sustain the tension and suspense are at the heart of making the film work so well. Sefton even manages to gather some audience sympathy for his plight, no small achievement from so unlikable a character. What makes it work is that Wilder mostly convinces us that Sefton's philosophy, while not the most palatable in the camp, is actually the most honest, so that even if Sefton's decision at the denouement has an element of the mercenary about it, we can grudgingly respect him for it. 'The crud did it', as his nemesis says.

In a post 'Hogan's Heroes' universe it's salient to recall how politically and culturally incorrect it was at the time Wilder made the film, to suggest anything comic in relation to a POW camp. The tone of the piece walked a knife edge and thanks to the brilliant dialogue, the sure footed ex-Broadway cast and the keen eye of the director it all cohered beautifully so that the drama and the comedy were equally effective. Wilder would  retreat from his uber-cynical phase after 3 highly charged and critical pieces in a row, and made romantic comedies and romances for the next half dozen years, before returning to his acerbic best with the superb The Apartment in 1960. The success of Stalag 17 not only led to the thinly disguised TV rip-off, but paved the way for blockbusters like Bridge On The River Kwai and The Great Escape, and also the excellent and  overlooked King Rat by Bryan Forbes.

* A sour postscript exists in Paramount's attempt to alter the film for a German release, they sent Wilder a note saying they would change the villain's nationality from German Nazi to Polish! This to a man who lost his mother in the gas chambers at Auschwitz. Wilder sent back a protest and heard nothing in return, he then tore up his remaining 3 picture contract and left the studio after an 18 year association. 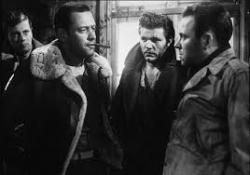 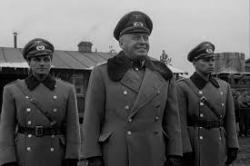 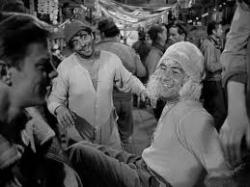 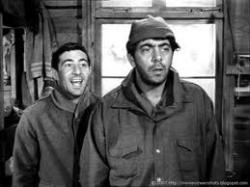