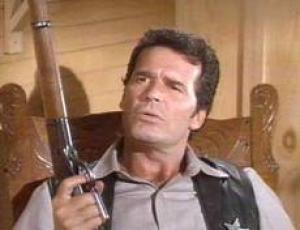 The huge success of Cat Ballou  in 1965 almost gave re-birth to a much neglected genre, the comedy western, harking back to the Golden Age of Hollywood and films like Destry Rides Again.  Soon after a raft of worthy successors like Support Your Local Sheriff  and Butch Cassidy and The Sundance Kid  were sending cinema audiences into chortling fits and providing work for a slew of familiar western character actors like James Garner, Jack Elam and Walter Brennan. Not only actors took advantage of this turn towards the funny bone, but writers and directors who had worked in the western genre for years as serious and dramatic practitioners, like Burt Kennedy and William Bowers, were also cracking wise. Kennedy was a war hero who wrote most of the seminal Ranown Cycle westerns for Budd Boetticher and Randolph Scott, before becoming a director and Bowers had written no less a masterpiece than Henry King’s, The Gunfighter  in 1950.

A gold rush town in Colorado falls into lawlessness until a drifting cowboy, Jason McCullogh (James Garner) takes the job as Sheriff. Jason needs money because of the ruinous rates of inflation, “sometimes it catches ya between mouthfuls”  as the town tries to squeeze every drop out of the flood of prospectors. Jason demonstrates his prowess with a gun, and takes his place in a prison with no bars. He sets up in the Mayor’s (Harry Morgan) house and begins a rocky relationship with Prudy (Joan Hackett) the Mayor’s daughter. Jason arrests Joe Danby (Bruce Dern) the none-too- bright son of a local despot (Walter Brennan) and fights to introduce law and order to a frontier town, all the while making no secret of the fact that “basically I’m on my way to Australia”.

Bowers and Kennedy were both associated with lean, no nonsense productions, and so it is with Support Your Local Sheriff,  an unpretentious if subtly subversive piece. The film arrived at the peak of the counterculture and the character of Jason seems like a Zen adherent let loose on a Mack Sennett set. Kennedy evokes the simpler times of the silent era slapstick films with several sequences but overlays a laconic feel courtesy of a relaxed performance from Garner. The film pokes fun at the idea of a macho gunslinger, Jason decries his ability with a gun “this is no way for a grown man to make a living”,  before he drives a bad guy gunman out of town by simply throwing rocks at him. Jason throws the onus of law and order back on the town, “Is this the kind of town you people want to live in?”  and encourages them to collectively lift the standards of propriety. This is a libertarian call for community action in an environment mostly associated with authoritarianism, an indicator of the social mores of the counterculture, indeed Jason seems more like a pot smoking socialist than Sheriff.

Cat Ballou  also re-invented the career of tough guy actor Lee Marvin who won an Oscar for his role as Kid Sheleen and revitalised the possibilities for the western, which had long fallen into cliché because of the plethora of Network TV shows. One of the finest of the TV shows was Maverick,  which made a star of James Garner and allowed him to move into features with great success, making a hit in The Great Escape  and a couple of Doris Day programmers. Garner was superb as a serious actor in the darkly satiric The Americanisation of Emily  in 1964, from a Paddy Chayevsky script and proved a capable dramatic lead in the clever 36 Hours , in 1966. Garner’s easy charm proved a winning match for the laid back hero Jason, and he went on to make a sequel in 1971, Support Your Local Gunfighter  ( also with Kennedy) and to also make the sharp satire, Skin Game, both well suited to his Maverick persona and hugely popular with audiences.

Burt Kennedy was a veteran of many fine westerns with John Wayne’s company, and after writing several lean and gritty scripts for Ranown he moved into directing his own scripts, the majority of them westerns. Kennedy had directed a couple of hits for Henry Fonda in the mid 60’s and The War Wagon in 1967, starring John Wayne and Kirk Douglas, saw his reputation reach its height in Hollywood. Kennedy’s unfussiness as a director lets the very straightforward tale unfold at a breezy pace and lets the situation and the characters do the work. Bowers packs the script with gags and situations where the smiles flow freely and errs on the side of broad comedy when in doubt; Madame Orr’s House is a clue.

The cast is chock full of familiar faces, professionals all who give the spine and authenticity to the piece without overplaying their hand. Harry Morgan is very fine as the Mayor, Jack Elam is wonderful as the deputy “I become one of the most belovedcharacters in western folklore”, he tells the camera in the 4th wall breaking denouement, and Joan Hackett is lovely as the ditsy daughter. The, always reliable, Bruce Dern’s almost stoner villain is also a varmint for the (hippie) times, and demonstrated again his angular persona, mastery of subtle comedy and is a reminder that he always gave something interesting and quirky to every role.

Support You Local Sheriff  is an unpretentious and highly enjoyable romp through an undemanding schedule of laughs, as Kennedy observes the misfit, Zen like central character bump into the broad rump of stock standard, western cow punchers. The idea of a ‘prison without bars’ holding the villain is a sweet hippie subversion of the usual western fare, but also works as a simple sight gag. It’s a sly comment on the flower power era ethos and its relationship to conservatism, the corrupt and duplicitous council standing in for ‘the man’, but the film succeeds mostly (and happily) on the surface rather than in the subtext. Kennedy’s love for the form extends to a nice nod to Ford and Fonda via the Sheriff balancing on his chair sequence as Walter Brennan makes a comic reprise of his superb villain in My Darling Clementine.  The success of the film paved the way for the even broader anarchy of Mel Brooks' Blazing Saddles some 6 years later.

The wonderful James Garner would again explore his Maverick persona on the hugely popular The Rockford Files  in the 1970’s, produced by his old Maverick  creator and based on old Maverick scripts. His effortless light comedy touch complemented the witty and well written series and his obvious humanity and charisma brought delight and flair to a hugely entertaining series. His death in July 2014 should be a reminder to all of a talented actor who left behind a fine body of work. Vale James Garner. 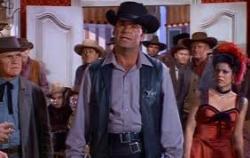 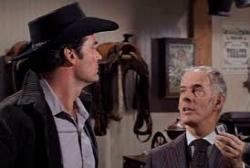 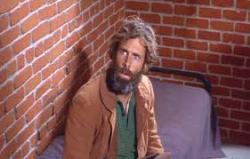 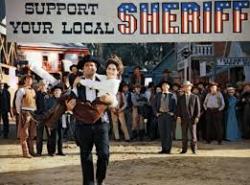 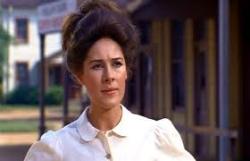