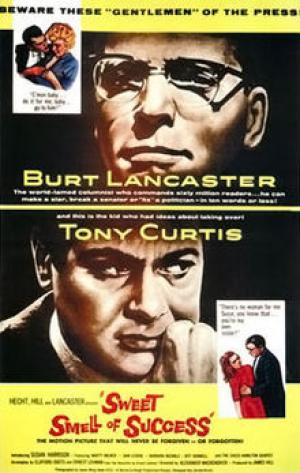 'I woke up one day a star. It was terrifying. Then I worked hard toward becoming a good actor.'
~ Burt Lancaster

Easily one of the greatest scripts ever filmed, every line perfectly in sync with the line before it and a dazzling display of the screenwriters art from Ernest Lehman and Clifford Odets. Sweet Smell of Success is a potent slice of mid-fifties urban drama, coming near the notional end of the cycle of the Film Noir genre and unexpectedly helmed by an American born Scot, Alexander MacKendrick, best known for his Ealing comedies. Moreover the film is a tribute to the taste and ambition of it’s star Burt Lancaster, he had the vision to produce the film and the balls to take the part of the detestable JJ Hunsecker, the evil and manipulative New York columnist who rules his ethics free kingdom with all the threat and cool of a great white shark and eyes just as dead. Matching him (‘match me Sidney’) every inch of the way is a startling Tony Curtis, perfectly cast as Sidney Falco the lugubrious publicity agent who’s well versed in ‘the theology of making a fast buck’. Perhaps the most bizarre element of the situation is that the function of the femme fatale, so pivotal in Noir in that it drives the motivations of the male protagonists, is fulfilled by that of JJ Hunsecker, and Burt whilst he often reveals his claws he never once shows his legs!

The action opens with some gorgeous shots of the New York streets from James Wong Howe, the cinematographer responsible for Body and Soul, one of the highpoints of the visual language of Noir. The jazz score is from Elmer Bernstein, adding atmosphere to the ‘live’ tracks of the Chico Hamilton group featured in the storyline, augmented by fictional guitar player Steve Dallas (Marty Milner). Steve is seeing JJ’s sister Suzie (Susan Harrison) and Falco has been giving the task by JJ of destroying the relationship, Falco has failed so far and JJ has cut him off from any mentions of his clients in the column, Falco’s bread and butter, ’you’re dead son, get yourself buried’ he’s told. Falco is a master of using people and gains the information that Steve has proposed to Susie, using it to get close to JJ in a nightclub. JJ is a myth for the first 20 minutes of the film, heard about but not seen until Falco sits with him at 21, the famous celebrity club, and JJ is seen in all his cut-throat glory. Lancaster’s appearance is severe and hawk like, his coldness accented by wearing rimless glasses. A call from another agent sees JJ cut him off and prompts an inquiry from the Senator sitting at the table as to what just happened, Falco educates him, ‘a man has just been sentenced to death’. JJ then tells the Senator his fortune in relation to the woman who is not his wife sitting next to him, the Senator thanks him eliciting a ‘go now and and sin no more’ from JJ. It’s plain he wields enormous power and is ruthless with it.

Falco wins himself another chance to kill the relationship and sets out to use rival columnists to plant a story smearing Steve as a drug using commie. An attempt at blackmail, using a story of a dalliance with a cigarette girl Rita (Barbara Nichols) comes unstuck with one, but Falco is not above pimping the same girl to another, Rita’s protestation of ‘What am I, a bowl of fruit’? has resonance with Willy Loman’s line in Death of a Salesman. Falco informs JJ that the wheels are in motion, Steve has been fired from his club, JJ surveys Times Square from his penthouse like some feudal lord from his fortress. Susie begs JJ to use his influence to get the band their job back, JJ meets Steve feigning concern. Steve is upset Falco is still in the picture, suspecting him all along of doing JJ’s bidding and insulting JJ in the process. Susie is confused, but her manipulative brother, at one point his hand behind her back intimates she’s a dummy to his ventriloquist, agrees to not see Steve again. JJ wants Steve harmed and initially Falco baulks at organising the beating but when JJ offers a deal involving Falco writing the column for 3 months he agrees. Steve is beaten by complicit and crooked cops, and Susie attempts suicide, saved only by Falco keeping her from jumping off the balcony. JJ finds Falco and Susie alone in her bedroom after the failed attempt and assumes falco has molested her, he beats Falco who gives away to Susie the reality that her brother was behind the plot to hurt Steve. Falco leaves and the same cops beat him up, as Susie, the one thing JJ cared about leaves, walking alone down one of the cold, cavernous avenues of New York.

Mackendrick does a brilliant job of keeping everything in balance, the city location shoot giving vibrancy and authenticity. The tone never falters, and the simple playing of the decent young couple in love is an effective inversion of the poisonous, symbiotic relationship between JJ and Falco. JJ uses words like weapons, his daggers applied with the skill of a surgeon. he asks a cop for news of a woman in a coma he’d written about for human interest, and upon hearing she’d ‘died 20 minutes ago’ merely says, ’That’s showbiz’. Fear of loss is a recurring theme and death, being the ultimate loss, is referenced often. Steve is the only one to stand up to JJ, and that’s part of the attraction for Susie, who’s been dominated all her life by her pathologically possessive brother. When JJ, mystified by what it is she sees in Steve asks ’what’s he got’?, Falco replies ‘integrity, acute, like indigestion’. Falco covets the perfume JJ wears, ‘success’, and he is prepared to sell his soul to the devil that is JJ to get it, Falco, who acts like a jilted lover with JJ, has no redeeming character at all, neither does JJ, who says admiringly of Falco at one point, ’I’d hate to take a bite out of you Sidney, you’re a cookie full of arsenic’. The boldness of having two such despicable characters as the leads is what makes the film so remarkable, that it failed at the box office should surprise no-one, nor its growing cult reputation among cinema lovers since. It’s the real deal, an American masterpiece. 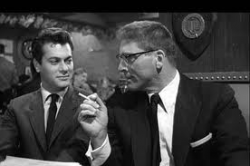 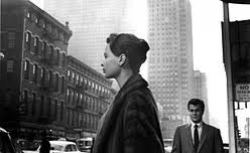 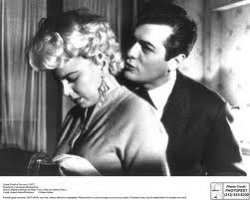 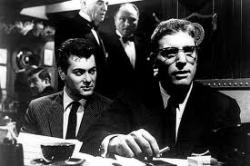 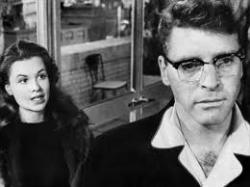